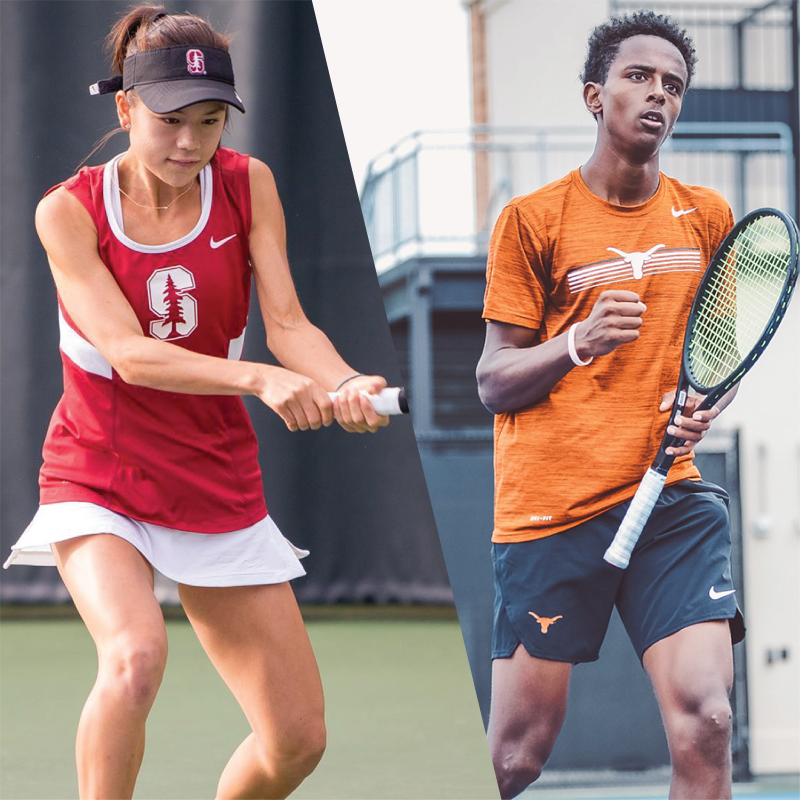 USTA Southern California has named its 2021 All-SoCal College Team, featuring players from the Section who represent SoCal tennis across the nation. The players were selected based on their competitive success, academic accomplishments, and their reflection of sportsmanship.

We congratulate these and all SoCal-based college scholar-athletes for their ongoing achievements as representatives of #TeamSoCal!

Emma Higuchi returns for her fifth year at Stanford, where she has compiled a career 94-18 singles record, with 42 more wins in doubles. From Los Angeles, Higuchi has accumulated as many academic honors as she has tennis accolades. She is a two-time ITA Scholar-Athlete and PAC-12 All American, and last year was named to the PAC-12 Honor Roll. The team has garnered two NCAA team titles during her tenure, along with three PAC-12 titles. To date, Higuchi is 3-0 on the young season.

Eryn Cayetano is the prototype junior player turned college scholar/athlete. Known as much for her relaxed demeanor as she is for her formidable game, Corona’s Cayetano is a perennial sportsmanship award winner and a burgeoning star for Alison Swain’s Trojan squad. Only a sophomore, Cayetano is the reigning USTASoCal Open Sectionals champion and earned an Oracle ITA Masters title in San Diego last fall before returning to USC, where she will follow up her 11-3 premiere season last year.

Rena Lin is a former SoCal junior #1 in both singles and doubles, and that trend continues as she enters her second year at Yale. Last year, She posted a 10-3 singles record plus a strong 9-2 tally in the #2 doubles slot. Lin, from Northridge, was an early recruit for the Ivy League school back in 2018, and plans to follow her career aspirations of relaying her experience to others as a future coach.

Delanie Dunkle, a Cal Poly sophomore and Engineering major from Arroyo Grande, was a Big West Women’s Tennis Athlete of the Week last February after an undefeated week that helped her team carry two unblemished dual match victories. This year the team remains unbeaten to date, with Dunkle posting a 5-1 record early on. She is also a talented and accomplished golfer.

Elizabeth Goldsmith is leading the spring revival at USD, where the sophomore has posted a 7-2 record to date for the Toreros in the 2/3 positions. She’s also 7-1 in doubles, helping the team to an unbeaten dual streak in which USD has won 28 consecutive matches. In her most recent action, Chula Vista’s Goldsmith teamed with Solymar Colling, a member of the 2019 All-SoCal team, to earn the team’s doubles point.

Keegan Smith has amassed quite a tennis resume while starring for Billy Martin’s UCLA Bruins. A senior in 2021, Smith owns a whopping 80-18 record over four years, with sixty more wins in doubles play. He emerged as a PAC-12 Rookie of the Year in 2018, only to become an NCAA doubles champion with teammate and current touring pro Max Cressy in 2019. A three-time ITA All American and History major from San Diego, Smith has been named the ITA Player of the Week on four different occasions. He owns two coveted USTA gold balls as a singles and doubles titlist at the National Open Hard Court Championships.

Stefan Dostanic is well into his sophomore campaign at USC, where he is a vital part of the team’s push for an NCAA title. In his first year, the Irvine native was 17-6 overall playing out of the 3/4/5 positions. He was named to the ITA National Team Indoor All-Tournament Team and ranked as high as #53 in nationwide doubles with teammate Riley Smith. This year, the Economics major has been rock solid, posting a 10-2 record to date and on the verge of breaking into the national top 100.

Siem Woldeab took his game from La Mesa to Texas in 2019 as a blue chip recruit among the top young players in the nation. He backed up that status with a 21-10 overall record in his freshman year with the Longhorns, primarily in the third slot. Adding 13 doubles wins, Woldeab earned 2020 ITA Texas Region Rookie of the Year honors. In tandem, Woldeab was named to the Academic All Big-12 Rookie team. When Texas knocked off #1 Florida last year, it was Woldeab who rebounded from a 5-0 hole to win eleven straight games and secure the team’s crucial first singles point.

Aditya Gupta made an early statement in his first year at Penn, when he posted an 8-1 single record in his first few months with head coach David Geatz’s squad. At the William & Mary Invitational in 2019, Gupta logged a perfect 3-0 record in both singles and doubles before closing his freshman campaign with a 16-5 overall record. A former Ojai champion, Orange County Player of the Year, and high school All American from Irvine, Gupta studies at Penn’s School of Engineering and Applied Science.

Kent Hunter transferred from Cerritos College in 2019 as an All American with a 28-1 record, joining the University of California Berkeley squad. He hasn’t looked back. The Golden Bear from Compton has thrived in two seasons, posting a 12-8 singles record in his inaugural year. He also notched six doubles wins, five of them with SoCal teammate Jacob Brumm. Early spring results, including a win over UNLV during Kickoff Weekend, are positive indicators that Hunter is geared up for a monster 2021 campaign.

Julian Steinhausen is off to a remarkable start in his first year at SMU. As a redshirt under the tutelage of coach Grant Chen, Los Angeles’ Steinhausen has posted a 10-3 record, including eight of nine match wins for the 10-7 Mustangs. Steinhausen’s success is no surprise – as a junior player, he was 11-2 opposite 5-star and 4-start recruits. Along with his five Southern Californian teammates, Steinhausen helped SMU to earn ITA All-Academic team honors in 2020.