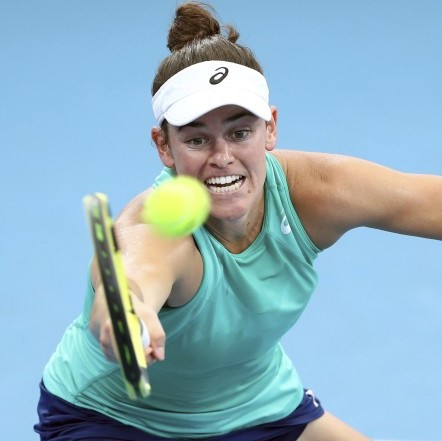 Jennifer Brady will play her first career major final this weekend when she meets Naomi Osaka for the women’s championship at the Australian Open. Brady’s previous career pinnacle was last year’s US Open, where she advanced to the semifinals, where she met Osaka in a three-set loss.

In Mixed Doubles, Desirae Krawczyk remains in the hunt for her first Slam title alongside teammate Joe Salisbury. They meet wildcards Stosur/Ebden in the semifinals for a slot in the final against Ram/Krejcikova, the #6 seed.

Former UCLA star Jennifer Brady is on to the semifinals at the Aussie Open after rebounding in her quarterfinal to defeat Jessica Pegula in three sets. Perhaps more significantly, top seed Ash Barty has been bounced from the top half of the draw at the hands of Karolina Muchova, who will now oppose Brady in the second semifinal. Serena Williams needs four sets in her favor to tie Margaret Court’s all-time Slam record, but standing in her way in the favored Naomi Osaka in tonight’s first semi. Even hundreds of miles away, SoCal tennis is poised to send shockwaves through the tennis world!

Coming into this month’s Australian Open, Serena Williams looked particularly fit, energetic, and focused on taking the next step in the pantheon of women’s tennis – tying Margaret Court’s all-time record for most Grand Slam titles. Williams, seeded #10, faced her most daunting challenge of 2021 in the quarterfinals, opposite #2 Simona Halep. Williams was her old self again, storming through a 6-3, 6-3 victory to propel herself into the semifinals. Williams will meet a familiar young adversary, #3 Naomi Osaka, who like Serena has dropped only one set in the tournament coming into the semis.

On the other end of the draw, Jennifer Brady continues to impress as she enters her quarterfinal against Jessica Pegula. Pegula ousted #5 Elina Svitolina before advancing, while Brady has so far avoided an encounter with a higher seed. Last year in New York, Pegula won their only career meeting.

Ena Shibahara and her teammate Shuko Aoyama were eliminated by the #2 seeds Mertens/Sabalenka in women’s doubles.

Mackenzie McDonald is the next American in position to stage a big upset at the Aussie Open. The former UCLA Bruin and NCAA singles champion meets Daniil Medvedev in the fourth round, hoping to tame the volatile World #4 for the first time in three meetings. “Mackie” won in straight sets over Lloyd Harris to advance.

McDonald’s fellow Bruin alum Jennifer Brady is on the fourth round as well, awaiting her match with #28 Donna Vekic. Brady ousted Kaja Juvan in routine fashion to advance, and Vekic is the first seeded player on Brady’s docket this week.

A big upset in men’s doubles, where top seeded Robert Farah and Juan Sebastian Cabal were upended in the second round by unseeded Bublik/Golubev. Farah, the USC alum, was seeking his 17th career title with Cabal. The duo won both Wimbledon and the US Open in 2019.

Ena Shibahara & Shuko Aoyama defeated Stefani/Carter to reach the fourth round. The win avenge a loss at the US Open to the same team, and sets up a quarterfinal with #2 Mertens/Sabalenka.

If Taylor Fritz needed any reminder that he can play with the big boys, look no further than his third round defeat at the Australian Open. The SoCal native hung with top seed Novak Djokovic throughout a thrilling five-setter that saw Djokovic lock up the first two sets before Fritz pushed back to even the match with two convincing sets of his own. It was not enough, as Novak secured the fifth, but the match was far and away Fritz’s best performance against the Serb in their history. It was the first time he’d taken a set from any of the big three – Djokovic, Nadal, and Federer – and nearly marked his first triumph over one of the game’s all-time elites.

Former UCLA Bruin Ena Shibahara & Shuko Aoyama advanced to the third round, again dropping the first set before hitting stride and closing their match with a 6-0 third set. They will next meet Luisa Stefani, a Pepperdine product, and her teammate Hayley Carter. Stefani/Carter advanced with a second round win in which they lost the first set and responded by winning 12 of 13 remaining games.

Former NCAA champion at UCLA Mackenzie McDonald is on track after a second round upset over #22 Borna Coric. McDonald advances in four sets, lining up a third round affair with South Africa’s Lloyd Harris.  McDonald also teams with Tommy Paul in the second round of doubles.

Jennifer Brady moves past Madison Brengle in a lopsided win to advance. She next meets Kaja Juvan of Slovenia, who ousted Pepperdine’s Mayar Sherif in three sets. Brady will also team with World #1 Ash Barty in doubles, against #2 Sabalenka/Mertens in the second round of pairs.

A hiccup for former USC Trojan Robert Farah and his partner Juan Sebastian Cabal, the men’s doubles top seeds. The pair dropped their first set of the tournament in a tiebreak, but rebounded to lock down a second set tiebreak before closing the 6-7(5), 7-6 (6), 6-4 win.

Taylor Fritz went the distance with fellow American Reilly Opelka in their second round match in Australia, with Fritz squeaking out the win in a five set thriller. After dropping the first set, Fritz won two of the next three consecutive tiebreakers before finding a little breathing room in the fifth to post a whopping 4-6, 7-6(6), 6-7(4), 7-6(5), 6-2 victory. Fritz next meets top seed Novak Djokovic, who defeated Frances Tiafoe to advance.

Serena Williams moves forward with a routine win over Nina Stojanović of Serbia. She continues her quest for a record-tying Slam title when she opposes Anastasia Potapova of Russia. Venus Williams, however, was stunned in a lopsided defeat at the hands of unseeded Sara Errani of Italy.

The #7 women’s team of Ena Shibahara & Skuko Aoyama dropped their first set to Jessica Pegula & Asia Muhammad but rebounded to secure their opening round match, 4-6, 7-5, 6-3. Shibahara is a former UCLA Bruin from Mountain View. She reached the third round in Australia last year.

Desirae Krawczyk and her partner Alexa Guarachi advanced in three sets over Bencic/Kenin, emerging from a third set tiebreak to earn the victory.

The Australian Open moves into the second round following a good kickoff for local favorites, as UCLA alums Max Cressy and Jennifer Brady are among those moving on in the year’s first Grand Slam.

Cressy advanced by capturing two tiebreakers inside a straight set win over Taro Daniel, lining up a second round meeting with #6 Alexander Zverev. The popular German ousted Cressy’s Bruin compatriot Marcos Giron in the opening round. Yet a third Bruin, former NCAA champion Mackenzie McDonald, won his opener in four sets and next meets #22 Borna Coric of Croatia.

Taylor Fritz will hope to control one of the most powerful serves on tour when he faces Reilly Opelka in the next round. Fritz dispatched Albert Ramos Vinolas in four sets to advance.

On the Women’s side, Jennifer Brady moves ahead after defeating Aliona Bolsova in a routine opener. She meets a familiar opponent, American Madison Brengle, in Round Two. Mayar Sherif, the former Pepperdine standout, has reached the second round with a straight set win over fellow qualifier Chloe Paquet and opposes Slovenia’s Kaja Juvan in the second round.

Both Venus and Serena Williams moved forward to round two, the latter looking especially fit and poised to finally notch a record-tying Grand Slam title in Australia.

Also on the docket Down Under, doubles action begins today in both Men’s and Women’s play. Look for Sabrina Santamaria, Desirae Krawczyk, Asia Muhammad, and Robert Farah among those seeking doubles wins this week. Farah is the top seed with teammate Juan Sebastian Cabal.

The Australian Open is underway late Sunday, with some of #TeamSoCal’s favorite pros in action as the year’s first Grand Slam arrives. Serena Williams and Taylor Fritz will be among those looking for a road to the finals in singles play, with Novak Djokovic and Ash Barty representing the top seeds in Melbourne.

Fritz will oppose Albert Ramos-Vinolas of Spain in the opening round. He enters as the World #30, six points below the career high he reached one year ago. Australia will be Fritz’s first tournament since November.

Another former Bruin, World #24 Jennifer Brady, will look to build upon her 2020 breakout season when she opens play in Melbourne against Spain’s Aliona Boslova. Former Pepperdine Wave Mayar Sherif moved on from qualifying to enter the main draw against Chloe Pacquet of France. Plus, both Venus and Serena Williams are favored to advance in their opening matches.