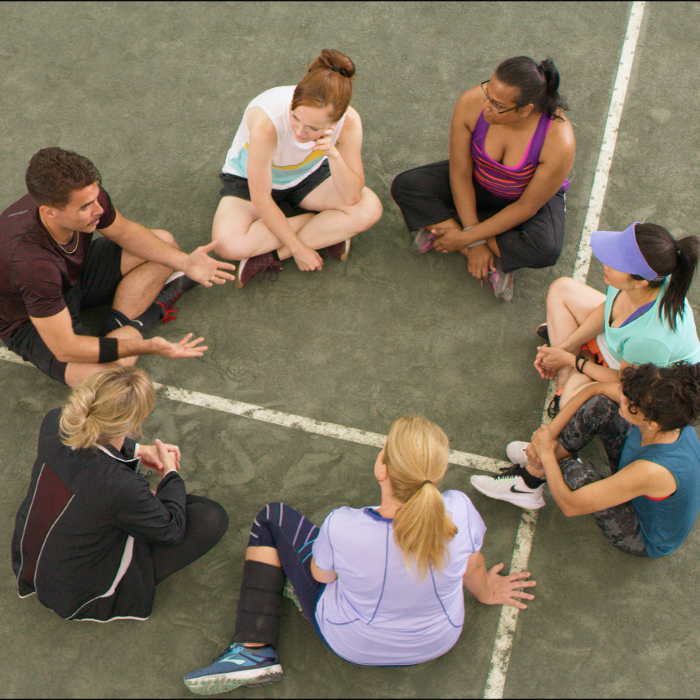 In Gina O’Brien’s comical new film First One In, the main character Madi Cooke (Kat Foster) joins a prestigious real estate firm led by a tennis-obsessed owner, and when the two finally cross paths on the tennis court, a whole lot of fun and drama commences. But somewhere in between, the movie depicts a multi-cultural side of the sport that is as refreshing as it is entertaining.

Fine-tuning her game for an ultimate showdown of skill and wit, Madi heads to the fictional Acme Tennis Club and finds her spot on the team led by tennis pro Fernando (Josh Segarra) and a team comprised of five diverse women including Valentina, played by Karina Arroyave (Crash, 24, Law & Order).

Both Segarra (Orange is the New Black, Arrow, The Other Two) and Arroyave are familiar with the game, having lived in favorable climates where tennis is a year-round activity.

“When I was a teenager, growing up in Longwood, Florida, I would casually pick up a tennis racquet,” Segarra recalls. “There were some courts down the street from my house. We’d hop on, and if they were locked, yes we’d hop the fence, and play some tennis. We were by no means any good, but we’d get a little better each summer.”

The film, which opened in September to a virtual theatergoing audience, has provided the actors with a detailed glimpse behind the scenes of competitive adult tennis, one that could easily teeter between an engrossing drama or a light-hearted comedy – in this case, the latter.

“I learned how seriously those on a team can take the game,” Arroyave says. “I knew that certain tennis stars were known to throw tantrums on the court, but doing this film showed me how almost life and death the outcome of a game can be. Personally, I think that’s great! I love when folks are passionate about what they’re involved with.”

Like many sports, entry points to tennis can be difficult for those entering the game. Both actors agree that introducing tennis at an early interval is essential for players to experience the full benefits of the game.

Says Segarra, “I would love it if young people were introduced to tennis at an early age. There’s something about giving a young man or woman the confidence to go out there, all by themselves, one on one, or two on two on this court, and just go. Silence all the noise, and just go. Those are lessons that can be taught while having fun and learning life skills, too.”

In the Hispanic community, Arroyave is quick to note that tennis can play a larger role than simply game, set, and match.

“I remember always feeling so happy when I was taking tennis lessons,” she recalls. “It’s physically challenging, but in an exhilarating (way). The physical aspect of it is so fun, much like dancing. Anything fun that makes you feel alive is very important for the Hispanic community.

“I also like the sense of accomplishment it can give you once you start getting a handle on what you’re doing. It’s a very positive, life-affirming way to spend your time. In a community that is struggling, you need as many life-affirming activities as possible.”

As for whether or not they will further develop their romance with tennis, both actors agree they are likely to wield racquets again. That means a little extra pressure for Segarra, the film’s fictional coach.

“The itch is there,” he admits, with a laugh. “I have to get really good. There’s no other choice now.”