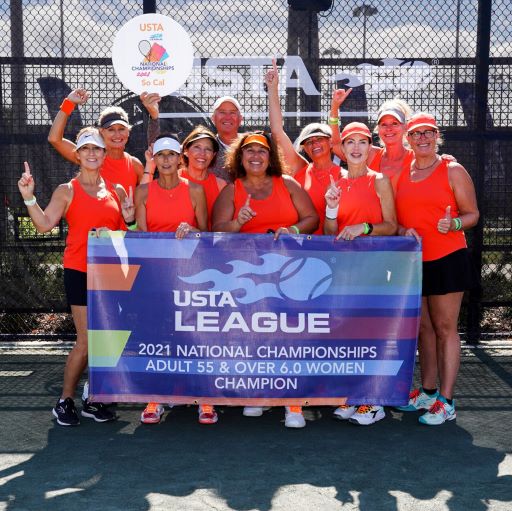 They were the underdogs going up against the hometown favorites at the recent 2021 USTA Adult League National Championships in Orlando, but the Bakersfield 55 & Over 6.0 players led Captain Laurie Haagsma overcame the odds to be crowned national champions.

It was the first time in 15 years that a Bakersfield team had won the Nationals. Known as the “Bako Heat”, the squad is coached by Chuck Beatty, a teaching pro at the Bakersfield Racquet where the entire team are members.

“The core of the team has been together for about four years,” said Haagsma, a grandmother of four. “Coach Beatty started working with us about two years ago when I became captain and said he thought we had a chance to do well at Sectionals and compete for a national title.”

Haagsma said she had a vision that the Bako Heat was going to perform well at Nationals. “We have such a special team and are all friends,” she said. “It’s been amazing to be a part of it.”

Bakersfield became a favorite among other teams as they continued to roll into the finals. “We would beat a team and they would all stick around and watch our next match,” Haagsma said. “They said they wanted to see the team that beat them win it all so they cheered for us.”

Seibly is the matriarch of the team at 72-years-old. Benshoof and Echeverria were undefeated in doubles. Both are parents to teenagers and have enjoyed playing league tennis the past several years. “Going undefeated and winning a national championships. It just doesn’t get any better than that,” Echeverria said.

DeJong started playing tennis when she turned 50. “I tell people I really need to quit my office job because it’s getting in the way of my tennis,” she said. “Playing in Florida at Nationals was an experience I’ll never forget.”