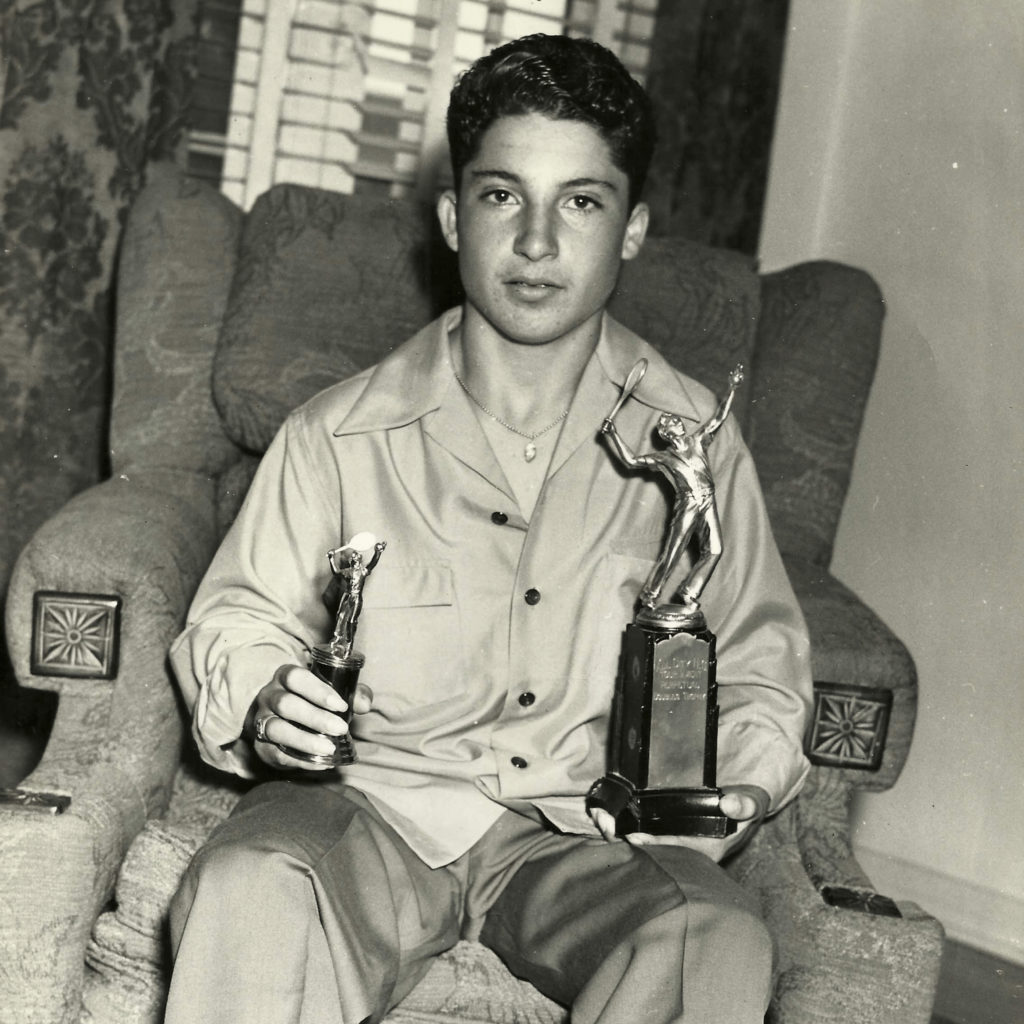 Roberto Enrique Perez was born in Los Angeles in 1924 to naturalized Mexican American parents. At 10 years old in 1934, he stumbled upon tennis when he went to a park wanting to play football but was told that he was too small. Instead, he was handed a tennis racquet, and thus began the decades long legacy of Bob Perez. He went on to play tennis at Manual Arts High School from 1940-1942, even winning the Los Angeles City Doubles Championship in 1942 and the 2nd place trophy in singles. Perez went on to enlist in the Navy and served 2 years before getting an honorable discharge, a time during which he won the Naval District Singles and Doubles Tennis Championships. Perez would go on to be a USC tennis legend, with two Pacific Coast titles and two NCAA titles, as well as playing a large part in helping Coach George Toley recruit Mexican stars Pancho Contreras and Joaquin Reyes. Despite his accomplishments as a young tennis player, Bob Perez would continue to make an impact in Southern California tennis for decades to come.

After graduating from USC, Perez played two years on the professional circuit, ranking as highly as #18 in singles and #2 in doubles alongside Bill Crosby. Perez was ranked #1 for three years in Southern California Open Doubles, and won numerous accolades, including being a finalist in the Pacific Southwest Tournament in 1955, a tournament which earned him the lifelong nickname of ‘Puma.’ Perez then embarked on a successful professional career with CBS, before he retired in 1977 and began to dive even further into tennis, as Marketing Director for the Tennis Grand Masters. Perez travelled the world with numerous tennis players including Pancho Gonzales, Bobby Riggs, and more. All the while, Perez was playing senior tennis in the 50’s age bracket and above, picking up numerous accolades as a senior as well.

After all of this, Perez and his family moved to Irvine in 1986, and he would frequent the UC Irvine tennis courts just to watch. As his daughter Paula Perez Dichiara says, “He would always wear his USC hat, and my father, he’s one of these guys that can’t help himself. He has to coach, no matter where he’s standing. So, he got to know the guys.” Eventually, Coach Greg Patton offered Perez the chance to assist the team informally, and from 1986-1988, Perez was an integral part of the UC Irvine Anteaters.

With UC Irvine, Perez helped develop four All-Americans and helped the team defeat USC, UCLA, Georgia, LSU, Cal, Stanford, and Pepperdine, all of whom were in the top 10. The team also had a highest ranking of #5 and went on to see both doubles team reaching the semi finals at the NCAA Championships in Georgia, with one pair playing against USC, seeing Perez wear two hats on that day. “After it was all over, he didn’t have his name anywhere,”  explained Paula. “But the guys made this really large photo of all of the guys on the team, and at the end of the season they presented it to him. So that was very nice, and it was a very nice experience for him.”

While at UC Irvine, helping develop future pro tennis stars such as current USTA Southern California Executive Director, Trevor Kronemann, Perez was also giving back to the community. “Bob “Puma” Perez played an integral role in the success of UC Irvine Men’s tennis in the late 80’s,” explained Trevor. “He simplified the game from experience and never wavered from his beliefs and convictions. His enthusiasm for our program made everyone better daily, not only on the tennis court, but in life. His impact still lives on in all that were lucky enough to work and play with him throughout Southern California tennis. His small stature packed a big belief.”

Perez had an impact that stretched from elite players, to grassroots players as well, leading coaching clinics in Boyle Heights for underprivileged youth as well as a member of numerous committees to help increase opportunities for tennis in SoCal. Perez would never balk at a chance to help spread his love for tennis, as Paula explained, people would always be asking him to come out and hit balls with them and their kids. Perez was even a tennis coach for numerous Hollywood stars such as Farrah Fawcett, Mel Brooks, and Carl Reiner.

Despite his star-studded history, Paula says the most important part of her father’s legacy is in how hard he had to work to achieve his dreams. Bob Perez grew up without a father from 10 years old, and in the early 1900s there were not a lot of opportunities for Hispanic people in tennis, even in Southern California. “He always promoted tennis as a great exercise, and a great sport,” said Paula. “He did very well for a guy that didn’t have a lot of opportunities to start with.” Even without a lot of opportunities to start with, Bob Perez carved out a place for himself in tennis as a high level collegiate and pro player, before doing everything in his power to help give back both to the Hispanic community and the tennis community as a whole.