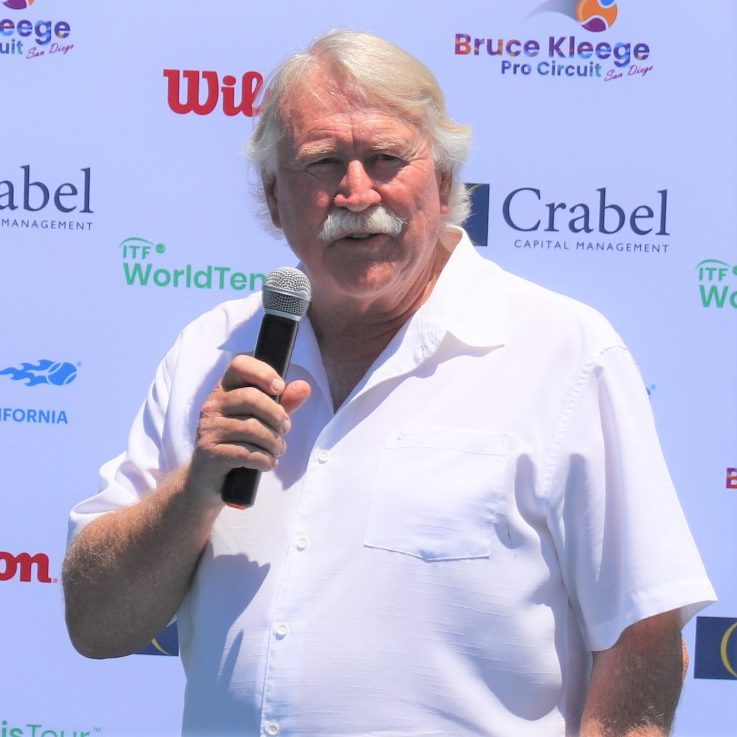 Bruce Kleege knows more than anyone the struggles facing young junior and college tennis players looking to make the transition onto the professional tour.

A former college All-American in singles and doubles at Brigham Young University, the San Diego native and current Rancho Santa Fe resident Kleege has recently studied the pro circuit landscape – as he has two 15-year-old twin boys who are freshman at Torrey Pines High School and among a core group of young SoCal players looking for opportunities to play for world-ranking points.

Where there were once 12 to 15 Pro Circuit Futures and Challenger tournaments a year in SoCal, only one or two ITF events remain on the annual calendar in Southern California.

“I’ve been to all the places and remember what it was like traveling to Japan and Africa,” said the 67-year-old Kleege, a major donor and financial sponsor to the newly launched SoCal Pro Circuit which began May 30 at Kleege’s home club at Rancho Santa Fe Tennis Club. “I remember playing in Bangkok and Taiwan and playing the Satellite circuit in the United States back in the day.”

So Kleege began thinking of ways to get more of these home-grown events to take place locally. He got together with good friend Lornie Kuhle and the two came up with the idea of a series of events where only SoCal players and those attended local college would be eligible for qualifying and wild card opportunities. Add in influential players from USTA SoCal like board members Chris Boyer, Executive Director Trevor Kronemann, Board President Bob Hochstadter and former pros like Paul Annacone, Pam Shriver, Marianne Werdel and Peggy Michel, who agreed that additional Pro Circuit events were sorely needed.

“It was really Lornie,” said Kleege of his North San Diego County neighbor. “I had an idea and he helped put me in touch with the right people to get it done.”

Kleege, who owns a real estate development company, graduated from BYU in 1977 with a business management degree right at the height of the tennis boom.

“I’ve been trying to figure out how I can put together a Satellite Tour,” said Kleege, who was ranked as high as No. 6 nationally in college. “I call it that because when you got out of college, and you wanted to play pro you would play the Satellites and that was the transitional tour.

You would play four or five in a row just to get one ATP point. But at least that was a way to do it.”

Kleege said his hope is for the SoCal Pro Circuit to be a model for other sections to follow. “I do hope it’s the building blocks to have many more of these,” he said. “I think you’re going to see results from these Southern California players who will have the potential to compete on the Challenger and ATP and WTA level. It will make a difference, and a couple of them will break through because of the opportunity.”

He’s happy he’s been successful in his business ventures to be able to give back to tomorrow’s futures pro players from SoCal.

“There was a need for me to step in and help out and that’s what I’m trying to do,” Kleege said. “This is a great opportunity for these kids. It’s a win, win, win. I really hope it grows over the next few years.”