For the Chung family, it's the kids that made tennis a family affair - USTA Southern California
Community News

For the Chung family, it’s the kids that made tennis a family affair 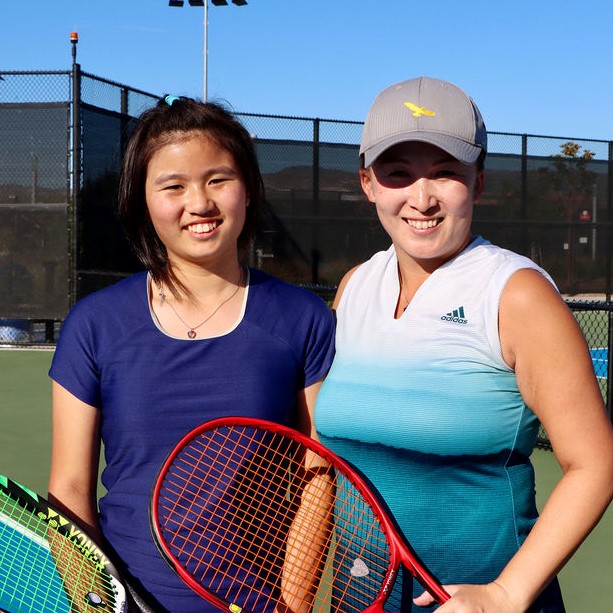 In many cases, adult athletes tend to share their love of sport with their children, often extending their athletic careers vicariously through their children. But in the case of Corona’s Risa Chung, being a tennis mom was actually what brought her onto the court as a player herself.

Rewind to the early 2000s when Risa met Benny, a casual tennis player who would in time become her husband and father to their children, son Ken and daughter Kei. Risa had never played tennis or been involved in the game, but when the couple introduced their growing family to a variety of sports, tennis was among those that resonated the most.

“When Ken was about 8, we sent him to the summer camp at a tennis club in our neighborhood,” she recalls. “That is when he started picking up tennis. When Kei turned 5, we decided to send her to a tennis lesson, but she would not want to do it alone, so I had to take lessons with her so that Kei would follow me to the tennis court.”

In time, the youngsters entered youth tournaments and joined Junior Team Tennis programs, while Mom and Dad watched from the sidelines. What Risa noticed from the outside was the fluctuation of emotions on the court, and how the kids coped not just with the physical game, but also the mental aspects of tennis. To better understand the experience, Risa immersed herself in the game.

“It was tough to see our kids going through the emotional rollercoaster, yet I didn’t understand why kids get on such rollercoaster,” she remembers. “So, I started playing adult tournaments and leagues matches so that I could get a better understanding of what happens before, during, and after the match.”

Tennis then became a shared experience for the Chung family, a topic of group discussion about how each approaches their match play and how they can improve and excel with each other’s help. Benny, at one time a high school competitor, adopted his role as the family “coach and equipment manager” to foster the tennis growth of the family.

“We have been watching our own progress,” she says of the family unit, “sharing emotions on good days and bad days, encouraging and supporting each other, improving together, even though the level of tennis is different from one another.  We go to watch their matches, they come to watch my matches. Sometimes we play a family tournament together.”

During Asian American Pacific Islander Heritage Month, celebrated annually in May, Risa (who is of Japanese descent) reflected on the impact that fellow Asian tennis players have on her and her family, especially those who’ve climbed the ladder and serve as the face of tennis at the pro level.

“When we watch pro tennis tournaments on TV,” Risa noted, “we often pay attention to Asian and Asian-American athletes like (former UCLA national champion) Mackie McDonald, Claire Liu, Ena Shibahara, and Naomi Osaka. One thing I highly appreciate is Ena and Naomi’s politeness on and off the court. They show appreciation and respect. Bowing after the match regardless of the result is one of them. It’s not just about the skills they’ve got, but also their attitudes that make them awesome!”

The Chung family is also well in tune with the recent uptick in animosity towards the Asian community, an alarming trend that spawned a national cry to #StopAsianHate. From the tennis court to the supermarket, subtle and not-so-subtle interactions have heightened a sense of anxiety and fear for Risa and her family.

“We must stay extra alert and carry constant anxiety everywhere we go,” she cautions, “worrying about what people around you would say to us, and whether or when we will be the next target.”

“A voice from one person may not be heard,” Risa believes, “but if we put our voices together, it may be heard and hopefully make a change.”