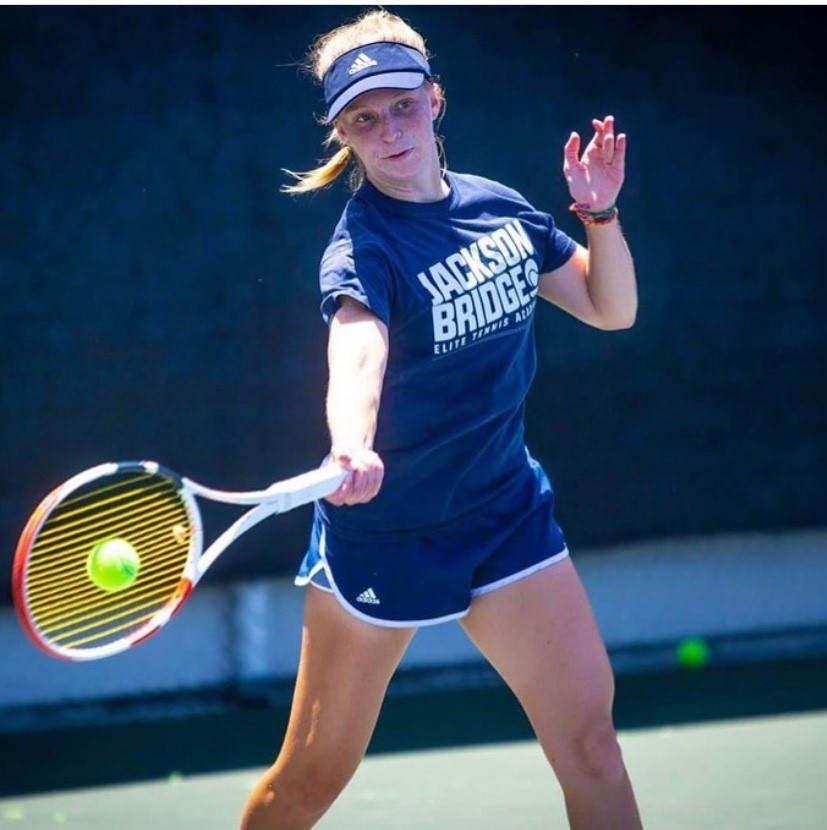 Eight years ago, budding soccer star Maxine Murphy suffered a dreadful snowboard accident that forever altered her young life. After months of grueling rehabilitation, the Laguna Niguel native defied the odds and returned to sports – but this time, tennis was her saving grace.

This Thanksgiving weekend will mark the anniversary of the incident, when then 9-year old Murphy suffered two broken vertebrae in her neck as the result of the horrific accident atop Mammoth Mountain. She was airlifted to a nearby hospital where her C4 and C6 vertebrae had to be fused together, and after months and months of rehab and physical therapy, Murphy was forced to spend most of the following year in a neck brace.

Her soccer dreams dashed, the ultra-competitive Murphy slowly turned her focus to tennis and at age 12, following a lesson with her current coach Kevin Jackson, she was hooked on the game for good.

“I used to play tennis just for fun once a week, but once the accident happened they told me no more contact sports,” said Murphy, one of Southern California’s top girls’ 18s player who reached the semifinals of the recent USTA Southern California Junior Sectional Championships, where she was the #2 seed.

Shelly Murphy knew it would be tough for her daughter to give up soccer and had another sport in mind for Maxine. “I wanted her to play chess,” she quipped.

But tennis was her destiny and Shelly said it has been Jackson who has continued to inspire her daughter to reach new heights in the sport first at Nellie Gail Ranch Tennis Club in Laguna Hills and then north to Fountain Valley where Jackson opened the Jackson Bridge Academy at Los Caballeros Racquet and Sports Club.

“One door closes and another one opens,” said Maxine, who finished the 2019 season ranked No. 1 in doubles in the section. “I don’t know where I’d be without tennis. It’s weird to say, but the accident led me to something that would change my life. I wouldn’t be here without it.”

And the “here” Maxine is referring to is a recruited spot on the Washington State University women’s roster in 2021-22. As a 4.0 senior at online Cal Prep Academy, Murphy will enter college on an academic scholarship before moving over to an athletic one the following year.

Murphy mulled over school programs like Loyola Marymount and others before settling on life in Pullman following a visit to the college town. “I was looking for a school that balances academics and athletics,” she said. “I just loved the environment and atmosphere. The coaches are amazing and everything was just so positive. I loved everything they had to offer.”

Education has always been important to Murphy. “I’m going to study kinesiology and be a physical therapist after school,” Murphy said. “I’ve always been good in math and science and as an athlete I want to be able to help other athletes. It translates well.”

It has been eight years since Murphy’s life changed forever in the tragic accident on a ski slope. Murphy said she feels no affects and is 100 percent healed.

“It’s by the grace of God that she’s even alive,” said Shelly. “They say you lose slight mobility, about 10 percent, when you are fused. But she doesn’t even notice it. The outcome could have been so much worse. We are thankful she can play tennis every day and loves it.”

Said Maxine: “I do love everything about tennis. I’m a very competitive person and I love the fitness and training. But the matches are the most fun.”