Memorable sports moments in Los Angeles are like coins in a wishing well. Oh, so many of them.

Kirk Gibson hit that World Series home run. Rafer Johnson climbed that tiny ladder and lit the torch for the 1984 Olympics. Even before Wayne Gretzky came to town, there was a Miracle on Manchester. Magic, Kareem, Kobe and Shaq made downtown parades a community staple. And on a spectacular afternoon at a jam-packed Rose Bowl, Brandi Chastain tore off her soccer jersey seconds after winning a women’s world cup.

Then, there was Paul Annacone’s moment, less hoopla, but in the world of local tennis, no less stirring. Annacone, who has coached Pete Sampras and Roger Federer to 10 of their 34 Grand Slam titles, still lives among us in Woodland Hills, and is often seen as a commentator on the Tennis Channel.

It was late September, 1985, and the Volvo L.A. Open Tennis Tournament was doing its best to maintain the men’s tennis buzz from the U.S. Open a few weeks earlier in New York City. Ivan Lendl had beaten John McEnroe in the final. And McEnroe, with his home in Malibu and his new movie star girlfriend, Tatum O’Neal, was entered in LA.

That was a big deal. McEnroe didn’t invent tennis buzz, but he had taken it to new levels with his superb skills and cranky on-court antics. For promoter Jack Kramer, who had kept the tournament at UCLA alive and kicking–despite the size limits of the facility, bad dates and a mushrooming tour stop in Palm Springs in the spring that already seemed to be emerging as the main Southern California tennis event–McEnroe was the marquee attraction he needed. Kramer was respected and revered in the sport, but he was reaching the stage where he couldn’t sell enough tickets just because it was Jack Kramer asking.

This time, Kramer had what he wanted—a superstar in a Saturday night semifinal, McEnroe against a young prospect from New York by way of the University of Tennessee, Paul Annacone. Tickets were sold, easily. The regulars, like Johnny Carson and Dustin Hoffman, would likely be on hand. It would be Los Angeles at its finest, just like its image: movies stars watching a tennis star.

And then, about 5:30 that afternoon, the call came to Kramer from the house in Malibu. McEnroe had the flu. They sent a doctor, who confirmed the illness.

At 7 p.m., just before match time, Kramer took a microphone and addressed the crowd. There would be no semifinal. Annacone had won by default. There also would be no ticket refunds. The great and legendary Kramer was booed on the main court of the tournament he had built and nurtured for years. It was duly reported in all the papers that ticket prices were as high a $30.

Like any true promoter, Kramer had tried to come up with a substitute show. He had approached Annacone, who was already a notable doubles player on the tour—he had won the Australian doubles earlier that year–and tried to convince him to play a best-of-five sets doubles match in the Saturday night singles semifinal slot. Annacone feared fatigue and possible injury leading into the Sunday final and said no.

Los Angeles Times columnist Mike Downey captured the mood of the tennis fans that night when he wrote, prefacing his remarks by saying he had nothing against Annacone and that Annacone was a fine young player, but: “Getting Annacone instead of McEnroe in the final is sort of like going to a Jackson’s Concert and finding out Michael couldn’t make it.”

Stefan Edberg, the young Swede who had won an Olympic gold medal the year before in the tennis demonstration sport on the same UCLA center court, had done his part. He was in the final. He had already won a major, the Australian Open that year, and would win five more. But he wasn’t yet the draw of a McEnroe.

And Annacone was clearly the odd man out. 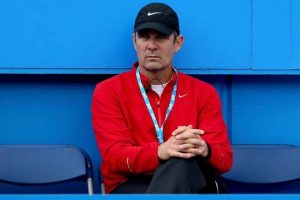 Just slightly fewer than 8,000 showed up for the Sunday final. Many of them still remember it to this day, because they were glued to their seats. The thought of McEnroe drifted away about midway through the first set.

The match went 2 hours 57 minutes. Annacone won, 7-6, 6-7, 7-6. Edberg’s style was to serve and volley and get to the net as quickly as he could. Anytime. Annacone’s was the same. There was very little of the baseline slugging of today. Annacone often even chipped his service returns back ,and charged the net immediately, something he taught Sampras and Federer to incorporate into their games in later years.

It was superb. It was exciting. It was thrill-a-minute tennis.

Julie Cart, The Times tennis writer at that time, captured it perfectly: “This match was better than two McEnroes,” she wrote. “It had graceful athleticism, mated with manic aggression.”

It also had a moment of wonderful, and rare, sportsmanship.

With Annacone serving at 5-5, 40-30 of the third set, Edberg flicked up a lob and Annacone hit a deep overhead that ticked the baseline. The lines person called it out. Edberg stopped, looked at the spot it hit, walked to the chair umpire and said the shot was good. Then he sat down, effectively giving the game and a 6-5 lead to Annecone.

Afterward, Edberg said, in his usual non-plussed manner: “It was in. What else was there to do?”

Recently, Annacone, nudged to recall the match, said, “It makes total sense that he would do that. That’s just the way he was, a total gentleman. I’d like to think I’d do the same thing.”

The LA title was Annacone’s first on the tour. He would win just two more, but would win 14 in doubles, most with South African Christo Van Rensburg, including that ’84 Australian. Annacone got as high as No. 12 in singles and No. 3 in doubles. Without a doubt, the LA singles title remains a defining moment for him.

“I had just lost to Mats Wilander at the U.S. Open,” Annacone says now, “and I was pretty down because I had a couple of great chances to go up, two sets to one, in that match. My brother, Steve, was my coach and was with me for seven years on the tour. The loss really knocked the wind out of my sails.

“And there I was, a few weeks later, sitting on a bench with a towel over my head, having just won the LA Open, and thinking, realizing, that anything can happen.

“It injected new belief in me in what I could do and how I would do it.”

Steve Annacone’s mandate has also carried over to his highly successful coaching career, where he talks about things such as finding ways for his students to avoid letting match pressure control them, letting “nerves suffocate your thought process.”

He says his two most famous students, Sampras and Federer, are as distinctive in personality as they are in their tennis games.

“I never met anybody who was as results-driven as Pete,” Annacone says. “Kind of like Michael Jordan or Kobe. And Pete could still deal with the pressures that came with that, the pressures of only making news if you lost.

“Nor have I met anybody quite like Roger. He loves the world. He loves to travel it with his family. He is open, interesting, interested.”

Annacone currently tutors young Taylor Fritz, who has made his way into the top 30 in the world, and whose mother, former top ten player Kathy May, took a long look at several coaches before deciding on Annacone.

What he does now, what he has achieved in the sport, may always have some roots in that LA Open victory in 1985, even to the point of experiencing the cliché of what goes around, comes around. In the 1986 U.S. Open, Paul Annacone stunned the tennis world by taking out John McEnroe, 1-6, 6-3, 6-3, 6-3.

In the first round.