You know who Laver is. His achievements include being the only tennis player to win his sport’s four major titles—the Australian Open, the French, Wimbledon and the U.S. Open in the same year–TWICE. He did it in 1962 as an amateur and in 1969 as a pro. That will be in the first paragraph of his obituary and maybe even on his headstone. 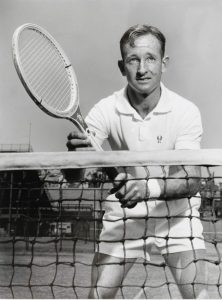 Besides this headline achievement, there is more. Much more.

–Laver won 11 majors and missed competing in 20 more during a five-year swing, his prime years in his 20s, when he turned pro and couldn’t compete against amateurs. In that time, he won eight professional majors, which puts his total championship achievements in top events at 19, or one fewer than the current record-holder, Roger Federer.

–He played in five Davis Cups for Australia, at a time when the Davis Cup was almost as big a deal as the majors. Australia won all five of those. Laver’s record in Davis Cup competition is 16-4 in singles, 4-0 in doubles.

–He won 200 singles titles in his career.

–He once made it to major tournament finals 14 consecutive times, a still unthinkable record in tennis.

–When the greatly deserved accolades came, they did so in droves. He went into the International Tennis Hall of Fame in 1981. They put his picture on an Australian stamp in 2003. They made him a Companion of the Order of Australia in 2016. That is like being knighted. The Southern California Tennis Assn. Hall of Fame inducted him in 2017.

–And now, when they play all the big matches at the Australian Open, they do so on the court named in honor of the “The Rocket” from Rockhampton, Australia, the 5-foot-8, left-handed tennis legend who, on the day in 2000 when they dedicated that court to him, listened to the ceremonies from his home in Carlsbad when a sportswriter called him and put the proceedings on speaker phone.

Why he wasn’t there in person says volumes about Laver, as does his friendship with the aforementioned Jay Paris.

Paris is a sportswriter (not the one who put Laver on the phone for his stadium-naming). He lives in San Diego’s North County, worked for years in the community news section of the Orange County Register and also at the North County Times. He is a good sportswriter, still does free-lance work with fine reporting that he weaves into nicely worded stories. But he is not famous, not Red Smith nor Jim Murray nor Frank Deford. There are no Pulitzer Prize plaques on Jay Paris’ mantle.

His best prize, besides his family and his health, is a friendship with Laver, who, unlike many in his strata of athletic achievement, would never seek friendship on the basis of parallel stature. Many star athletes twist themselves into pretzels trying to be regular guys or girls. Laver IS one.

Proof of that is easy, residing in a short sentence from Paris.

“He picked me up after my colonoscopy,” Paris says. 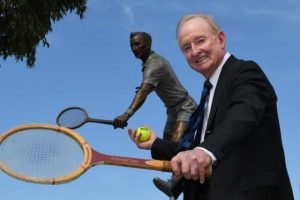 They met in 1987, when Paris was attempting to justify getting a press pass to Wimbledon by pursuing the ever-present need in small papers for a local angle. Laver lived in Carlsbad. Local enough, Paris thought. He got a phone number, called probably expecting a superstar brush off, and got instead, “Sure mate. Come on over.”

He went on over, again probably expecting the rehearsed platitudes of somebody who had been interviewed thousands of times.
“I had a lot of questions written down,” Paris says. “Pretty soon, I had been there about an hour and Rocket said, ‘Hey, Mate, your really did your research, but I have some place I have to go.’”

Paris wrote his story, Laver went on his way, and their next meeting was a few years later, in the parking lot of a Chargers game.

“I was there to cover the Chargers,” Paris says, “and I saw him at a motorhome kind of doing the cleanup stuff. I walked over and kidded him, something about how can you win two Grand Slams and still have to do the KP duty.

“He was a big Chargers fan and I offered him my press parking pass so he could get closer at the next game,” Paris says.

At that next game, the Rod Laver Tailgate Party began. The combination was a can’t-miss hit: Laver’s celebrity and Paris’ parking pass. That was the mid-1990s, and it became a big event at Chargers’ home games. Writers would come by, as well as friends and famous people.

“Lamar Hunt (the NFL team owner), came by one time,” Paris says, “and said he could only stay a minute and then we got him into the Chuckers game—it’s kind of like horseshoes or cornhole. An hour later, he was still there, playing.”

The friendship has endured, through some difficult times for Laver. He wasn’t on hand for that 2000 Laver Stadium dedication in Melbourne because his wife, Mary, was ill and Laver rarely left her side. She suffered from Peripheral Neuropathy, which kept her in pain much of her later years before her death in 2012. It took a while, even after Mary died, for Laver to move on. They had been married for 46 years.

The caretaking in the Laver family had not been one-sided. In July of 1998, while being interviewed by ESPN at UCLA, Laver suffered a stroke that took him several years from which to completely recover. Mary seldom left his side, both in the hospital and at home, during that recovery.

When he was able to move on after Mary’s death, they were waiting in line all over the world, to honor him. He may still have not wanted to get out, but he finally did.

“I kidded him about being gone so much this year,” Paris says. “He laughed and said he probably hadn’t traveled this much when he was playing.”

He is welcomed at all the majors, whenever he wants to go. And when he does, he is treated like royalty, especially by the likes of Roger Federer and Rafael Nadal, two of the current superstars of the sport. Laver attends, smiles, shakes hands and says nice things about everybody and everything. Paris watches and knows better than most what is really going on.

“The only time I see him be uncomfortable,” Paris says, “is when he is being saluted.”

Sometimes, it helps to have comfortable friends around. Several times, Laver has taken Paris to major tournaments.

“He took me to Wimbledon and we sat in the Royal box,” Paris says. “We sat behind Beckham and we got to meet royalty, we got to meet Kate.”
Back home, that undoubtedly triggered wonderfully sarcastic comments from those who knew Paris: Who was that old guy sitting in the Royal Box next to Jay Paris?

When he is not on a whirlwind tour of the tennis world, Laver is back home in Carlsbad, just being comfortable, just being Rocket Rod.

“He comes out every Sunday (when he is in town) for our senior softball league game at La Costa,” Paris says. “He doesn’t play, but he always comes. He wears his team jersey, No. 11 for his 11 Grand Slams. And he always goes 2 for 2—two beers and two plates of barbecue. He is our mascot.”

If fame might be a bit fleeting for Laver, now 81, it also can be a chuckle.

“He went to the doctor a while back,” Paris says, “and he had to sit around in the waiting people, like everybody else. It was May, the French Open was on the TV, and when the young doctor came out to get him, he noticed that Laver was watching tennis.”

According to Paris, this conversation ensued:

Doctor: “What’s that you’re watching?”
Laver: “The French Open.”
Doctor: “Do you know anything about that?”
Laver: “Yup. I won it twice.”