It was 49 years ago that Dave Reed met with the tennis committee of Pasadena’s Valley Hunt Club to tell them he wasn’t interested in the job of head pro.

“It was going to be a courtesy interview,” Reed says. “Long Ellis had called my dad and asked if I might be interested. I was a couple of years out of UCLA and I wanted to be a history professor. My dad knew that, so he said no. They asked if I might just come for an interview, just to learn more about the job. That seemed like a fair and reasonable thing to do.”

So, Reed, an exceptional tennis player from Glendale High School, who had won two CIF titles and lost just one match in his three years of varsity high school tennis–parlaying that into an All-American career at UCLA in the Arthur Ashe/Charlie Pasarell era—showed up for the interview.

It turns out Ellis, longtime SCTA board member and namesake of the SCTA’s annual collegiate achievement and sportsmanship award, had made a great call. Reed took the job and held it for 43 years, retiring in 2013, exactly 43 years to the day he began. 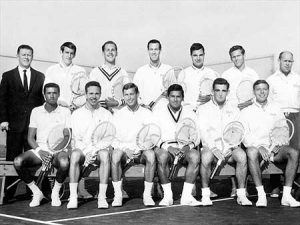 Reed had been mostly No. 3 at UCLA in the early ‘60s, and it wasn’t because his tennis skills lacked. It was because No. 1 was pretty much shared by Ashe and Pasarell. Ashe was the quick-as-lightning kid from Richmond, Va., who had started showing his potential in the juniors. Pasarell was the well-prepared, well-connected player from Puerto Rico (both his parents were island champions at one time or another), who also was making a name in the national junior events.

All three ended up at UCLA mostly because J.D. Morgan was the tennis coach. Actually, Morgan was much more than that. He was a legend, a bit of a curmudgeon, a story-teller, a father figure/grandfather figure wrapped in one, a gentle dictatorial presence and a great tennis strategist. Morgan took UCLA to eight NCAA tennis titles and was also UCLA’s athletic director from 1963-’79, during John Wooden’s run of ten NCAA basketball championships. Morgan passed away in 1980 at age 61, but the J.D. Morgan stories may never die.

“He was always in charge,” Reed says, “and if there was ever any question of that, he would remind you.

“Arthur and I roomed together and one day the phone rang down the hall and it was J.D. In the course of the conversation, I told him that Charlie Pasarell had mentioned he wanted to talk to him. J.D. replied, ’Wrong, Reed. You mean that I want to talk to Pasarell.’ ’’

Reed says that another time, he was playing in an event at Princeton and so he drove cross country with J.D., who didn’t fly.

“He drove everywhere,” Reed says, “and I mean, HE drove. We were on the road for 12 hours a day, probably for four or five days, and he never let me drive. He never let anybody drive.”

“I remember one time,” Reed says, “when we were talking about snakes and Allen Fox, another team member, said that the fastest snake in the world was the Sidewinder. ‘Wrong,’ said J.D. ‘The fastest snake in the work is the Australian Hoop Snake. It grabs its tail and rolls downhill, 15-20 miles an hour.’ That, of course, was baloney. But when J.D. said it, it had to be right.”

He was usually right about Bruin tennis strategy, too.

‘We’d practice, play lots of challenge matches,” Reed says, “but they never meant anything. J.D. knew the strategy, the matchups. Dennis Ralston was then the star at USC, and J.D. knew that Charlie had little chance to beat Ralston, but Arthur might. Ian Crookenden was on our team. He had played for New Zealand ‘s Davis Cup team before he even came to UCLA. Still, I don’t think I ever lost a set to him,
but many times, J.D. would play him ahead of me because of the matchup. And he was usually right.”

Both Ashe and Pasarell are now legendary figures in the sport of tennis. Reed feels blessed to have seen them and known them as their legends were beginning.

Ashe went on to win three major titles, failing only at the French Open. Pasarell not only had a solid pro career that included a then-record (pre-John Isner/Nicolas Mahut in 2010) Wimbledon match of 5 hours 20 minutes. But he also went on to hold positions of authority and influence in the international tennis hierarchy and started, with Ray Moore, the tournament that has become the BNP Paribas Open in Indian Wells, generally considered the fifth biggest tournament of the year.

“Charlie was always looked at as somebody special, almost considered like an aristocrat, like born with a silver spoon thing.” Reed says. “He came from a family of prominence in Puerto Rico, and when he was a junior, he was the best junior in the world. He got lessons from the famous Welby Van Horne (a U.S. Open finalist). You knew he was something special, but when you got to know him, he was just regular folk. And he had a heart of gold. Still does, from what I hear.”

“I was closer to Arthur because I roomed with him twice. I never lost to Arthur before I turned 19, and I never beat him after I turned 19. I always thought he won a lot of matches despite himself. In those days, he lacked confidence, but he was so good he still won most of the time.”

Ashe was the first, and still the only, black player to win Australian, Wimbledon and U.S. Open men’s singles titles. But according to Reed, race and its accompanying issues were not something Ashe embraced at a college student age.

“We had plenty of talks about race,” Reed says, “but Arthur was just a kid then. We all thought of him as bright and scholarly, but he was also unsophisticated. He just didn’t want to be taken advantage of. In many ways, he had a charmed life. At UCLA, he was very well liked, regarded as somebody special. And he deserved that.

“He was never comfortable with being a black crusader. He never wanted to be a firebrand. He wanted to help affect change through a system. One time, a black activist group–I think it was led by H. Rap Brown—wanted Arthur to participate in some event. J.D. came to him, and knowing he was uncomfortable with these things, explained to Arthur that he was more an intellectual, that this wasn’t his way. He didn’t participate.”

Ashe died in 1993 at age 49. He had had a bad heart, and during a heart bypass operation, he had a blood transfusion that infected him with the HIV virus, which eventually killed him.

“When he died,” Reed says, “I felt shock, but mostly sadness. I had seen him at UCLA. He was being honored at an event after J.D. died. By then, he was fighting his heart issues. We were at dinner and he was eating salad and healthy stuff. This is a guy who never passed up a cheeseburger.

“That is the last time I saw him.

“And I haven’t seen Charlie since the 1984 Olympics. I’ve been out to Indian Wells, to his tournament. Never asked him for tickets. Just went on my own.

“As a team, we never had any kind of gathering after Arthur died. I regret that.”

Somebody can tape it and make a movie.