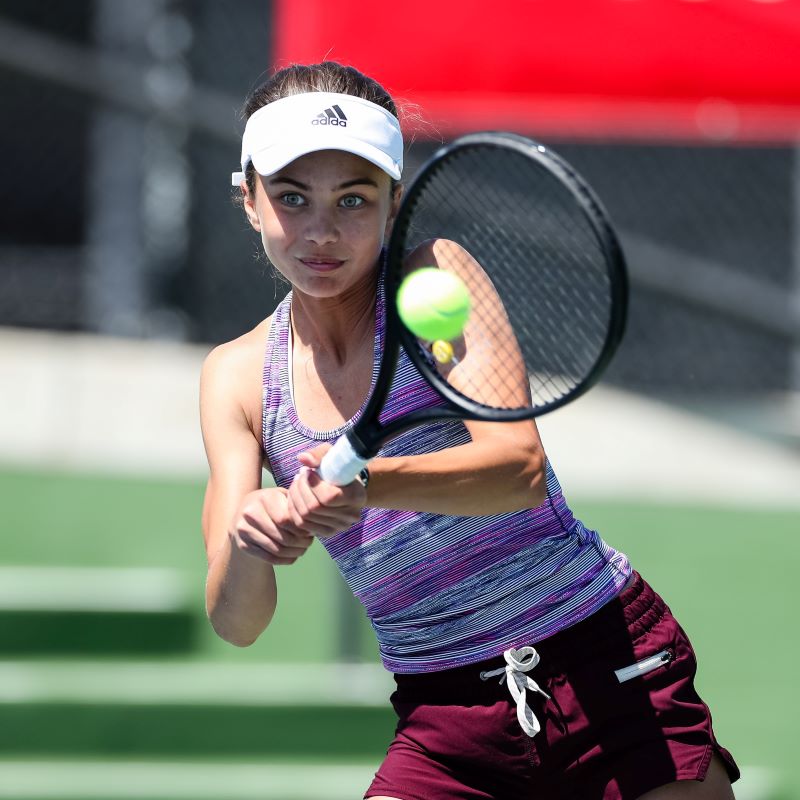 “I think I did a good job of stepping into the court and not letting her push me back and being aggressive,” Jovic said. “We’ve played once before and she won in a third-set tiebreaker. So, I knew how she was going to play. I think it’s kind of cool that it was a SoCal final.”

She added: “It was kind of nice being the underdog, and not expecting to win. I really didn’t look at the draw much.”

Jovic is coached by former USC men’s coach Peter Smith at the Jack Kramer Club in Rolling Hills Estates, as well as working with Rylan Rizza.

“I had a good game plan coming,” Woestendick said. “He’s a very interesting and crafty player. I saw that yesterday and played really well in the second set and that kind of caught me off guard.”

Woestendick said his game plan was to go backhand to backhand and wait for a short ball to come in behind. “Just focus on taking it one point at a time,” he said. “

Woestendick went up an early break in the third set. “That was pretty big, going up 3-0, 4-1. That was big. Especially when it gets tight.”

After the match, Bielen said his tennis dream in life is to win the most Wimbledon titles. “I love Wimbledon,” he said. “I’m going to keep training really hard and keep listening to my mom and dad.

“I would like to thank my mom and dad since my dad is my fitness coach and my mom is my coach at Robbie Wagner’s club,” said Bielen, who was born in Queens, very near the site of the US Open.

“Of course I was nervous,” said Basamakov, who trains at the Westlake Athletic Club with coach Louis Lam and at Cal Lutheran with Jerry Yu. “I’m really frustrated because the match was a lot closer than the score. I was battling the wind a little bit out there.”

Bielen said after his semifinal win, he went back to his hotel and visualized winning the Easter Bowl. “And I did it,” he said. “It feels really good.”

“I’ve heard a lot about the Easter Bowl from my friends, so I was pretty excited to play here,” Lam said. “In the beginning I was a little shaky because I was tight being the final and all. I felt pressure in my first match, but it started to fade away as I got more into the tournament.”

“I played my best, and came up short,” Frodin said. “I had a good tournament and I’m really going to learn from this experience.”