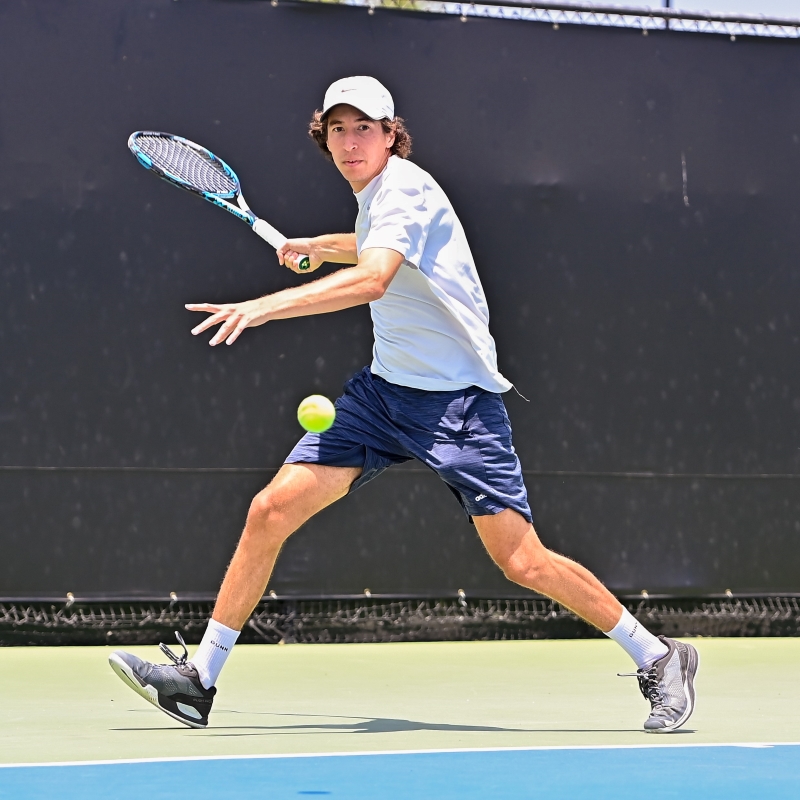 His father and coach no longer by his side, Isaiah Strode knows there will be times this week during play at the 134th Annual Southern California Open Section Championships that he will look to the sidelines in hopes of seeing that familiar figure always shouting an encouraging and supportive word.

Morris “Skip” Strode passed away in May after a more than two-year battle with prostate cancer at the age of 62.

The oldest sibling of six and 23-year-old Isaiah is the top-seeded player and a former Open Sectional singles winner. He knows he must continue on without the man responsible for where he is at today.

“He taught me everything I know,” said El Cajon’s Isaiah, who beat Irvine’s Rithvik Krishna in straight sets during the first round on Wednesday in the $20,000 event at Barnes Tennis Center in San Diego. “I am the player I am today because of my dad.”

Isaiah said it’s been tough to get back on the court, but has played a few UTR events, but not as many matches as he would like after suffering a minor back injury recently. “I mean, I think I’ve been remembering him more on the court and remembering all the things he taught me when I was young,” he said. “I’m realizing how important those things are to me now more than ever. At times I took it for granted. Now, I feel like I’m able to remember him more, and in a positive way.”

Skip Strode and his family were fixtures for years at Morley Field Balboa Tennis Club in San Diego in the middle 1970s. As a pro himself, Skip broke the world’s top 100 and made top 50 in doubles playing with his brother Buzz Strode.

“Emotionally it’s been very difficult for me and my family,” Isaiah said. “My mom has taken most of it on with the other kids, but we’ve had amazing support of so many family and friends.”

This is Strode’s fourth year on tour having passed over a full-ride scholarship at the University of Alabama, instead choosing to go pro at age 19.

“I definitely had some offers,” Strode said. “I don’t know, I’m OK the way things turned out the way they did. I feel like I learned a lot of things I wouldn’t have if I would have went to college, but I’m pretty happy with where I’m at now. I know that the route that I chose has shaped me into the player I am today.”

Strode is happy to have a home tournament this week as he lives just 10 minutes from Barnes TC and hits there often at the facility run by his friend Barnes’ CEO Ryan Redondo.

In the fall of 2019, Strode took part in a unique week-long training program in San Diego for young area pros hosted by all-time great Jimmy Connors.

“I think spending that time with Jimmy and just picking his brain and seeing how he thinks as a champion, it was great for me,” Strode said. “He just has a great insight for the game, and he just thinks very simple on the court. I feel like that helped me collect my thoughts more and not to be all over the place. Just to keep my head straight out there and not be distracted. Matches are pretty simple at the end of the day and it’s how you execute. It’s pretty straight forward if you don’t over-complicate things. I tend to be analytical and over-analyze things.”

“Those guys have all done really well and I’m just happy for all their success,” Strode said, adding, “I feel like I’m in the right space to make a breakthrough like them.”

Strode said his faith has eased his heartache over losing his father. “I’m comforted knowing he’s in a better place and no longer in pain,” said Strode, who has posted Bible scriptures on his Instagram in the past. “My beliefs are important to me, and it shapes my whole life.”