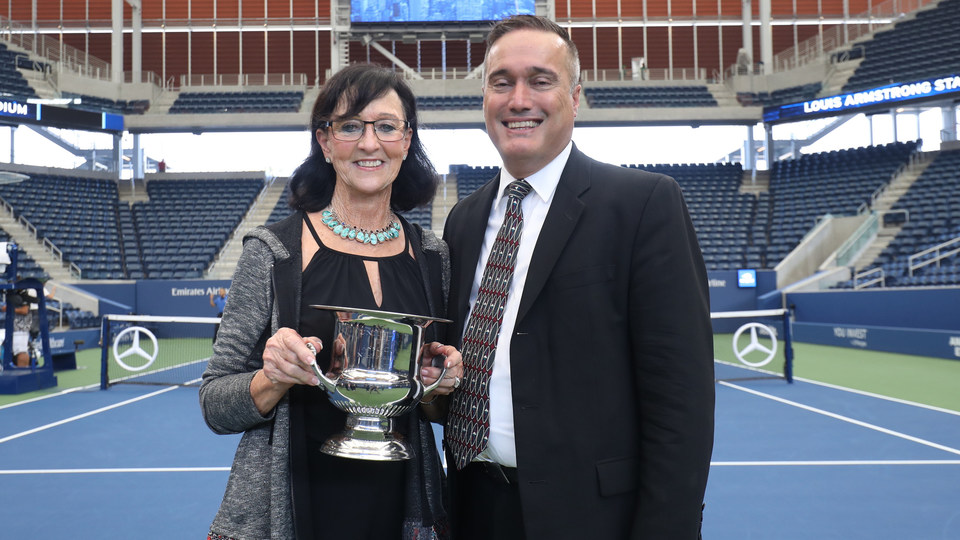 After a life completely immersed in the world of tennis since 1947, Fullerton’s Bonnie Hartshorn is hanging up her scoresheet. Born in Texas to a father that played tennis at Trinity College in San Antonio, Bonnie found tennis early – she learned to walk by pulling herself up on a net as a toddler. Her family moved around a lot in Texas before eventually settling in Fullerton when she was thirteen, a move precipitated by Bonnie’s love of tennis and the great opportunities present in Southern California.

At the time she moved to Fullerton, Bonnie was already the number one ranked junior in all the age divisions in Texas. The challenge of competing in California called to her, and she quickly made progress on the local and national levels. Bonnie was a member of the Fullerton Junior Tennis club, and alongside her father she traveled across the country playing in numerous national tournaments. In 1968, Bonnie became the first tennis pro at the Yorba Linda Country Club, where she built the tennis program from scratch over five decades.

Bonnie’s success in tennis was such that she was invited to join the Women’s Professional tour with Billie Jean King and several others, however Bonnie declined, with her focus being on putting her family first. Bonnie’s two sons, Chris and Ryan, also played tennis competitively including for four years at the high school level. Bonnie was even a volunteer coach at her children’s high school and eventually ended up as the coach for both the boys and girls teams for ten years. Bonnie worked her way to becoming a certified tennis official in the 1990s and worked USTA Junior events, ITA events, and Professional events, refereeing numerous events across Southern California over the years.

Bonnie was a renowned official and at the US Open in 2018, she was presented with the Nicholas E. Powell Umpire Award for her work. After an incredulously long and impactful career in tennis, Bonnie will be retiring after officiating the Big West Conference Championships in San Diego, capping off her love story with tennis with yet another meaningful contribution.

At this moment Bonnie has five grandchildren, and with a professional career in tennis in her rear view mirror, she is focused on her love of family over anything else.

David Nowick contributed to this story.