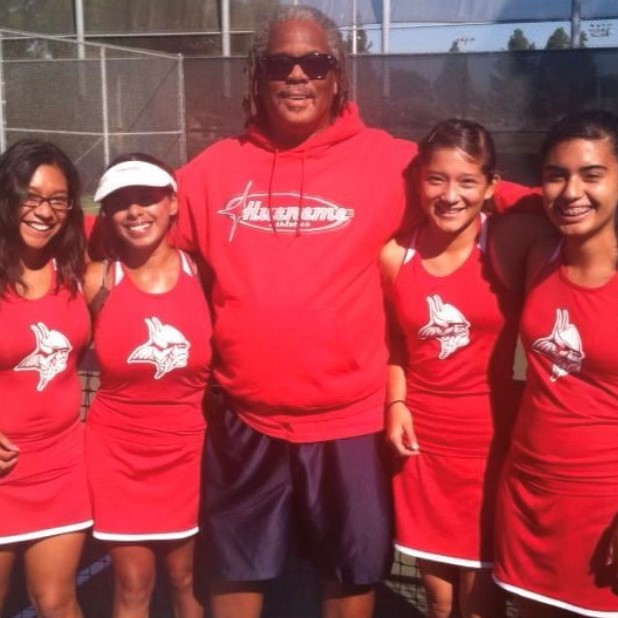 Growing up as a baseball player in Birmingham, Ala., young Walter Moody idolized the “Say Hey Kid” Willie Mays, and even got to meet his hero once at old Candlestick Park and had his program signed by the all-time great, who was a close friend of Moody’s uncle.

The 63-year-old Moody – who in 1972 played in the Senior Little League World Series in Gary, Ind., losing in the championship game to a team from Taiwan – wanted nothing more than to be like Mays and maybe play in the Big Leagues someday.

That is until shortly after graduating from Hueneme High in the summer of 1975 when Moody came home from a baseball game and watched as Arthur Ashe beat Jimmy Connors to become the first African American man to win Wimbledon.

“So I went out just kind of messed around with it,” Moody said of his introduction to tennis. “That match had a lasting effect on me and why I took up tennis. I saw Arthur’s success and how he carried himself. And I wanted to emulate that.”

Moody has taught English at his alma mater Hueneme High for the past 22 years and also serves as school’s boys’ and girls’ tennis coach. For years, Moody has introduced kids to the game of tennis through NJTL programming at Moranda Park Tennis Complex.

“We’re on the south side of Oxnard, and it’s not a hotbed for tennis,” Moody said. “There are a lot of soccer players and cross-country runners. A lot of people have established roots here from generations and sometimes they want to do something different. I get them in my classes and can recruit some of them to give tennis a try.”

Moody’s girls’ team has made the CIF-Southern Section playoffs the last six years and had a core group a few years back that got out of the second round.

“We had a few players play for Division II Heidelberg University in Ohio,” Moody said. “They were able to get their degrees and they got to travel and see the world. One did a semester in Mallorca, Spain. We’ve been fairly successful. We can’t always compete against the top schools.”

Moody encourages his top players to continue playing college tennis at Ventura College for Moody’s friend and longtime coach Nelson Emery. “Some just don’t see it,” he said. “I try to get them to play and a lot of them are good athletes. I tell them they can get two years in toward their degree.”

Moody took the unconventional route toward earning his degree, first deciding to teach tennis around the world at places like the Port Washington Tennis Academy in New York, in Germany and in Mexico.

“My racquet showed me the world,” said Moody, who earned his bachelor’s degree from Cal-State Northridge and his Masters from Grand Canyon University all while teaching tennis at Moranda Park.

Because he picked up tennis so late in life as an older teenager after being inspired by Ashe, reaching the top 10 was never the goal for Moody as a player. “My dream was to coach a top 10 player in the world, and it never happened,” he said. “I’m working with a 6-year-old now in the NJTL program. I still enjoy it and I get excited every time I’m on the court.”

Tennis has always been stereotyped as a rich, country club sport, but Moody has always tried to break down barriers and make the sport accessible to everyone. For years, his appearance has always been laid-back, and he’s worn long Bob Marley-like dreadlocks.

“I went into a 7-11 for a bottle of water and the guy behind the counter says, ‘What’s up, blood?’ And I said, ‘Yeah, you got it.’ And then a white guy walks in behind me and the guys says, ‘How you doing, sir?’ I tell this story to my students and I remember it like it was yesterday. I wonder why I can’t be sir?”

Moody has his own podcast and is writing his second book titled: “More Than Just a Tennis Coach.” He credits people like Terry Lynch of the Ventura County Junior Tennis Association will always being so supportive of him.

“I want to keep giving back to the game,” Moody said. “That’s the proudest thing on my ledger is that I’m a productive member of society. To have people like Terry comp my kids into events when they couldn’t afford it, just amazes me. She has given my kids a chance to see the other side.

Moody loves to say his racquet has shown him the world, and he keeps passing that saying on to his young players.

“To have a girl who just lived down the street, and in the hood go and visit Mallorca and get to see Paris and get to see London,” he said. “That’s just gives me such a thrill.”