In College Tennis, Seniors Lament What Might Have Been 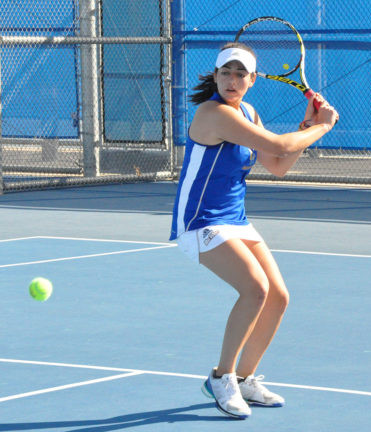 The Highlanders needed a win. Badly.

The women’s squad at UC Riverside had lost five decisions in a row and dropped to 3-8 overall on the 2019-20 tennis season, with Youngstown State University in town to face off at UCR’s Student Recreation Center. The team looked to their three seniors to guide the Highlanders back to the win column. Among them, Sara Khattab was gearing up for her second line doubles match alongside teammate Tia Elpusan, a junior at UCR and Khattab’s former classmate at Palos Verdes Peninsula High School.

That same day in Irvine, UCSD welcomed Ball State to La Jolla. The Tritons had catapulted themselves up the rankings with a flair for the dramatic. At 9-2 and ranked #7, the Men’s team had won five matches under ‘must-win’ conditions in a deciding singles match, and six of seven matches leading into the day’s showdown with Ball State. The momentum was due in part to senior Sreeganesh Manoharan, who was 9-1 in singles to date, plus six wins in the top doubles slot.

Khattab and Manoharan, two talented student-athletes from Southern California, were enjoying the limelight of their college experience, and in all likelihood, the grand finale of their tennis careers.

“I grew up playing at the Jack Kramer Club,” recalls Sara Khattab, who was introduced to tennis around age six alongside her father and siblings. “My first coach was Cecilia Parker, who happened to be the mother of my best friend. Because of this, I got to play every day with my best friend. I think this is what got me hooked on the sport.” 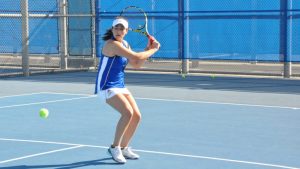 Khattab continued to develop her game under South Bay coach George Sulc, who taught the importance of work ethic. Later, she played at Dent Tennis Academy in Fountain Valley before competing at powerhouse Peninsula High School.

“One of the best things I got out of tennis was playing for my high school,” she remembers. “We won CIF Division I Championships and the State Regional Championships three out of my four years there.” Along the way, Khattab twice won CIF Individual titles in doubles competition, first with Risa Nakagawa in 2014 and then with Elpusan the following year.

In 2016, the high school MVP and varsity team captain committed to play at the University of California Riverside, beginning a four-year journey as a member of the Highlanders women’s tennis squad.

Like Khattab, Sreeganesh Manoharan got his first racquet from his dad, as a five-year old in Culver City. Soon after, the family moved to San Diego. “I knew San Diego was one of the best places to be for tennis,” Manoharan says. “The level of play here was insane and I made the most of it. I’ve been playing pretty competitively since I moved to San Diego. So, since I was 8 years old.”

With ample opportunity to play and develop in San Diego, Manoharan trained throughout the region at venues like Surf n’ Turf Tennis Club in Del Mar and Bobby Riggs Tennis Club in Encinitas. At Torrey Pines High School, he was a three-year team captain on a dynamic Falcons team that won the three CIF San Diego titles, a state title, and two national championships during his tenure.

While training with coach and former ATP pro Woody Blocher, Manoharan came to the realization that tennis would play a large role in his college experience, and in 2016 the four-star recruit signed with the Tritons of La Jolla.

“I got to meet most of the team on my first visit to UCR,” Khattab recalls, “and I could tell it was a group of girls who were genuinely more than just teammates. When I came to UCR, it was easy to become part of the family that was already established.”

Head coach Mark Henry and the Highlanders were surely glad to have Khattab on board. The freshman played a hefty schedule in her first year, starting her very first college match at #1 singles and competing in twenty singles matches (plus twenty doubles) throughout the year. As a freshman, her team posted five wins overall – the most since 2011. A year later, the Highlanders garnered six wins overall. Last year, seven wins.

Sitting at 3-8 in her final year, Khattab and her new family had a chance to continue the program’s ascent. With a full slate of matches still to come, at least five victories in the final nine would ensure eight total wins on the season and another step forward for UCR women’s tennis. 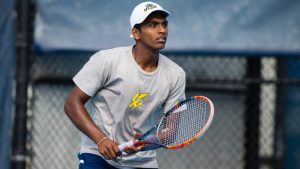 In San Diego, the Tritons hovered around .500 most of the past three years since Sreeganesh Manoharan had arrived, one of three freshmen on a team that earned 11 wins in 2016.

“From the moment I met the team, I instantly clicked,” Manoharan says. “I felt wanted here… The guys were very supportive throughout my last year of high school and through the four years in college and I wouldn’t have done it without them.”

There were early strokes of brilliance from the freshman, among them a big doubles upset of top-ranked Hawai’i Pacific with teammate Edvin Larsson. Paired with fellow sophomore Mark Isaia, Manoharan picked up eight doubles wins in the #1 position in 2017. As a junior he peaked at #9 in the ITA/Oracle West doubles rankings with teammate Neil Tengbumroong.

“The thing that makes UCSD such a great environment is that everyone treats you as a teammate regardless of the sport you play,” Manoharan says. “It’s that sense of unity that I feel really brought me to choose UCSD.”

Heading onto the court opposite Ball State with a 9-2 season record, the sense in La Jolla was that this would be a transcendent year for men’s tennis. Manoharan had been nearly unbeatable. Senior year was going to be one hell of a ride.

Ironically, the first major sporting event to be canceled was a pro tennis championship not terribly far from where Sara Khattab and the Highlanders were seeking their fourth win of the year. When organizers brought the BNP Paribas Open to a halt just hours before first serve, a domino effect began. Soon other high-profile events were delayed, postponed, and canceled. College and professional sports considered playing without spectators. Within hours, the world began to change. The COVID-19 virus was a global pandemic. In its far-reaching wake, the sports world stopped. University academics turned to online instruction. College sports… were over.

“I think the news was hardest to swallow for us seniors” says Khattab of herself and teammates Lauren Wolfe and Nicole Hitomi. “We had been looking forward to many ‘last’ events including the Big West Tournament at Indian Wells, senior day, and even just playing out our final competitive tennis match.”

“Our team was definitely silent for a few hours,” Manoharan recalls of when the Tritons learned their season had been cut short. “It was like we didn’t see it coming at the moment. The day before we played our match, we (were) smiling and enjoying the team culture and then next thing you know, our season was done. No practice, no weights, no matches, no get-togethers and most importantly, there were no goodbyes.” 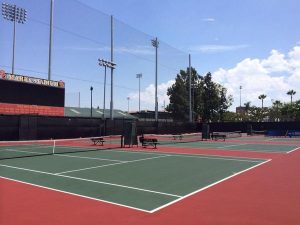 The college tennis community felt repercussions throughout.  At the University of Southern California, Daniel Cukierman opened the year as the nation’s top singles player on a team that included senior Brandon Holt, son of tennis legend Tracy Austin. At Pepperdine, Ashley Lahey embarked on her final year as one of the country’s emerging young stars, posting a 26-1 record since September. On Senior Day, UCLA would have celebrated Jada Hart, the team’s only senior, after an illustrious collegiate career with the Bruins.

For each of these stories, there are a dozen more.

Things could always be worse, and the cancellation of a sports season pales in comparison to the serious nature of a worldwide pandemic. Still, each of these athletes dedicated countless hours to their craft, not just over four years in a college program, but since those early days playing tennis with Dad, when the racquet was heavy and the ball sprayed every which way.

“I was sad, disappointed, and frustrated,” Manoharan remembers, “but I took a step back from the ‘chaos’ and realized that this was the right decision for the athletes and everyone else who may be affected by this decision. This journey has come to an end in the most unfortunate way but I made the most out of my time here and I’ll forever be grateful for that.”

Manoharan will apply to medical school throughout a gap year, when he plans to conduct clinical research on the effects of sleep apnea. He will also engage in EMT training, “so I can work in the same high pressure/stress environment athletics has trained me perfectly for,” he says.

“My first emotional moment (after the season was canceled) came when I saw a picture of my doubles partner (Tia Elpusan) and I playing together,” Khattab laments. “We have played doubles together for four years and I realized that we would probably never play a competitive match together again.”

Khattab anticipates graduate school as her next endeavor, seeking PhD programs in Mathematical Biology. Given the opportunity, she’d return to UCR for her grad work and lend any spare time to helping the tennis team in some form.

“As the end of our season was approaching, I was, in a way, prepared for the end of my tennis career,” she says. “However, I was definitely not ready for it to end this abruptly.”

Sara Khattab and Tia Elpusan joined their Highlander teammates in sweeping doubles competition opposite Youngstown State. The three UCR teams dominated by dropping merely five games in total, setting the table for a 5-2 team win and their fourth victory on the season against eight losses. Whether they’d have reached eight wins will remain unknown, but the progress fostered since Khattab’s arrival does not go unnoticed.

Sreeganesh Manoharan and the Tritons were unable to solve Ball State, dropping to 9-3 ahead of a season finale loss to Concordia University Irvine. Now after reaching their highest ITA ranking in over a decade, the team will build on a promising season in the Fall of 2020. They also embark on a four-year transition to the Big West Conference and Division I tennis.

Together, the two athletes join an illustrious and proud roster of college tennis alumni in Southern California. They will forever be Highlanders and Tritons. But that final season – senior year, the one with the asterisk – will always be remembered as what might have been.