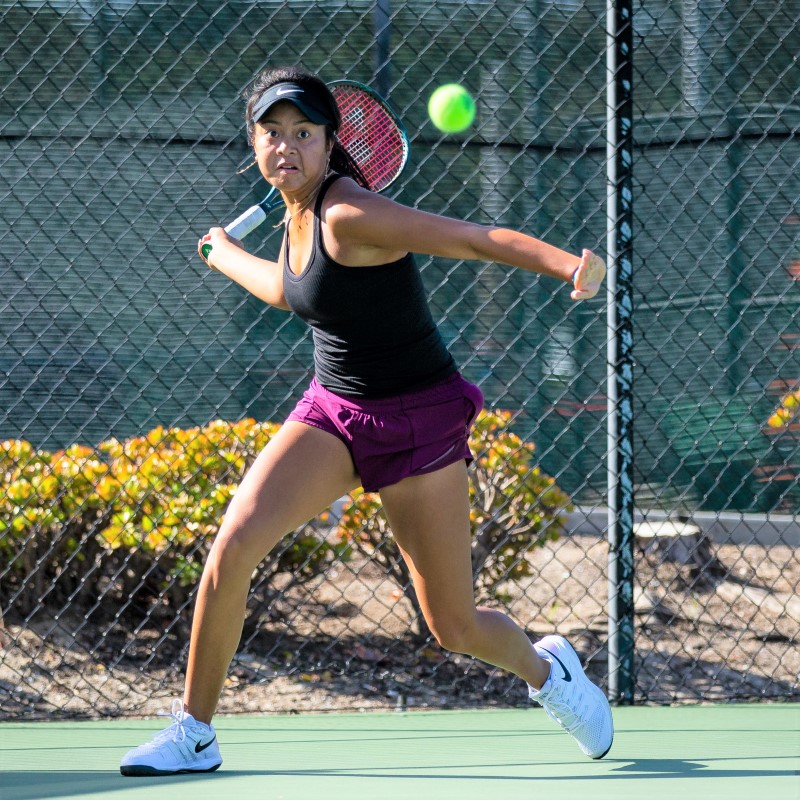 Sixteen-year-old Isabella Chhiv of Irvine took out Emma Sun, 6-4, 6-3, with the match ending a little quicker than the last time the two played.

“It was a Level 3 in Palm Springs and it went three sets and lasted like three and a half hours,” Chhiv said. “Today was one of my better days. Emma is so smart and plays really aggressive. It’s pretty funny that I had to play her. Of all the players here from all over the world, and I draw her. It’s just the luck of the draw.”

“We hit occasionally,” Chhiv said of Liu, the former Easter Bowl champion who in 2016 lost in the ISC Carson final to Kayla Day. “Once you get to know her, she’s so funny. She’s really amazing.”

Chhiv said she tries to pattern her game after Liu. “There are not a lot of girls who like to come to the net these days or have the variety in their shots like the drop shot and slice,” she said. “I do a lot of things like Claire and it’s important for me to keep developing my all-around game. A lot of these girls are so great from the baseline, but you have to be able to have different looks and styles.”

Chhiv next faces No. 10-seeded Reese Brantmeier, who is ranked just inside the top 90 in the ITF world junior rankings.

High school teammates at Peninsula High School in Rolling Hills Estates both moved on to the second round as Kimmi Hance and Madeleine Jessup posted impressive wins on Monday.

Jessup is coached by her father Michael Jessup, the former No. 1 player at Pepperdine University who splits time between the South Bay and his junior academy in Palo Alto, Calif., where he coaches Madeline’s younger brother.

Playing in the IOSC for the first time, Jessup recently returned from South America where she played ITF events, and currently ranks No. 246 in the ITF world rankings. Jessup moves on to next face No. 8-seeded Chelsea Fontenel in the second round.

“The tiebreakers can go either way,” said Gonzalez, 17. “I try to divide them into two going first to five, and then first to five again.”

Tecate is a town just over the U.S. border east of Tijuana with a population of just over 70,000 residents and best known for its beer.

There is one small public tennis facility in Tecate with two hard and two clay courts that were built with the help of teaching pro Eduardo Sanchez of Rancho Valencia Resort & Spa in nearby Rancho Santa Fe. Sanchez grew up in Tecate.

“I train in Tecate and in Chula Vista,” Gonzalez said. “You can say I’m a product of the courts that Eduardo helped build in Tecate.”