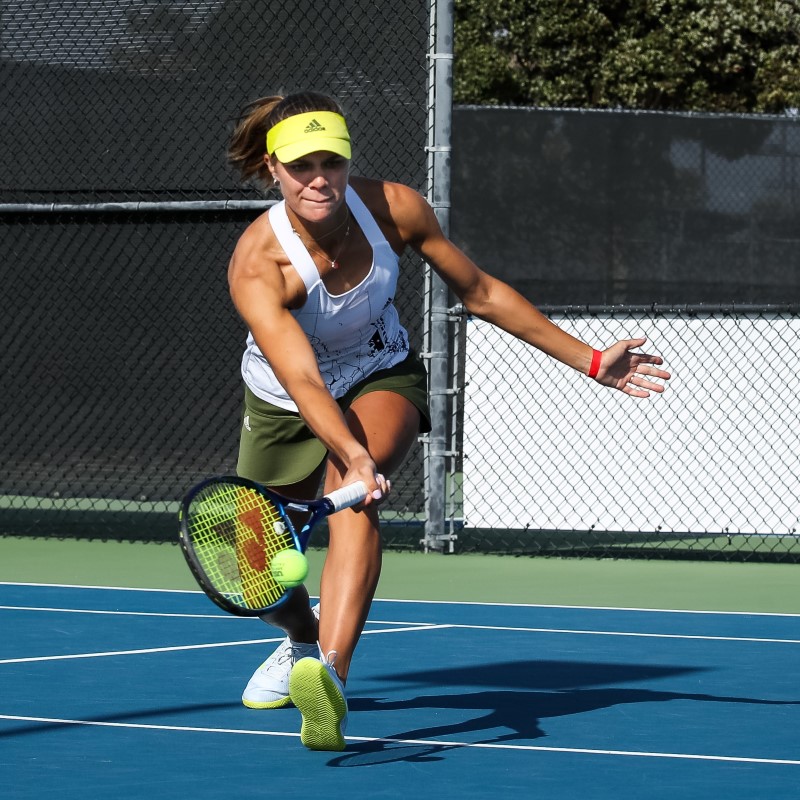 SAN DIEGO – Alexandra Yepifanova seemed unstoppable in her third round match yesterday, and on Thursday the pending challenge of young Clervie Ngounoue made for an intriguing quarterfinal at the IOSC in San Diego. But the future Cardinal proved too strong, as evident by a booming high percentage first serve that kept Ngounoue on her toes most of the match. Yepifanova advanced to Friday’s semis, 6-2, 6-3.

The nation’s top blue chip recruit, Yepifanova made headlines in 2019 as the first qualifier to reach the final of the Girls’ US Open and in the fall will head to Stanford with an interest in economics and computer science.

“I’m really excited about Stanford,” she said. “I talked to a lot of schools, USC, UVA, Duke. Overall, I thought Stanford is the best for me. Of course, the academics are rigorous, but I really want to focus on the pro tour after two years.”

For the first time this week, Boys top seed Bruno Kuzuhara needed to muster a little extra to erase a one set deficit opposite #7 Victor Lilov. Playing in windy conditions, Kuzuhara worked overtime to answer Lilov’s power game, eventually emerging with a 3-6, 7-6(4), 6-4 win to advance into the semifinals.

“I knew going into the match that I would have to move a lot,” Kuzuhara said afterwards. “I practice with Victor a lot, and we both know each other very well. I think the wind was the biggest (factor). Most of my mistakes, the wind would just pull it wide, so I tried to make that adjustment.”

While the hard work continues to benefit Kuzuhara, there’s plenty more ahead. Following the outcome of the IOSC, he remains in San Diego for the Easter Bowl competition. It’s a lot of tennis – singles and doubles – for the Floridian.

“The biggest priority is focusing on this tournament, and just taking care of the body after matches,” he said. “As the matches go on, fatigue can accumulate, so I just try to combat that with good recoveries.”

Kimmi Hance and Sebastian Gorzny, both products of Southern California, will play in Friday’s doubles finals. Dodging raindrops, Gorzny and teammate Nathan Cox advanced over Banerjee/Kittay in straight sets on stadium court, while next door, Hance & Brandmeier eliminated Hamner/Krueger in their semifinal.

Hance, of Torrance, competed earlier in the week in singles, but her exceptional play with former USTA Girls Nationals 16s champion Brantmeier has rekinkled her hopes for an ITF title in San Diego.

“Obviously after losing singles, I was a little down in the dumps,” Hance said. “But I’m realy good friends with my doubles partner, and we just go out there and have a good time and try to play good doubles. I think it’s really important to get my energy back up and feel a little bit better.”

Hance will join the UCLA Bruins this fall, something she’s very much looking forward to.

“I am so excited,” she said. “I literally can’t wait. I’m counting down the days I just knew it was where I was supposed to be.”

Hance lives nearby the UCLA campus, allowing her to work closely with her coaches and enjoy the familiarity and comforts of staying close to home. She’ll also gain a legendary new coach in Stella Sampras-Webster.

“I’ve known Stella for a long time and I feel very comfortable with her,” Hance said. “I’m really excited to be part of the Bruin family.”