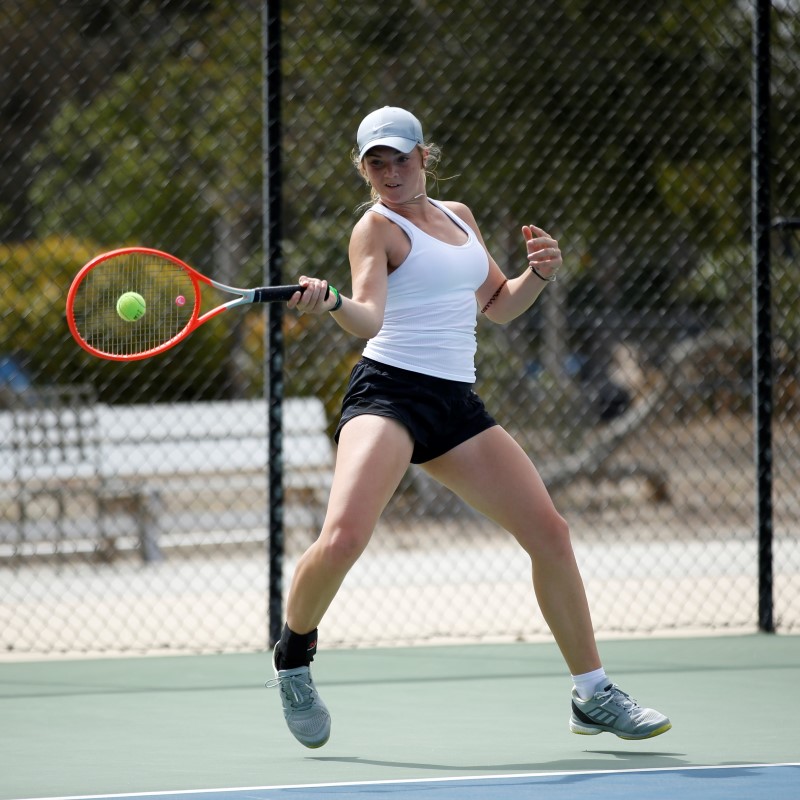 SAN DIEGO – Top-seeded in the girls’ singles of qualifying, Gracie Epps recorded two victories on Saturday, including a tough three-set nightcap win over Laguna Niguel’s Maxine Murphy. But before she walked onto the court at Barnes Tennis Center, Epps had a little shopping to do.

The 16-year-old from Oklahoma was wearing tennis shorts and a shirt she purchased upon arriving in San Diego. Epps was notified by American Airlines that her suitcase never made it on the flight, and instead ended up in Jamaica.

“I don’t check my tennis bag for that reason alone,” said Epps, who is home schooled and trains at the Tucker Tennis Academy. “It’s OK. Everything can be replaced, but it just makes it a little tougher when you have to deal with off-the-court things like that.”

Epps had spent the past two weeks in the Dominican Republic playing ITF J2-level tournaments traveling with her friend Sophie Williams from Florida. “It was a lot of fun, but the food was not good,” she said. “I was glad to get back to the States.”

A day after making it all the way to the final of the ITF J4 Las Vegas tournament, Sebastian Gornzy was back on the court and notched two impressive wins in qualifying at the IOSC.

Gornzy, who won seven straight matches before falling in the final Friday in Vegas, drove straight to San Diego from Nevada. He posted wins over Spencer Johnson (6-3, 6-2) and then blanked No. 9 seeded Brayden Michna without dropping a game.

Gornzy, who grew up in Fountain Valley and Irvine and played SoCal junior events before moving to Austin, Texas, with his mother in 2019, was watched by his father Ted Gornzy at Barnes.

“I’m a little tired and my legs are feeling it,” Gorzny said after the match. “I’m tired physically, but more mentally.”

Gorzny said he is currently training at the Evert Academy in Florida.

The younger brother of ATP player and 2018 ISC champion Brandon Nakashima reeled off two big wins on Saturday, including an upset over No. 2-seeded Zane Ford, 3-6, 6-1, 10-6.

Brandon Nakashima, who is ranked No. 145 on the ATP World Tour, is currently in Miami where he will take part in qualifying of his own at the upcoming Miami Open.

The daughter of hockey legend Wayne Gretzky fell in her first-round qualifying match against Lamija Avdic from Kirkland, Wash. The 17-year-old Emma Gretzky, who picked up tennis later than most of the players in the draw at the age of 12 and a half, is a senior at Oaks Christian in Westlake Village. She was granted a wild card into IOSC qualifying.