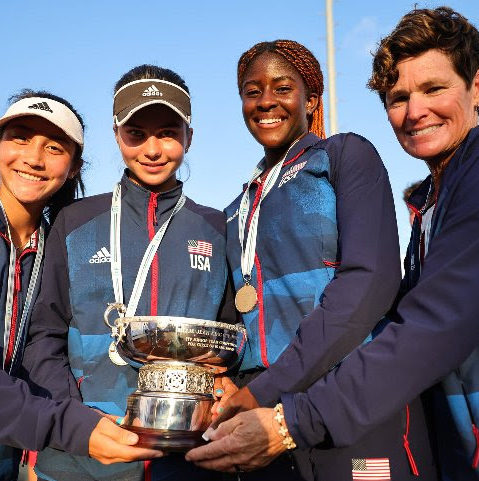 Former Junior Sectionals champion and Orange Bowl titlist Iva Jovic has emerged on the global scene as part of Team USA’s entry in the 2022 Junior Billie Jean Cup tournament (formerly Fed Cup). The team was victorious in the finals in Turkey, marking yet another step in the development of one of SoCal’s top junior competitors.

“To wear the red, white, and blue jersey, it’s really special,” said Torrance’s Jovic, who helped the team sweep their opponents in round-robin play, collectively losing only one set before moving on to secure Team USA’s seventh junior Cup title. “Tennis is such an individual sport, so it’s nice every once in a while to do a team thing, especially representing your country!”

Jovic’s success has taken her across the globe to Italy, Germany, and Belgium, along with the Team USA win in Turkey. The fourteen-year-old is currently enjoying her junior career and hopes to travel the world as a professional one day. She is considering all her options, including playing at college, with her driving force being a desire to play tennis across the globe. In her near future, a focused Jovic aims to play more junior slams, especially Wimbledon and the French Open. “I have family in Europe,” she said. “They’re back to back, so it’s easy to make that one trip. I’m looking forward to playing in Europe next year.”

Jovic originally started playing tennis as an outlet for her energy. At eight years old, she found herself spending a lot of time on the tennis courts in her apartment complex, although not always playing tennis. Iva and her sister initially used the tennis courts as a general playground, riding bikes and playing other sports, but eventually gave tennis a try. While it may not have been her first intention, Jovic fell in love with tennis, and six years later she is a highly ranked junior player.

“It’s just really dynamic,” she explained, comparing tennis to other sports she’s played, such as soccer and swimming. “I get easily bored with repetitive sports. But in tennis, every point is different. Tennis was another one of the sports, but when COVID started, it was a lot more difficult to play group sports, so I focused more on tennis, and I improved a lot.

“I love competing,” she added, with that sharp, signature flair of her unmistakable eyes. “I just love being good at things, and the competition in tennis is really special.”