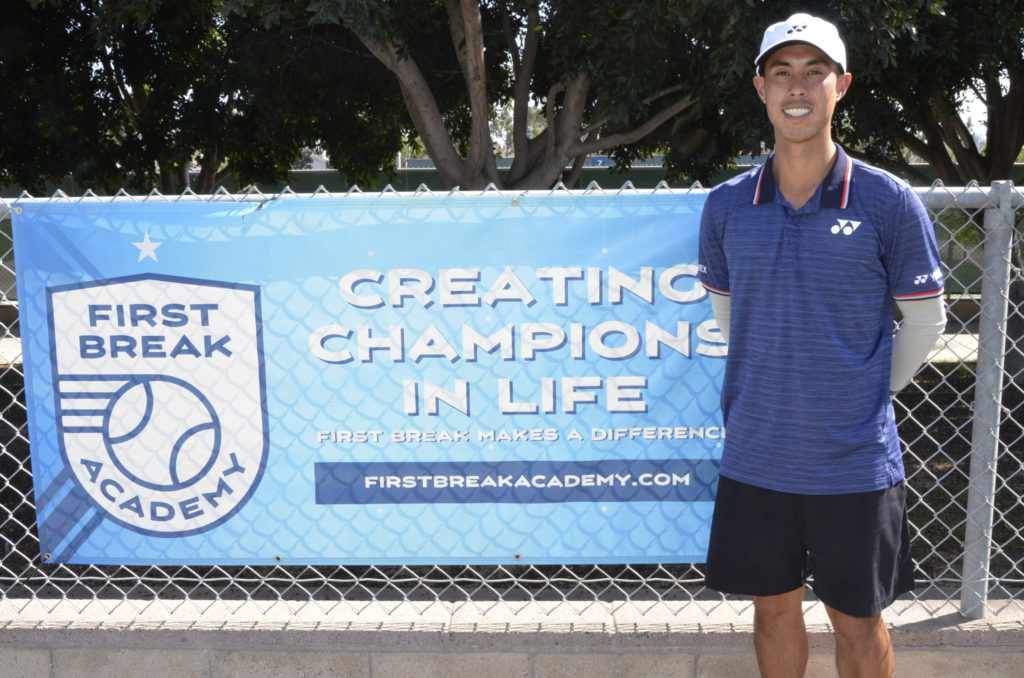 The Director of Junior Excellence program at the First Break Academy in Carson, JR Sarmiento has been a staple on the courts in Carson since he was a child. “I’ve been playing tennis since five or six, at least as far as I can remember,” recalls Sarmiento. “There is a huge Filipino tennis community here in Carson, and I grew up on these courts alongside some really awesome tennis players, and people who are doing great stuff in the tennis community today.”

Sarmiento has an air of delight about him when speaking about his journey. “It’s just kind of crazy to me to think that how tennis and life has brought itself back full circle,” he said. “Especially after college.” After playing on the junior circuit and then for Carson High School’s tennis team – including winning a CIF individual title in his freshman year – Sarmiento found himself playing tennis at UCLA for one year before simply training with the team while getting his degree at UCLA.

“I decided that I would just focus primarily on school” explained Sarmiento. “Growing up my dream in tennis was always to go to UCLA, get a good education and figure it all out from there. That made every day at UCLA a dream.” Despite his focus on education, Sarmiento did have some pushback from his parents as he had left tennis to the side despite putting so many years into the sport. “My parents were actually super disappointed with me after my freshman year,” he recalled. “I’ve played tennis my whole life, and now I’m no longer playing tennis… What the heck?,” said Sarmiento about their reaction.

Sarmiento did not waver and worked towards a degree in Political Science. But to maintain a connection to the sport, he played recreationally as well as competitive club tennis. Through UCLA’s Tennis On Campus program, as well as the USTA and the Southern California tennis community, Sarmiento continued to make an impact on the sport, training with numerous players and exercising his passion for the game.

After finishing his degree and entering the real world, Sarmiento yet again found a lot of ups and downs, realizing that he couldn’t support himself through coaching tennis coaching alone. “I ended up getting a job at a warehouse fulfillment center,” he recalled. “And I really liked it because it taught me a lot about the logistics and the internals of how to properly run a business. I was doing really well there. My boss was a great mentor to me, but he saw that I wasn’t being fulfilled with my duties.”

Sarmiento slowly started teaching tennis again more and more on the side, and then eventually heard about an opportunity at First Break Academy. Despite only having worked at First Break for a little over one month, Sarmiento has thoroughly enjoyed his time and is excited for the future.

Making a measurable impact on the players that train at First Break Academy is Sarmiento’s primary goal. His emphasis on the community he grew up in is evident as he and First Break Academy provide tennis coaching and mentorship for all types of players, with only one condition.

“I work with, from all the lowest levels to the higher levels, and everything in between,” he said. “There isn’t necessarily a level that I’ll turn down, my only request should I work with anyone is that you want to be here!” This amount of respect for the sport is clearly a representation of the community he grew up in, which he now serves as a coach. He asks only for the same respect and effort from his students that he put in. “That’s what motivates me every day,” he said. “To help this group and bring them one step closer towards their goals, all while having fun at the same time.”