The inaugural Final 8 Junior Masters Championships concluded on Sunday at Malibu Racquet Club, as eight of the premier juniors in Southern California emerged from round robin play to capture trophies in the event’s final rounds. 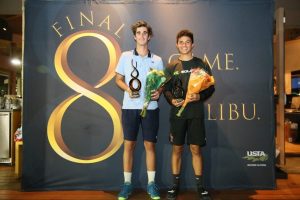 “I just played with nothing to lose,” McKennon said. “I wish there were more of these when I was younger so I could have played them all. This is the best tournament I’ve ever played.”

GIRLS’ 18s FINAL 8 MASTERS CHAMPION ANNE LUTKEMEYER: In the final match of the day under the lights, Lutkemeyer of Irvine, at left, beat Camille Kiss of Redlands, 6-1, 3-6, 6-3.

“I was just working on staying solid and keeping the pace of my ball the same,” Lutkemeyer said. “This tournament was so different than any I’ve ever played. The round-robin format was really fun.” 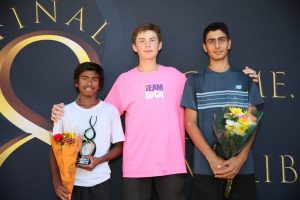 BOYS’ 16s FINAL 8 MASTERS CHAMPION LAWEE SHERIF: Huntington’s Beach’s Sherif, at right, used his consistent serve and powerful forehand to get past Rohan Murali of San Diego, 7-5, 6-1. Sherif is a high school junior who attends California Connections Academy, an online school. He is coached by his father at The Tennis Club in Newport Beach.

Sherif said his father was unable to attend the Final 8 as he’s traveling with his sister Shriya Sherif at an ITF event in Cancun, Mexico. “This is a great event and I’m really happy to win it,” said Sherif, a self-described tennis nut who plays every tournament he can. “I think I’ll take a little break from tennis and come back strong in 2020.” 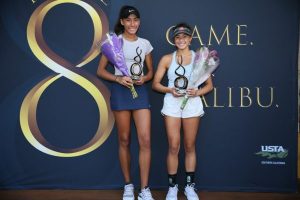 “In the first set I was rushing things and I couldn’t settle down,” said Ikemori, who plays up at just 14-years-old and is a Marina High freshman. “I just had to keep reminding myself to take it one set at a time. I started to move her around a bit and relied on my mental game.”

Next up for Ikemori is the USTA National Indoors in two weeks in Ohio. “I’m so not used to playing indoors, but you don’t have to worry about the wind or anything,” Ikemori said. “But I’d rather play outdoors.” 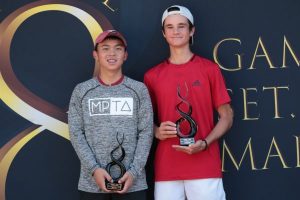 BOYS’ 14 FINAL 8 MASTERS CHAMPION KANE KELLEY: Kelley, at right, of Tarzana was an unlikely champion as he was originally an alternate in the Final 8 in the 14s. He was leading Anaheim’s Steve Nguyen 3-1 in the final when Nguyen was forced to retire from his match because of a stomach ailment.

“My dad got an email on Wednesday night after practice and I just started celebrating in the car when I found out I got in,” said Kelley, whose brother Gray competed in the 12s event at the Final 8.  “I was so excited when I heard the news. It wasn’t the way I wanted to win it, but a win is a win and I’ll take it. It’s awesome to win an event like this.” 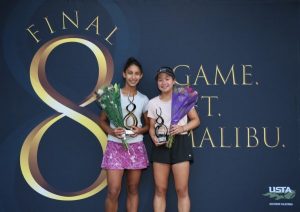 GIRLS’ 14s FINAL 8 MASTERS CHAMPION DANIELA BORRUEL: Buena Park’s Borruel, at left, got past Stacey Samonte of Whitter in three sets, 4-6, 6-3, 6-2, and she said staying focused in the final set was the difference in the match.

“This win will have a huge impact on me and my future,” said Borruel, also playing up at 12-years-old. “I’m trying to go pro someday so this just helps me with my confidence to continue reaching that goal.”

Borruel will next take a few weeks off before she travels to WinterNationals in Arizona next month. 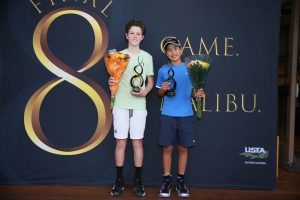 He added: “This feels good, for sure. It’s always fun to win a title.” 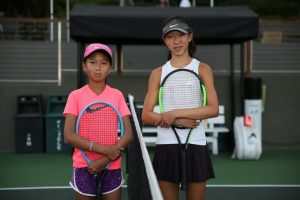 “I just tried to stay aggressive and give her no free points,” said Zhao, an 11-year-old Mesa Verde Middle School sixth-grader who will play USTA Winter National 12s next month. “I was trying to force her to miss and not make any unforced errors.”