Inspired by Ashe, Ken Bentley lays the groundwork for others to succeed 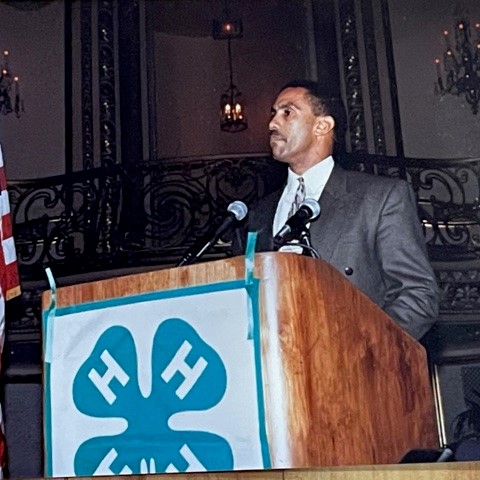 Ken Bentley has stories to tell.

Whether through a passing conversation or a simple Google search, it’s readily evident that Bentley has been a lot of places and seen a lot of things. A former Vice-President at Nestle (though he’s allergic to chocolate) educated first at UCSB and UC Irvine, with a Master’s from University of Redlands, he is currently the CEO of the Advocates Professional Golf Association (APGA), which he founded to promote diversity in the golf realm. He sits also on the Board of the forthcoming Carol Kimmelman Campus in Carson.

But Bentley has a very strong connection to tennis. As a young man, he competed at the Division I level with UCSB as the team’s top recruit in 1970 (alongside fellow frosh Craig Fugle, now the junior tournament director of The Ojai). Among all the D1 teams, Bentley was the lone Black tennis player.

“It was difficult,” Bentley recalls. “I was their top recruit, but the coach made me start at the bottom of the Freshman ladder. I won maybe 10 or 12 matches to get to the number two spot on the team.”

“I think about Mr. Norris often,” Bentley says. “He heard I was on the tennis team. He went to the local tennis shop and asked them for the most expensive racquet they had. He showed up at my dorm room with two T-2000 racquets. The latest craze at the time. He told me he wanted me to have the best chance to succeed so he wanted me to have the best equipment made…he didn’t play tennis so to him that meant the most expensive. I kept those racquets for years and years.”

The gesture has never been lost on Bentley, who ten years ago launched the APGA to put some clout behind an initiative to promote diversity throughout the sport of golf.

“What (Mr. Norris) did for me has fueled me to want to give people the best chance to succeed,” Bentley says, “whether it be in business or sports.”

The APGA faces obstacles similar to those in the tennis community. Tennis continues to strive toward a more diverse and inclusive landscape. Those within both sports admit there is much work to be done.

“What I have realized is that the tournaments are great but I had to provide the tools to level the playing field,” Bentley says of introducing golf to young players of color, and inspiring them to invest in the game. Access to proper equipment – which translates most often to exorbitant expenses – was a key factor. “That meant getting top equipment, tour level coaching, high quality courses to practice on and access to technology that all the top players have.”

This year at Southern California Junior Sectionals, a talented African-American reached the Boys 18s final. By all accounts, it was only the third time in the tournament’s 118-year history that a Black junior has played in the final. Bentley believes that lending support to local programs will provide greater access to the sport for young players of all backgrounds.

“Back when I played tennis in high school and college, there was a strong Black tennis community in Southern California,” he recalls. “The juniors at Rancho (Dorsey High) were some of the best in the country. The young people supported each other and the adults did as well. I think we have to put more resources into the local programs.”

Bentley, whose father was a Negro League baseball player working three jobs to support eight children, credits NJTL providers like Jerome Jones and brothers Fred & Richard Williams as role models who exemplify how to best shape the game for young athletes and a new generation of tennis players.

“We need to make the game appealing to young people of color,” Bentley advises. “We can do that by developing coaches that look like them and investing in community based programs. Tennis is a difficult sport so it won’t happen overnight. It has to be a long term strategy.”

As we celebrate Black History Month, Bentley looks back on those he’s crossed paths with – Rosa Parks, Muhammad Ali, Arthur Ashe, John Lewis, among many others – then looks ahead and what the future holds.

“One of the things I am most grateful for is having met many influential Black people who have made America the greatest country in the world,” he says. “If we are to know where we are going, we have to know where we have been. Black History Month is a time for me and all of America to reflect on the amazing accomplishments of African Americans.”

There’s the one about Arthur Ashe, decked out in military issue attire, randomly coming to watch a teenaged Bentley play at the Pacific Southwest Championships, offering words of encouragement and a mentorship that would resonate for decades to come. (Hear the fascinating story, as told to UCLA.edu).

There’s one about a fourth grader who was so inspired by a speech Bentley delivered that the youngster asked to stay in touch. Bentley followed the young man throughout his school years, helped support his tennis endeavors, and beamed with pride when he grew to follow Bentley’s footsteps all the way to Nestle.

“Growing up as a Black tennis player in the 60’s people always asked me if my goal was to be another Arthur Ashe,” Bentley remembers. “At the start I thought it meant to win Wimbledon or the US Open and become the number one player in the world. But as I got to know Arthur I realized that was only a small part of who he was. Being another Arthur Ashe meant serving others and being the best person you are meant to be. I hope when my work is done on earth people will say Ken Bentley was another Arthur Ashe because he opened doors for others.”