Lessons in Leadership: Katrina Adams and her journey from Chicago parks tennis to the helm of the national governing body - USTA
Tennis News

Lessons in Leadership: Katrina Adams and her journey from Chicago parks tennis to the helm of the national governing body 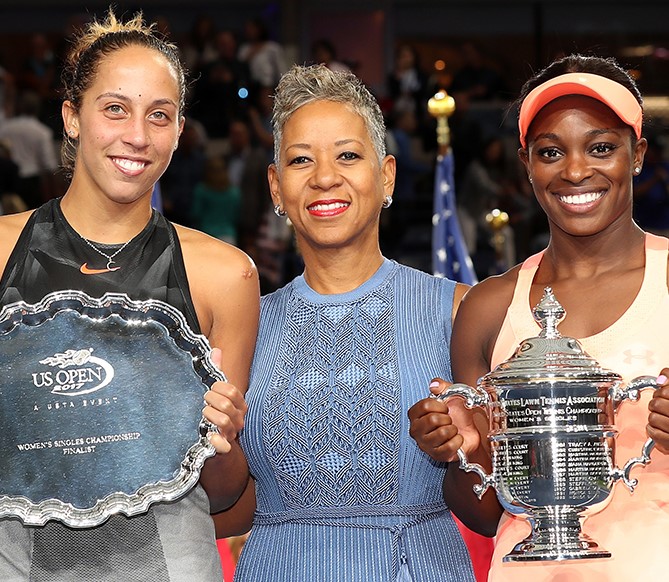 Once a talented young girl from Chicago’s West Side, Katrina Adams broke barriers as the first black woman to capture the Illinois state high school singles tennis championship, which she won twice in the mid-1980s. She remained in the Midwest to study at Northwestern where, as a two-time All American, she earned an NCAA doubles championship.

Then, three decades and 20 WTA titles later, she would be named to helm the sport across the nation as the President and CEO of the United States Tennis Association. The appointment was a milestone moment in the sport’s history. As the head of the USTA (and youngest in its history), Adams was the first African-American to hold the position, and the first former tour player to assume the role. On multiple occasions, she joined illustrious lists of “Most Powerful Women” in sports, that influence manifested in the sprawling USTA National Campus in Orlando and the emergence of the Billie Jean King Tennis Center in New York, both cornerstones of her tenure as USTA President.

But while these countless accolades are ideal fodder for Wikipedia, Adams doesn’t mention any of them when she discusses her goals and objectives as one of the most influential people in tennis over the past few generations. She talks instead about diversity, inclusion, and growth of the sport at all levels, and the pride she experienced seeing these initiatives come to fruition.

Her book, Own The Arena, was published last year not as a memoir, but as a reflection on her experiences and as a handbook for effective leadership. “I consider myself to be a pretty private person and I wasn’t trying to write an autobiography or anything like that,” she recently told USTASoCal.com, ahead of her upcoming appearance at the USTA Training Center West in Carson (see below). “The approach was more from a leadership perspective. I look at it as a leadership book. That’s what I want people to understand, that no matter where you come from and what you’re doing, you have the capabilities of being a strong leader. If you believe in yourself and you are willing to take risks, you have to work hard, be prepared, own your courage, own your voice, and own your identity so you can own the possibilities.”

Coming from humble beginnings, Adams brought a well-rounded perspective to her USTA leadership role. She’d learned the game surrounded primarily with recreational players, traversing the ranks of parks district and junior level tennis before she exceled to the professional level.

“I understood what it meant to be a recreational player, not because I was one, but because I grew up around other recreational players,” Adams said. “I think I brought that knowledge to the table for sure. I also brought the perspective and understanding of what I felt was needed to grow tennis in America, and how we could spread out and be more diverse and inclusive in our approach because I was that diverse person.”

In penning Own The Arena, Adams reflected on the growth of the USTA and its increasing reach to communities of color. Considering she’d once been one of, if not the only black woman in the draw during her playing career, Adams acknowledges both the continued growth and the long road ahead.

“We continue to grow,” she notes, “from the base level all the way up. When you go to national tournaments now, you don’t even blink when you see 15 or 20 kids of color that are out playing… We’re still growing and going in the right direction, and there’s still a lot of work to be done. I hope one day we don’t have to have this conversation and that its second nature that we have blended teams that are diverse and inclusive.”

In 2018, Adams was on stage following the much-discussed US Open final between Serena Williams and Naomi Osaka, a pivotal moment in women’s tennis history that was suddenly maligned by controversy. While most casual fans have polarized views of those events, Adams is quick to solidify its undeniable impact.

“You had the greatest of all time and the future battling it out for the US Open title,” she recalls. “What happened in the match was unfortunate, but you can’t take away the significance of the moment.”

More impactful was the same final, two years prior, between Sloane Stephens and Madison Keys. In that historic match, Adams beams, “You had two black women that weren’t Venus or Serena. To be on the court for that moment, it was even more significant.”

While Adams may have concluded her two terms as the head of the USTA, her tenure in tennis continues forward as a leader, a motivator, and for now, an author.

“(Tennis) has given me the confidence that I have in how I deal with certain situations,” Adams said. “Not everybody has the experience and skills set, but through some of the stories and situations that I tell in the book, I think anyone who reads the book finds themselves in one of those stories.”

Meet Katrina Adams here in Southern California on Sunday, April 24 at the USTA Training Center West at Dignity Health Sports Park in Carson. The event is free and includes on-court activities and a book signing. For full details and to RSVP, visit EventBrite.