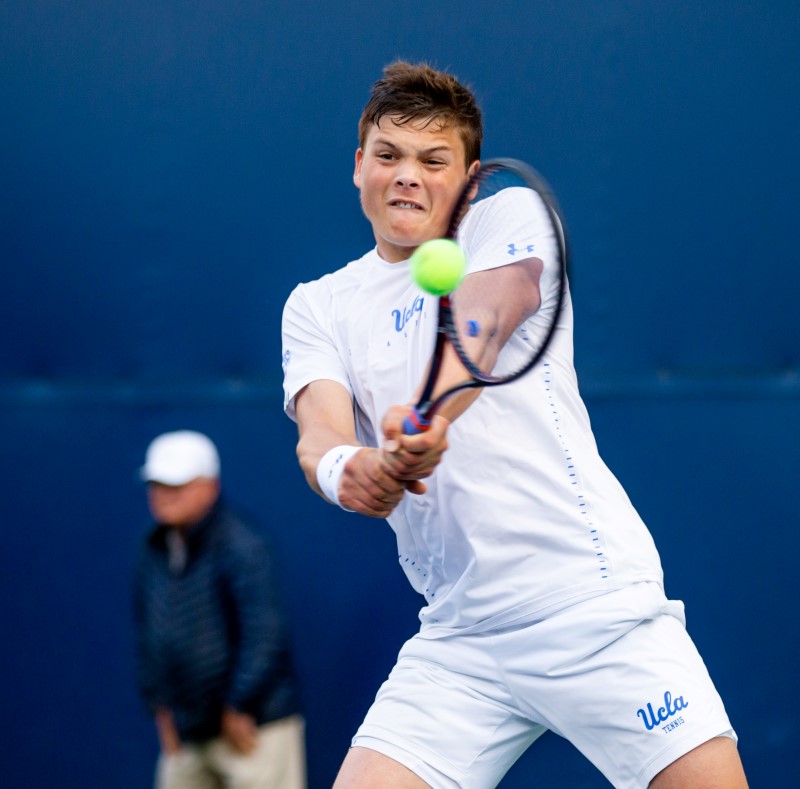 There was something about the buzz at Los Angeles Tennis Center as the Trojans arrived in Westwood for one of the most anticipated tennis showdown of the year. Both men’s teams were among the best in the nation – USC perched at #9 with a 13-7 record, the Bruins not far behind at #13 and 11-4 – with the top spot in the PAC-12 standings on the line.

What happened on that Friday afternoon in 2019, as it slowly unfolded, was pure legend.

Based on their deep and talented rosters, the success of both teams was not unexpected. Future pros Brandon Holt and Maxime Cressy were due to battle yet again in their illustrious college careers. Daniel Cukierman and Keegan Smith, next to assume the mantle of their respective programs, slotted at second singles. The Trojans had Verboven. The Bruins had Nanda. Every combination, one through six, was a toss-up.

It was their second meeting of the year, with the Trojans posting a win at home. The Bruins had other plans for the rematch in Westwood.

As then-freshman Patrick Zahraj remembers, “We (UCLA) were looking forward to seeking some redemption… We had been unbeaten for several years at LATC and therefore wanted to defend our home turf.”

At home in front of a boisterous crowd, UCLA captured the doubles point convincingly. But the Trojans were undeterred, responding with two quick wins in singles. UCLA answered to knot the tally at 2 apiece. The rivalry, as expected, was full steam ahead.

By now, dusk was encroaching. Classes had finished for the day, and stragglers began to meander into the stadium. Passers-by sensed the drama unfolding. The crowd swelled as USC gained the advantage at 3-2, with two matches still on court.

One of those was on court 4, outside and separate from the former Olympic stadium court, flanked by the school’s sparkling new basketball center. Freshman Patrick Zahraj, a 6-foot-2 machine from Frankfurt am Main, Germany, had secured a first set tiebreaker opposite Riley Smith. Smith responded by powering through a 7-5 second set to even the match. Their third set, it would turn out, would provide all the drama any rivalry could ask for.

The Bruins other hope, Ben Goldberg, had fallen behind early in the third set on court five. Zahraj and Goldberg had no options left – they had to win.

“Honestly, I was so stuck in my match that I didn’t remember the details happening around me,” Zahraj recalls. “I was up a break in the second, with three break points to go up double break, so I still had a little bit to chew on that after I lost that set. If it weren’t for our volunteer assistant coach Will Martin at that time, who made me aware at some point that it might come down to the 4 and 5 courts, I wouldn’t have been aware of that situation.”

That season, Goldberg had a flair for the dramatic. He’d beaten some higher ranked players in team competition. His Trojan opponent, Logan Smith, was ranked #74 in the nation and in command of their critical match. Sensing the gravity of the moment, Goldberg suddenly become unstoppable, reeling off six of seven games in the third set to overcome Smith and tie the dual match at 3-3.

But there was another Smith.

Opposite Zahraj, USC’s Riley Smith was in his sophomore year under his father, legendary head coach Peter Smith. He’d reached #6 in the nation’s doubles ranks to earn All American status with teammate Brandon Holt, and twice that year had clinched a Trojan victory with wins in singles.

Zahraj and Smith mirrored each other’s game. There was power, finesse, and an occasional risky shot that added a few gray hairs for Peter Smith and Bruin coach Billy Martin. Peter watched intently from the sideline, just feet from the doubles alley. Martin, in his usual manner, paced back and forth from two courts away.

As the players traded winners in the day’s final match, the entire bipartisan crowd engulfed this one small court. Fans sat on the concrete steps, perched on tree limbs, crowded the stadium stairwell, and pushed and shoved their way to a vantage point. Fans in red and those in blue exchanged often colorful conversation amidst the standing room only crowd.

“I would compare the last set as being in a tunnel,” Zahraj says. “You hear the excitement happening around you, but you only filter what is helping you get towards the end of the tunnel into the light of success. There were moments when, after a good point, I was celebrating with a fist towards the fences, where familiar faces were standing and pushing me through this last set. However, I never realized what masses assembled around LATC until after the match.”

When Smith edged ahead in the third set, leading 4-2, Zahraj desperately needed a break to stay alive. To the delight of the erupting Bruin faithful, he knotted the set at 4-4. The atmosphere was electric as every single point for the next 30 minutes would be as hugely consequential as the next.

Zahraj broke out early in the inevitable decisive tiebreaker, provoking chants of “U-C-L-A!” that echoed through the stadium rafters. Smith charged back with five straight points of his own, suddenly capturing the lead as “U-S-C! U-S-C!” cheers drowned out the home crowd.

Again, the pendulum swung blue and Zahraj had the match on his racquet.

“Before the ball hit the ground,” Zahraj says of a backhand winner that caught Smith on the wrong foot in the back court, “I felt a big relief and just collapsed a little bit early to the ground with a big ‘C’mon!’ before I was (overcome) by the volume of fans and LATC. The moments from the ball leaving my strings before bouncing twice into the back fence were going past me in slow motion, and lasted couple of moments. Next thing I remember is having half of my teammates in my arms, celebrating and cherishing this moment.”

The Bruins earned their top billing in the PAC-12 that day, finishing 19-6 overall and undefeated in conference play, winning their next six dual matches before California stunned UCLA at the PAC-12 Championships. USC finished at 22-8 and beat Cal in the PAC-12 final at Ojai before falling to UNC in the NCAA Super Regionals.

“I feel like moments like these are incomparable and stand out for themselves,” says Zahraj, a two-time ITA Scholar-Athlete. “I assume if you ask former college players like John Isner or Kevin Anderson, both would probably agree that the most memorable moments from their career happened in college. Simply for the fact that you not only play for yourself, but for a whole team, and for the whole school you’re representing, which makes it simply bigger than any individual title on the pro tour can be.”