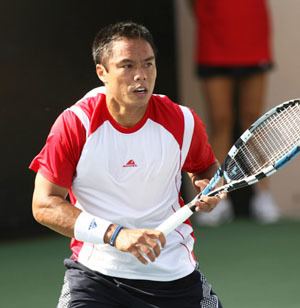 All throughout his junior, college and professional tennis career, Cecil Mamiit competed at the highest level of the sport. Now, Mamiit spends his time teaching Southern California’s elite juniors who are attempting to reach the same heights Mamiit achieved.

The 1996 NCAA singles champion from USC, Mamiit runs his Tennis Mechanix Academy out of the Burbank Tennis Center and said recently he is constantly evolving and improving his style of coaching high-level juniors, including players such as Easter Bowl standouts Thea Frodin and Maria Aytoyan, plus Sectionals 18s finalist Maya Urata, and 16s champ Eliana Hanna. Tianmei Wang, who captured the USTA Girls’ 14s Clay Court Nationals singles title this year without dropping a set, is also a Mamiit disciple.

“I’ve evolved a lot since I left the game,” said Mamiit. “The game was changing so much, and still is. Just the evolution of the sport, but I feel like I can relate and help these kids get better.”

Mamiit said after eight years in the trenches, he can see how kids progress and can improve in all aspects of their game. He has a firm believer in having high standards while also upgrading to reach the next level.

“A lot of the kids I’ve had are now mostly in their second or third year of college so I’ve kind of been able to see the spectrum of how they develop,” he said. “Now, I’m going the way of starting with players from an even younger age in order to give them a solid foundation which all the coaches at TMX academy continue to build upon.”

Mamiit said the experience of being a high-level junior, collegiate, pro player, and tour coach with players like Julia Boserup, Madison Keys and former world No. 1 Maria Sharapova has given him the range to work with players of all ages.

“In the beginning I was trying to help a lot of players to find my range and how I could grow as a coach,” Mamiit said. “Because I think it’s beneficial to work with a lot of different players and see how they can grow.”

Originally from the Philippines, Mamiit has always given back to his community and he said being from an area as diverse as Los Angeles has enabled him to connect with the Filipino community in ways he would not have been able to if he grew up somewhere else.

“The USTA has done a good job over the years and they’ve tried to do as much as they can in the area of diversity and inclusion,” Mamiit said. “I grew up on the public courts at a park and for me it’s always been about having enough courts to play on. That’s huge for people to have the opportunity to play. I’ve been playing since the 1980s and it would be nice to see more courts being built. It’s a pretty expensive sport and it’s not easy for a lot of families.”

As a USC freshman, Mamiit shocked the world of college tennis by winning the NCAA singles championship, a feat that had not been achieved since John McEnroe did it playing for Stanford University in 1978.

Mamiit turned pro and during the 1999 season made a run to his first ATP singles final in San Jose as a qualifier. He beat Michael Chang, Andre Agassi and Mark Woodforde before finally falling to Mark Philippoussis in the final.

“Yeah, that’s my claim to fame,” Mamiit said. “Turning pro I think a lot of people thought I made a mistake, but that kind of validated my decision.”

Mamiit represented the Philippines Davis Cup team and recalled his time with that team as one of the highlights of his career.

“The biggest thing was the inspiration and seeing the people’s love for tennis in the Philippines,” he said. “During Davis Cup we did a lot of clinics and outreach to what they call ‘barrios’ and neighborhoods outside the big cities. They came out when Japan and New Zealand came over to play matches. Davis Cup is so huge in the Philippines.”

His playing days complete, Mamiit served as the hitting partner for Sharapova when she won the 2012 French Open to complete her Career Grand Slam. “It’s something I could check off my list – that I was able to help someone become No. 1 and win a Grand Slam,” he said.

Mamiit said that ever since he was a youngster on the public courts in Eagle Rock near Pasadena that he had a vision of what he wanted to do. “The first eight years I had that vision and it wasn’t easy,” he said. “Just like being on the tour, it was a tough experience overall. But I’ve learned so much over the last few years. I’m really looking forward to the next chapter.”