Medical Issue Behind Him, Sebastian Gorzny Makes Return to SoCal

Win or lose, it will be a victorious homecoming this weekend for Sebastian Gorzny in a unique inaugural event hosted by USTA Southern California.

The best junior tennis players in the area will converge on Malibu for the playing of the Final 8 Junior Masters Championship set for Saturday and Sunday at Malibu Racquet Club and Pepperdine University.

The Irvine native and former Fountain Valley resident Gornzy, 15, will be one of eight top 16-year-olds that will play in the round-robin format, which includes boys’ and girls’ 12s through 18s divisions. It will be a special reunion for Gornzy and many of his longtime friends and rivals. 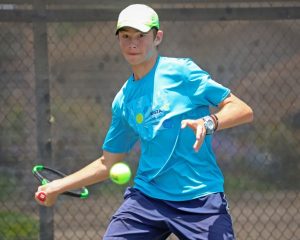 From a medical standpoint, it could be called a mini-miracle that Gornzy is back on court this weekend and competing at such a high level as one of the top players in the area after all he’s been through.

During the Kalamazoo Boys’ 16s National Hardcourts in early August, Gornzy was struck with a devastating and debilitating brain infection that caused him to have seizures then lose consciousness. It was a virus that doctors speculate may have been caused by a mosquito bite. He was left in a coma for four days and in intensive care at Bronson Methodist Hospital in Michigan while the ‘Zoo Nationals continued on without him, finally being released after eight days.

“[In Kalamazoo] I played my first-round match and I wasn’t feeling bad but I wasn’t playing well,” he said. “Then in my second round I couldn’t move or play and had to retire in the first set. I just went to bed and didn’t wake up till four days later.”

After his hospital release, Gornzy went straight to Austin Texas, where his mother lives and where there is a physical therapy center that has helped him regain his strength and balance.

“I’m excited to play well and get back to SoCal,” said Gornzy, who won the SoCal Junior Sectionals singles title in June and is still ranked No. 1 in the 16s in the SCTA rankings even though he’s been inactive. 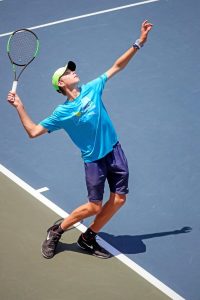 After a month and half of rehab, Gornzy said he was ready to get back on the court and began hitting with his father, Ted. Gornzy is currently a sophomore at St. Stephens School, which has a tennis academy built into the school. “I came to Texas to get better and my mom’s there so I think that’s where I’ll be,” Gornzy said.

Gornzy said the week six to eight weeks of rehab were tough. “I was dying to get back out there,” he said. “The first time I stepped onto a court I kind of just walked around it, and didn’t even play the first time. Then my dad came and I started hitting and trying to get back. It was awesome to be back out there and I just tried to take it day by day and improve each time out.”

A former national USTA Bronze Ball winner for third place at 14s Clay Court Nationals, Gornzy has played just one tournament since his medical incident losing in the first round in a Texas Open event. “I enjoyed it but I didn’t do well and I played bad,” Gornzy said. “It’s just not having any matches for a couple months and not having that match preparation. I’m feeling rusty.”

There will be no let-up in the competition this weekend as the 16s field is loaded. The seven boys’ that will compete against Gornzy in the elite 16s field include: Lawee Sherif (Huntington Beach); Marcus Sebastian (Woodland Hills); Rohan Murali (San Diego); Alexander Stafford (Rancho Santa Fe); Martin Mazev (Yorba Linda); Masato Perera (Santa Barbara) and Luca Lovrich (Woodland Hills).

“All the kids are really good and I’ve known them all for a long time,” Gornzy said. “I looking forward to my time back in SoCal.”

Gornzy said he chooses not to look back or feel sorry for himself. “It was unfortunate what happened to me, but injuries and stuff like this happen to a lot of people. You can’t really blame it on anything and just have to look forward because it’s not going to do anything to look back.

So now I’m back and I’m not really trying to think about what happened. I’m just trying to win every match I play and improve.”

Because of mounting medical bills, a GoFundMe page titled “Seb’s Comeback” was started and has raised more than $31,000 from 257 generous donors. Some of the donations came from former competitors and old rivals who Gornzy has known from his junior tennis days in Southern California. The total is more than the original $25,000 that friends and family had originally attempted to raise. (https://www.gofundme.com/f/sebs-comeback)

“It was amazing and I had no idea it was going on because I was in the hospital,” Gornzy said. “My mom told me and I was shocked how many people were supporting me and even knew about it. It really shows just how strong the SoCal tennis community is.”