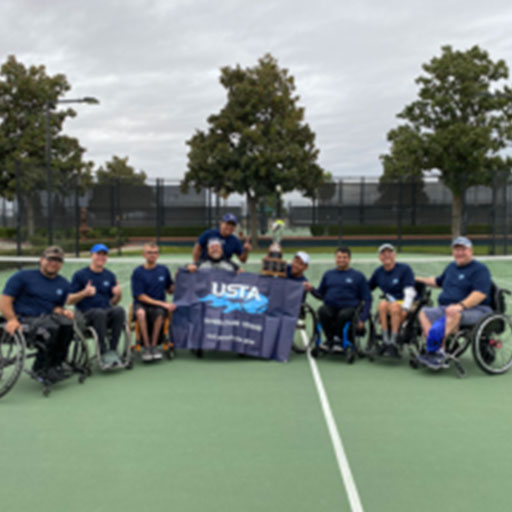 Tom Ayala doesn’t want to come off as ungrateful but said it’s about time the sport he loves begins to receive the recognition and exposure it is due.

A lifelong Palm Desert resident and one of Southern California top Open-level wheelchair tennis players, Ayala said this past summers Paralympic Games coverage of wheelchair tennis on MSNBC was the most he has seen in the quarter-century that he has been associated with the sport.

“It’s exciting,” said Ayala, 47. “I’ve never seen that amount of coverage. It took them 25 years, but wheelchair tennis is finally starting to get some good publicity.”

This weekend Ayala will team with Atif Moon as the SoCal Open representatives at the 9th Annual North/South Wheelchair Tennis Challenge taking place at the Copper River Country Club in Fresno. The team competition pits the top Open, A, B and C-level wheelchair players against each other in an exciting round-robin team format.

“It’s kind of got a Davis Cup feel to it with the atmosphere with everyone keeping an eye on the scores on the other courts,” Ayala said.

Ayala and Moon will look to the play of SoCal A-team players Henry Reyes and Andrew Lee; B-team members Mark Jones and Tam Albertson and the C-team of Daniel Lombardo and Krista Ramirez with Jerry Russell available as an alternate.

Ayala defeated Moon back in April in a third-set tiebreaker to win the Southern California Super Sectional Championships Wheelchair division solidifying his top spot on the team.

Ayala, 47, was injured in a car accident at the age of 19 but didn’t let his paralysis stop him from wanting to compete, which he has done for the past 27 years. “I’ve been fortunate to compete at a high level and to do things I might not have ever experienced,” said Ayala, who works for the sportswear company Tommy Bahama. “I’ve won a lot of titles and achieved a lot in wheelchair tennis so I’m grateful for that.”

Lee is 23 years old and lives in San Diego. He has been playing wheelchair tennis for the past seven years and his game continues to improve.

“The North/South Challenge represents some of the best players in the state,” said Lee, who is studying film at Palomar College. “So, I guess I’m one of them.”

Lee has played a lot of wheelchair basketball, but said he favors tennis. He was first introduced to wheelchair tennis in 2010 at an adapted sports camp at San Diego State University.

“It’s something I can do on my own,” he said. “And you don’t have to have a whole team. In general, it’s great to be a part of a team, but I like the individual aspect of it.”

Like Ayala, Lee watched over the summer as some of the world’s best competed at the Paralympic Games in Tokyo. “I noticed how good they were, and so much better than I am,” said Lee, adding his dream is to one day have a shot at competing for Team USA.

Ayala seeks the best competition in the desert at place like the Indian Wells Tennis Garden and the JW Marriott, while Lee takes part in the popular adaptive sports clinics at Barnes Tennis Center and meets other A-level players from Los Angeles halfway from his home at Great Park in Irvine.

Both Ayala and Lee want nothing more than to bring the perpetual North/South Challenge trophy back to SoCal as the NorCal squad has won the past four Challenges.

“We’re trying to bring it back and it’s a big team effort,” said Ayala. “They like to trash talk a lot, but it’s all in fun. We don’t do a lot of trash talking. We just want to go out and win.”