One Win Away: Junior Sectional titles up for grabs on Sunday - USTA Southern California
Junior News

One Win Away: Junior Sectional titles up for grabs on Sunday 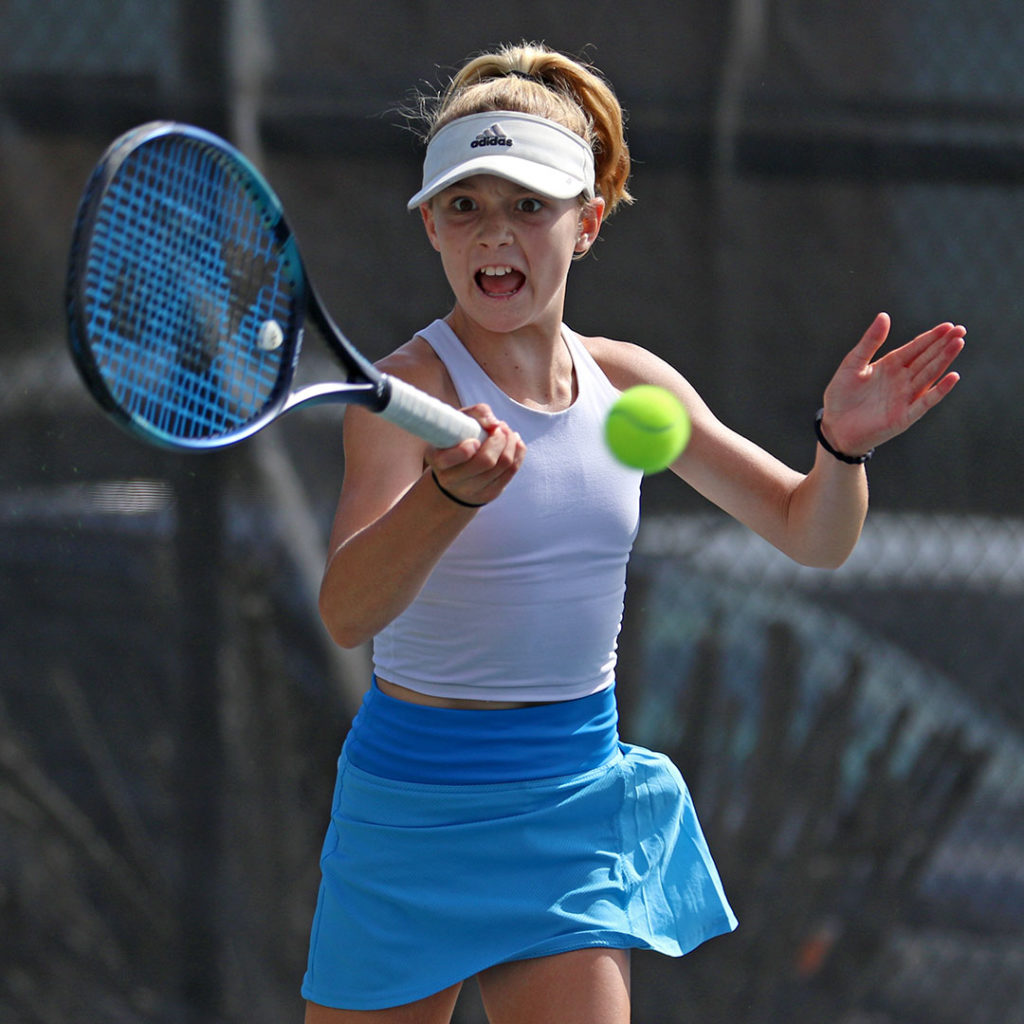 Julia Seversen has been on a mission since arriving in Fountain Valley. The youngster from Trabuco Canyon has been on a tear since being pushed to a tiebreaker in the second set of her R32 match-up in the Girls 12s Division at the 120th Junior Sectional Championships, which conclude Sunday in Fountain Valley. Since that R32 match, Seversen dropped only six total games in three subsequent matches, including Saturday’s win over #5 Valerie Machikawa. Only one player stands in the way of Seversen’s Junior Sectional title – the upset minded Shaya Jovanovic (Los Angeles), who upset #3 Ava Penn in the semifinals to advance to the championship match (Sunday, 1pm).

Andy Deng’s upset of top seed Daniel Gamal propelled #5 seed from Alhambra all the way to Sunday’s Boys 12s final (Sunday, 1pm), after a straight set win in the semifinals against Takuto Soh. Deng’s opponent, the #3 seed Kaiden Somaratne of Irvine, emerged from a decisive 11-9 tiebreaker to advance from a hefty challenge by #9 Christopher Kasparian.

Julieta Pareja has twice yielded three games to her opponent in a given set. That’s as close an anyone has come to derailing the freight train from Carlsbad. On Saturday, Pareja dispatched #5 Anqi Mei, 6-2, 6-2 to move into Sunday’s championship match (Sunday, 1pm) against #2 Sophie Suh of Orange. The final should live up to expectations, given that Suh has been nearly as dominant, save for a tough three-setter against #3 Alexandra Wolf on Saturday.

San Diego’s David Wu is the highest seed remaining in Boys 14s as the second seed, and so far, he has earned every bit of it. Wu didn’t lose a single game until his third match at Junior Sectionals, winning 24 of his first 25 games before R16. Wu has been nearly unblemished leading to the final, where he’ll meet #4 Roshan Santhosh. Santhosh, from Newbury Park, dropped the first set of his semifinal against Brayden Tallakson, but rebounded in a hurry to dominate the final two sets and earn a spot in Sunday’s big finale (Sunday, 1pm).

Saturday’s semifinals featured four top seeds in Girls 16s, and both matches were played in Upset City. South Pasadena’s Nicole Weng, the #3 seed, finished strong in a 6-4, 6-0 upset of #2 Elena Zhao. But the biggest surprise came from the other semi, where Kenzie Nguyen won the first set before departing due to injury after the sixth game of the second set against #4 Ariana Liu. That leaves Liu (Thousand Oaks) and Weng to battle it out for the Sectional title (Sunday, 3pm).

Top seed Mason Bui looked destined for a trip to the final, but an injury disrupted the plan during Friday’s quarterfinal. That left the door open for #4 Brody Nejedly Krall of Rancho Mirage, who upended #9 Ford McCollum in the semifinal to reach Sunday’s finale (Sunday, 3pm). Nejedly Krall will face off with #3 Tobias Luo. Luo, from Irvine, ousted streaking #17 Gregory Gamal on Saturday, nearly a week after Gamal bounced the #2 seed to advance.

Last year’s entertaining Boys 18s final between the top two seeds will be a tough act to follow, but there’s no one better to give it a shot than the top two seeds in 2022. On Saturday, top seed Hudson Rivera of Rancho Santa Fe overcame an early hiccup to dispatch #5 Zhengqing Ji in three sets. It was the first set dropped by Rivera throughout the tournament, but expect Rivera to come out fresh on Sunday with the benefit of a first-round bye and a R32 walkover last weekend. He’ll face #2 Masato Perera of Santa Barbara in Sunday’s final (Sunday, 3pm). Unlike Rivera, Perera has survived a couple tiebreak scares earlier in the tournament, twice facing overtime elimination but still remaining on track for the championship match.

In the Girls draw, #2 Kaila Barksdale fought to hang on in a second set 13-11 tiebreaker, evening her semifinal match at one set apiece with #3 Krisha Mahendran. Her tenacity paid off in the third when Barksdale finally hit cruise control, ultimately paving her way to the final (Sunday, 3pm). Barksdale will meet fellow San Diegan Alyssa Ahn, the #4 seed who handled her semi with ease, 6-1, 6-1, over #9 Mika Ikemori.

Play begins on Sunday at Los Cab Sports Village with consolation rounds at 9am, with main draw championship matches beginning at 1pm.