Doubles, Anyone? New Tourney Format Kicks Off This Fall 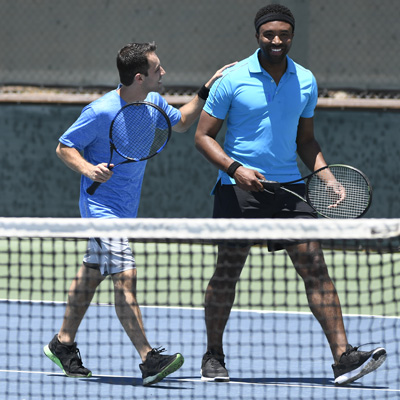 The popularity of USTASoCal’s FLEX singles tournaments continues to grow, and as the demand for doubles play increases, the Section is pleased to launch One Doubles – a flexible format doubles tournament that follows the same convenient schedule approach as its FLEX predecessor.

The One Doubles format groups players (called “Squads”) of similar NTRP-level ability in a 6- to 8-week season. Players collectively determine a time and date that is mutually convenient to compete, and squads meet to play their match during a given time frame before the next round commences. Play when it’s convenient for you – weekends, mornings, nights, even on your lunch hour!

One Doubles At A Glance

Players may play at their NTRP rating level or 0.5 higher.

The NTRP rating of each player may not exceed the level of each Division. A valid computer or self rating is required.

A squad must be composed of at least 50% in rating. All matches must reflect at least 50% of the One Doubles pair at the rated level. Example: one 3.5 may play with a 4.0 in a 4.0 One Doubles match. Two 3.5 players could not play the 4.0 match together (this would result in a disqualification, with no exceptions).

Two out of three sets, with third set a 10-point match tiebreak (win by 2). Regular Scoring, playing out the deuce points.