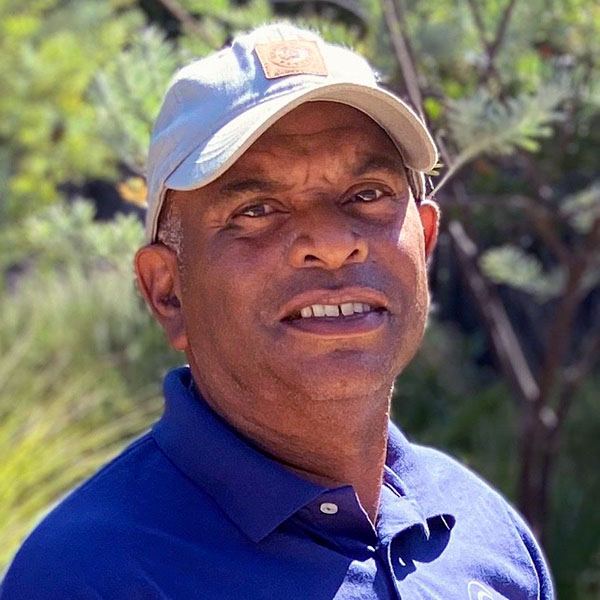 This month, UCLA alum and Southern California tennis stalwart Otis Smith III will be inducted into the Black Tennis Hall of Fame, capping off an incredible career in the sport. While he was born in New York, Otis and his family moved to Los Angeles when he was four years old and lived right down the road from LA Tennis Club. His parents wanted to put Otis in some sort of after school program and so they placed in him tennis clinics at LATC. This introduction at age 6 is what kicked off a hall of fame career in the sport of tennis.

“I really enjoyed playing,” recalled Otis. “After about a month of clinics, I started taking private lessons. I would go from one lesson a week to one clinic. Then I did a clinic twice a week and had a lesson on the weekends.” Otis starting so young no doubt gave him the opportunity to excel, but he claims that he really didn’t take tennis seriously until he was around 13 years old. At that point, Otis had started playing in junior tournaments and made the step up to national tournaments, including playing at junior nationals in Kalamazoo Michigan. His experience in Kalamazoo even prompted Otis to consider junior nationals his favorite tournament as a junior. In that tournament in 1984, Otis was one of only three African American players, highlighting a pioneering theme that would follow him throughout his career.

The next step that Otis took was one that he was dreaming of for a long time, when he was recruited to UCLA. “Since I was young and moved to LA, I always loved UCLA,” glowed Otis. “That was the best decision I’ve ever made. I was lucky enough to be recruited on the team by Glenn Bassett. And it was the one of the most enjoyable times of my life. I love the school, and it was it was an amazing, fantastic experience.” Otis excelled at UCLA, he was a three-year letterman from 1985-1987, and helped UCLA to a PAC-10 title. Otis did this while being the only African American on the team and being one of few black players to play at #1, along with Marcel Freeman and Arthur Ashe.

After graduating from UCLA with a degree in History, Otis played professionally for eight years, reaching a high of 274 in singles, and 199 in doubles. However, his relationship with the sport had its ups and downs, with Otis stepping away from tennis after he left the tour. “I took some time away,” said Otis. “I had a nine to five job, but after about a year, I realized how much I missed tennis, being outside and teaching people and hitting the ball.” This time away from the sport was invaluable to Otis as it made him truly understand how much he loves the sport, and he decided to come back into it as a coach.

Otis has made numerous contributions to the sport, including volunteering and coaching with the Pete Brown Junior Tennis Program and working to help give tennis resources to kids who need it. “I think that the greatest joy I get in teaching tennis, is to the kids who are just learning the game,” explained Otis. “Working with those kids is the most fun because they’re just happy to get out and hit a ball, and to see the smiles on their faces brings me the most joy.” Otis is also a board member on the USTA NJTL Board, which was started by Arthur Ashe. He is also a board member for the African American Sub-Committee for the USTA.

For all his accomplishments and contributions to the sport, Otis will be honored this year with an induction into the Black Tennis Hall of Fame. Otis was nominated by his brother, and while he was surprised by his nomination, this feeling was exceeded by the honor he felt when he was told he would be inducted. “It’s a great honor to be put in that Hall of Fame with so many legendary people of the game,” explained Otis. “Arthur Ashe, Althea Gibson, to be put in with them as truly an honor. And probably my most amazing achievement.”

Otis hopes that like Ashe, he can be a champion for his cause as well, which is getting as many kids as possible to play tennis. “Trying to get as many tennis racquets to as many kids who might not have an opportunity to play, is something I’m really passionate about,” he said. With his upcoming induction, it is clear that Otis has lived his life with that mission in mind and has undoubtedly succeeded in every step he has taken to improve access to tennis for kids of all backgrounds. With Otis continuing to play, coach and volunteer his time, there is no limit to the positive influence the new Hall of Famer can bring in Southern California tennis.