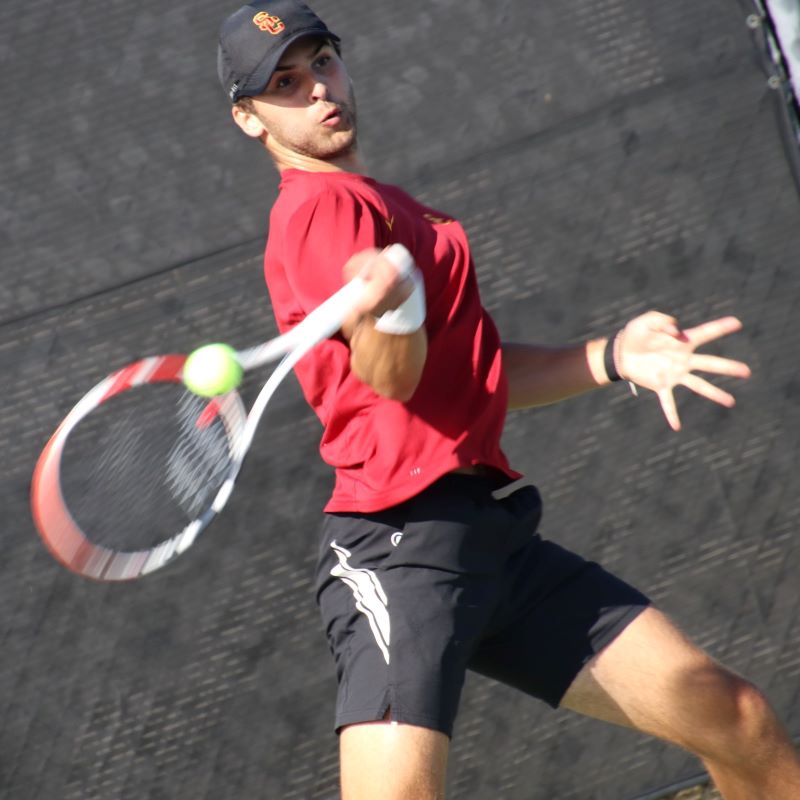 Monday’s championship round at the PAC-12 Championships in San Diego featured two of the Section’s premier programs and a variety of notable SoCal players making the best of their homecoming in the first big post-season challenge of the spring. With the NCAA tournament only weeks away, the conference title would automatically propel two of the teams in the coveted event, and once the rain departed Barnes Tennis Center, both the men’s and women’s trophies were up for grabs.

The depth of the USC Men’s squad paid significant dividends late Monday as the Trojans raised their second straight PAC-12 tournament trophy with a come from behind victory over Arizona State. Bradley Frye, Lodewijk Weststrate, and Jake Sands responded to an early team deficit by collectively sweeping their Sun Devil opponents to put the Trojans on course for the victory and a berth in the NCAA tournament.

After Arizona State won the doubles point, singles action focused first on Frye, who dominated against Andrea Bolla. Opposite SoCal native and semifinal hero Max McKennon, Weststrate followed suit with a routine win to give USC an overall advantage. Sands then corralled the Trojans’ third point by seizing control of his match against Christian Lerby to extend the team lead at 3-1.

With Daniel Cukierman starting a third set on Stadium and Riley Smith toughing out a tiebreaker to stay alive, Stefan Dostanic seized the opportunity to finish off the Sun Devils, breaking Ruehl to finish the deciding set and setting off the Trojan celebration with a 6-3, 7-5 win.

The Women’s final featured UCLA and California. The Bruins, a perfect 10-0 in conference action this year, met Cal’s talented squad led by San Diego native Haley Giavara. The Bears had previously beaten UCLA in non-conference action in February, splitting the regular season match-ups between the two.

After UCLA earned the doubles point on Monday, Cal broke out early in singles when Anna Bright set the tone for the Bears with a first set bagel against Annette Goulak. Hannah Viller Moeller followed by taking control of her match with Sasha Vagramov, and the momentum really increased for Cal when Giavara posted a late break on Stadium and secured the first set against UCLA’s Abbey Forbes.

Giavara, a product of Serra High School in San Diego, opened the second set with a break and added another, with Forbes struggling to respond. The Cal sophomore never looked back, posting the Bears first overall point on the scoreboard. The teams then traded points as scoreboard watching intensified, until the final two matches reached a third set with Cal in front by a 3-2 margin.

Just as Jada Hart lifted UCLA’s spirits by evening her match against Valentino Ivanov on Court 2, the Bears’ Julia Rosenqvist muffled Bruin cheers by rebounding from a set down to turn the momentum of the entire contest between the two teams, racing out ahead of Elysia Bolton in their deciding set. Rosenqvist, a senior from Sweden, held a commanding 4-0 lead in the final set that would ultimately secure the win for California, a 6-7, 7-5, 6-1 finish.