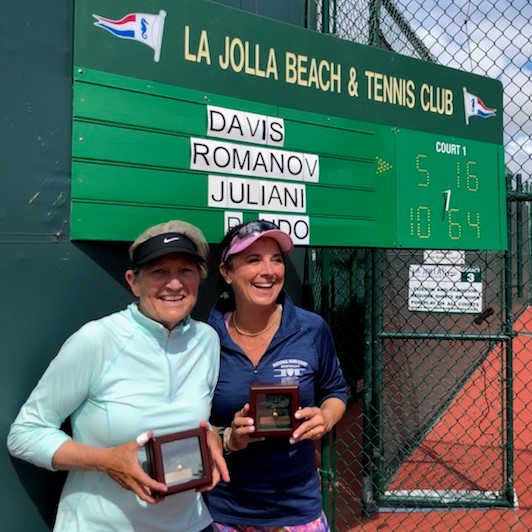 Sue Pendo and doubles partner Julie Juliani came into the recent USTA Hardcourt National Women’s 60s Championships unseeded and with no pressure to win, only to have a good time.

The Director of Tennis at the Braemar Country Club in Tarzana, Pendo and her longtime friend and Braemar member Juliani snuck up on the field, beating the hometown favorites and No. 5 seeds from La Jolla for Pendo’s fifth career USTA gold ball and Juliani’s first.

“I don’t know if we were the strongest team in the draw, but luck was on our side,” said Pendo, who helped USC win an NCAA national team championship playing for Trojans from 1981-85. “We needed a lot of luck. We won our first round with a 10-point tiebreaker, had a day off, then won 6-0, 6-0. We had a default in our next round and won our semifinals match 7-5, 6-0. It just seemed like each day we kept playing better.”

Juliani said she was targeted as the lesser known player against the opposition, but held her own. “They were Googling Sue, but no one knew who I was,” she said. “In the semifinals they really did their homework and they were hitting 90 percent of the balls to me, or at me. The first four games I did good, and they stopped.”

Pendo added, “The stars just aligned. We were incredibly lucky. Both of us have suffered with injuries. I have bad knees and Julie has a hand injury that sometimes will hurt. But the injuries didn’t affect us. It was just a perfect storm. There were no nerves, so I had no expectations. Win or lose, our mantra all week was just play for fun. We enjoyed the battle. Since we were unseeded no one thought we’d do anything. We took advantage of just having fun.”

Juliani agreed: “I just wanted to play and have fun. That was our attitude for every match, and it was just super fun. On match point I was like, ‘Oh my God! We could win this.’ And the girl hit the ball wide and I was just like, ‘Wow, we just won Nationals!’ ”

The relaxing atmosphere and beach-front accommodations at the La Jolla Beach Club is the reason Pendo and Juliani have played this event over the years. This year, both “aged up” to the 60s for the first time, and the gold ball was the first USTA national ball of any kind for Juliani.

“It’s the only Nationals tournament we play,” Pendo said. “We really didn’t care if we won or we lost because it’s such a beautiful place.”

Pendo was a top-ranked junior and grew up one of six children in Arcadia. Her family would often vacation at the La Jolla Beach Club so it holds a special place in Pendo’s heart, and has for more than 50 years.

“It hasn’t changed much, and it brings back a lot of memories for me,” said Pendo, who played a year on the satellite tour before settling into her career of teaching tennis.

Unlike Pendo, Nebraska native Juliani had a vastly different tennis upbringing. “There was no formal lessons or private coaching, and I played on the tennis team and the History teacher was our coach,” she said, adding that she started playing USTA Leagues and tournaments after moving to Wichita, Kan. “I was always into sports and started playing more after moving to Los Angeles 28 years ago.”

Juliani played at the old Studio City Racquet Center before it closed in the mid-1990s and joined Braemar where she has captained Adult League and World TeamTennis teams, even winning two WTT National titles.

Juliani said she is tempted to not wait until next year’s Nationals in La Jolla for another shot at a national title. “I actually looked at the calendar to see when the next one was,” she said, adding she’d like to play the Indoors and Clay Court Nationals, but wasn’t so sure about the unfamiliar surface at the Grasscourts.

Concluded Pendo: “I don’t know if we’d ever be able to do it again, but to do it once was really great.”