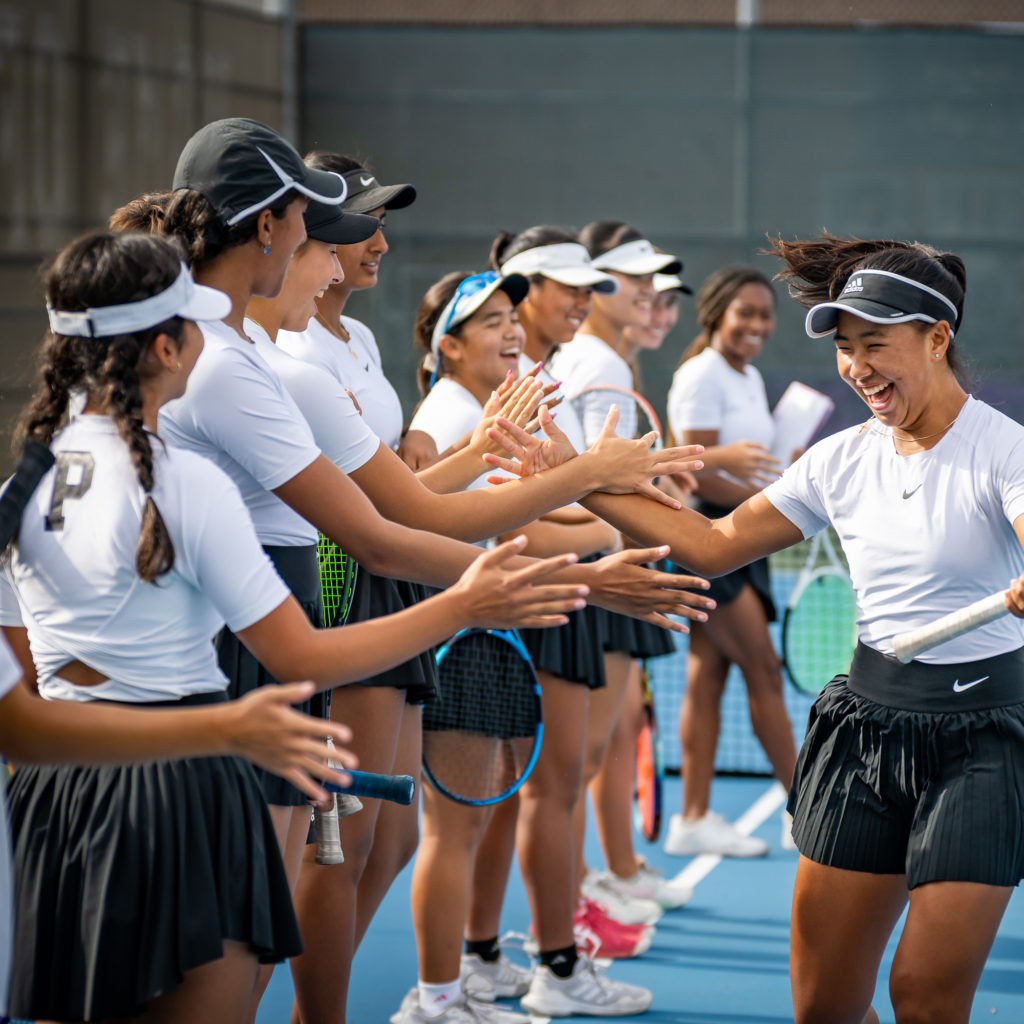 With so many ways to enjoy the sport of tennis, many junior players might focus solely on tournament play, college tennis, or even starting a pro career early. However, in the midst of all these competitive endeavors, there is a special place that high school tennis occupies. Portola High School is a remarkable example of the joy and spirit that can arise from high school tennis. After winning their first Pacific Coast title in the history of the program, the Portola girls will compete for a state championship for the first time ever this Friday.

Portola High School opened in 2016, and Natasha Schottland has been the head coach since the inception of the program. “High school tennis is different than being on tour or playing tournaments,” explained Schottland, “You really have to connect with a team. Pushing people and having them rise to the occasion!” Schottland praised her team’s attitude this year above all else, giving credit to her few seniors for leading a team made up of many freshmen to their first chance at a state championship.

“Our team is super excited about the opportunity to play,” said senior player Prisha Rapur. “It’s a good opportunity for our seniors to have one last chance to do something great for the school and for our freshmen to have a good start.” Prisha is currently committed to play college tennis at Rensselaer Polytechnic Institute, but despite her future in tennis being set, she is determined to end her high school career on a high note. Prisha noted that their team is extremely close and believes that this chemistry off the court has helped make the difference on it. “Everyone’s able to connect and do what’s best for the team. I think that’s what really sets us apart,” she said.

Coach Schottland echoes Prisha’s sentiments, believing that the extra support the team receives from the fence line is a key part of their success this year. The excitement within the team is audible in the voice of freshman, Kenzie Nguyen, who said, “I think if our team wins, that would be amazing and historic for Portola. It’s only the beginning, and I think for the next generation, it would be a great thing to look back on and be inspired by.” While the team recognizes that it is an achievement just to make the state tournament, the eagerness in Nguyen’s voice highlights their hope of rising to the occasion.

The team had set out at the start of this season with the goal of winning the Pacific Coast League for the first time. After accomplishing that, they are all on board with continuing to make history and represent their community. “It would put Portola on the map,” said Schottland. “And it would be a great representation of what our school can offer in terms of athletics.”

The team boasts future college players and those who hope to go pro, but more importantly, it helps foster a lifelong love for the sport. “Tennis has probably been the one thing that will forever stick with me in my life,” said Nguyen. “I love my team so much. They’ve helped me grow so much, and I can’t wait for the next few years to come!”

Her teammate and fellow freshman, Leanna Roman, had similar feelings about the importance of high school tennis and the Portola tennis program. “My goal from the very beginning was to bond with the team,” said Roman. “We’ve really accomplished that. I think our team has gone many places we didn’t expect, but it has seen a lot of goals that we’ve achieved.”

Portola will take on Canyon Crest High School in the first round of the state championships this Friday at the Claremont Club. Coach Schottland is counting on the team’s cohesion to give them a good showing this weekend, saying, “This might be one of the closest teams in terms of bonding I’ve ever seen. We’ve had highs and lows that really play a big role in our mindset going into Friday. We’re a small but mighty team!”

Coach Schottland’s words paint the picture that Portola is a team that is far greater than the sum of its parts. With a wide array of skill levels and aspirations, what unites them is a chance to play for something bigger than themselves. Regardless of how the tournament shakes out this weekend, Portola will enter this Friday as winners. High school tennis may not make headlines or feature the next breakout young professional players. But Portola’s story shows that high school tennis will always retain an altruistic spirit and a communal love of the game.