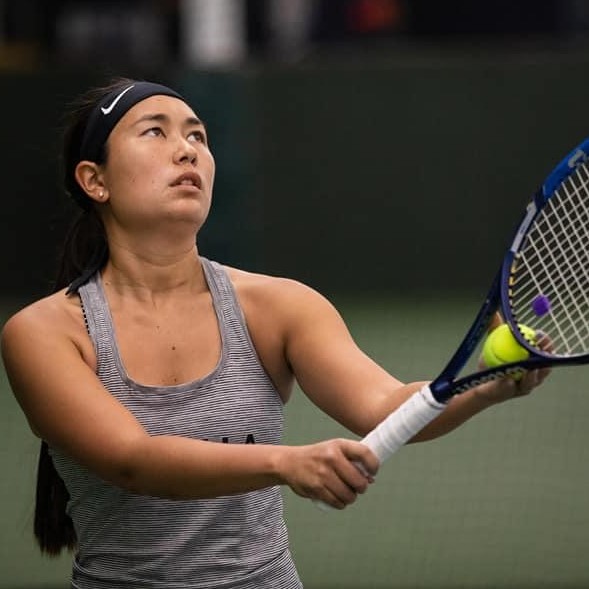 Her love for tennis and her desire to make tennis a lifelong profession inspired Kaitlin Tsue to achieve something no one like her has ever done before.

A few years ago, the 24-year-old Tsue expressed to her family that she wanted a career in tennis. But she worried her lifelong condition of intractable epilepsy and uncontrollable seizures would prevent her from achieving that goal. During her life, Tsue has suffered thousands of grand mal seizures. At the age of 12 the Tsue family made the decision to perform a hemispherectomy, a neurological procedure where half or a portion of the brain is removed to mitigate the seizures.

“I started playing tennis at the age of four or five and have always loved it,” said Garden Grove’s Tsue, who played in high school for three seasons at South High in Torrance.

Four or five years ago, Tsue expressed an interest in making tennis her vocation and wondered how she could remain in the game, despite her medical issues. She still suffers from seizures and has had six surgeries over the past two years.

The Tsue family sought out Lee DeYoung, a Palos Verdes tennis pro who was formerly the head tester for the California Division of the United States Professional Tennis Association, the governing body of tennis teaching professionals in the U.S. With the aid of a sponsorship from Wilson Sporting Goods and the generosity of the Glass family, a plan was formed where DeYoung would work with Tsue on scholarship four hours a day, five days a week, until she was ready to pass the test and become certified.

After two years, Tsue passed the test becoming the only certified USPTA tennis professional in the world who has undergone a hemispherectomy. “With Kaitlin, she’s just always loved tennis,” DeYoung said. “That was her go-to place where she could find comfort and find her sanctuary. For her to become a member of the USPTA is a big deal.”

Said Katilin: “I was looking for a coach to help me pass the test and the pros from the Palos Verdes Tennis Club suggested Lee DeYoung and he chose to help me. I wouldn’t have been able to pass the test without the help of Lee and the Glass family.”

“Her condition is lifelong,” DeYoung added. “Her entire life she’s had challenges, both physically and mentally. Sometimes doubts sank in. We worked on getting her to believe that she could do this, but I was able to teach her how to teach. And she’s become a very proficient player. Definitely a 4.0 or a little higher.”

Tsue loves to compete and has played well in the Special Olympics, both in Southern California and in the Xperience Games in Virginia, but she has found her calling in teaching others the game of tennis. The past four years, she has worked with Dee Henry’s wheelchair clinics at Biola University and in Mission Viejo with Dave Borelli. She has coached her teammates for the Special Olympics and also worked with Aceing Autism students.

“She loves to share the game with others,” said Kaitlin’s mother Leana, who remembers her daughter as young as three years old running after balls during her older brother’s lessons with South Bay tennis pro Keith Reynolds, who soon after began coaching Kaitlin. “We hope this can become a bridge to other things. We have been extremely fortunate to come across some wonderful coaches who have worked with her and shaped her along the way.”

“I see myself continuing to coach players with unique abilities,” Tsue said. “I’m going to keep on going with my groups in wheelchair tennis, Special Olympics and Aceing Autism because I feel a special connection with all of them.”

Besides continuing to teach tennis, Tsue said her larger goal is to one day become a motivational speaker and inspire others to learn the game of a lifetime.

“Kaitlin is a feel-good story and an inspiration to anyone who has had similar medical issues that they might look up to her and see that they can do it too,” DeYoung said. “She’s the type of girl that once you meet her, you just want to help her. She’s got a good heart. With Kaitlin, she’s just always loved tennis. That was her go-to place where she could find comfort and find her sanctuary. For her to become a member of the USPTA is a big deal.”

Tennis has given so much to Tsue, and vice versa. “Tennis helps you in so many ways and can relieve a lot of stresses of life,” Tsue said. “I kind of feel like maybe tennis was just meant for me.”