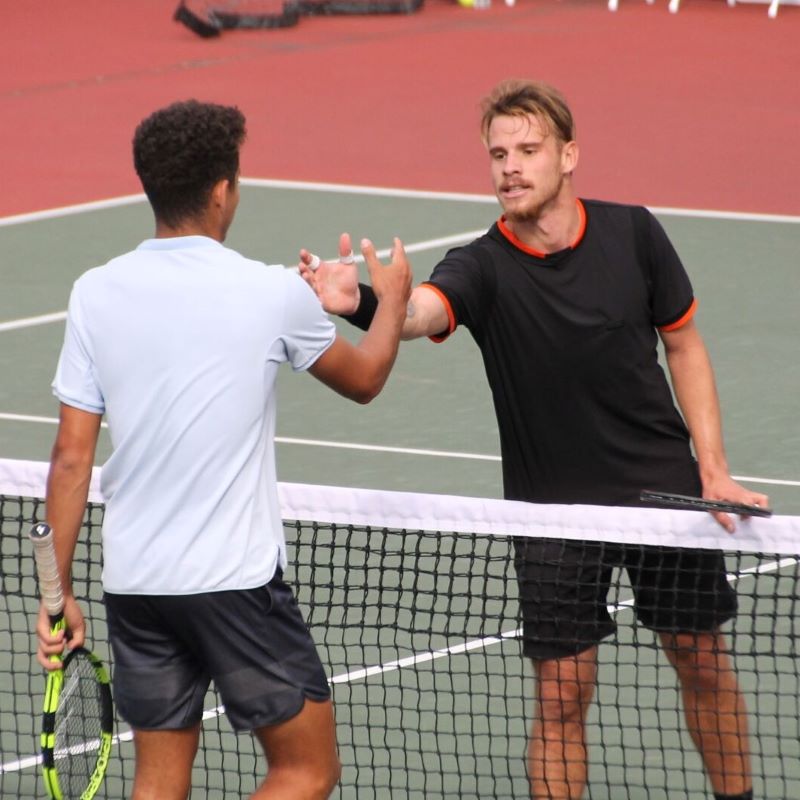 There was a lot at stake for Sell as he watched Osaka take out his former Bruins classmate Jennifer Brady in the Australian Open final to win the $2.75 million winners’ prize money, a small portion of which would be awarded in due time to Sell as a valuable team member of the No. 2-ranked player in the world.

For the past 15 months, Sell has served as Osaka’s hitting coach while the WTA star has lived in Los Angeles. One year ago, the 27-year-old Sell was Down Under as part of Osaka’s team, including new fulltime coach Wim Fissette. Shortly after, the March pandemic lockdown went into effect cancelling the BNP Paribas at Indian Wells and shutting down the WTA Tour for the summer.

But that did stop Brazil’s Sell from continuing to work and train with Osaka and he traveled with her team to New York helping Osaka win her second straight Grand Slam at the improbable 2020 US Open.

Three more months of training ensued with Sell helping Osaka once again get prepared to win a third Grand Slam and second Aussie Open title. Unfortunately, because of visa issues, Sell was unable to travel Down Under and be there in person for Osaka, who dedicated the winner’s trophy to “her team” during her post-match remarks.

“I’ve been sort of telling people before the tournament to watch out for her,” said Sell, who graduated from UCLA in 2015 with a Bachelor of Science degree in Geography at UCLA. “Before she left, it was the best I had seen her hit. I was pretty confident she was going to win it. She had that one close call, but she was so dialed in.”

Sell will tell you he’s much more than a hitter or backboard to Osaka.

“It really depends on the player, and the coach,” said Sell, who served as the Pepperdine Volunteer Assistant in 2016 and 2017 before heading out fulltime on the USTA Pro Circuit Futures and Challenger Tour. “Some women don’t want the input, some do. Naomi was incredibly respectful of me and was willing to listen. I’m the one hitting so I know what is happening and can tell her what we’re trying to do.”

Sell, who got to as high as No. 371 in the world rankings in July of 2018, said his relationship with Fissette has been an important part of the team dynamic. “We text each other about tennis and about her game,” Sell said. “He definitely likes my input and to see what I have to say. We discuss strategy and I definitely think I do more than just hitting because I feel like I can help.”

Sell added: “It’s a team effort, but she’s the star. But at the same time, she needs a team, and she trusts her team.”

Sell said Osaka’s strengths lie in her natural, physical gifts. “She can lift and run for hours and hours and her body can take the beating,” he said. “Serena [Williams] is her idol so she probably models here came from her. Big serve and big strokes. You can’t hit through her. Not even a guy can hit through her. You’d have to move her from side to side and you’re not going to have enough power. It’s this combination of physicality. Just like when Serena came on tour.

“She has all the Serena tools, and she’s younger. She has the work ethic and the mindset of a champion. It’s a combination and it’s hard to have all of it, but she has it. It’s actually pretty incredible to see.”

Sell remembers Brady as a “sweetheart” as a young freshman on the Westwood campus in 2014 before she left school a year later to pursue her professional dreams. “She decided to leave the USTA and move to Germany and work with a coach there and it’s really paid dividends,” Sell said. “She’s become one of the top six women on tour right now.”

Sell said he doesn’t have a long-term commitment with Osaka, and is not sure what his future holds, or if he plans to return to the professional tour.

“I’m not sure what I’m going to do. I’m not sure I would want to be a WTA Tour coach and travel around. I could see maybe doing some college coaching if I can. I still have that in my plans. But I want to ride it out as long as I can with Naomi and maybe win a few more Slams and to maybe help get her to No. 1 in the world.

“It’s a great gig but we’ll see what happens. There’s not really a tour right now to play for me anyway right now.”