PRATT: Irvine’s Glatch Returns For Love of the Game

The love of the game of tennis has kept Alexa Glatch on the court after battling back from injury after injury for half of her professional career.

The hour and hours of rehab have piled up over the years, so much so that the 30-year-old Irvine resident Glatch can’t even come close to totaling or estimating an amount of time spent in the gym trying to get back to the sport she loves so much. 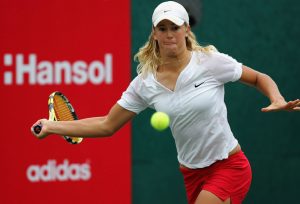 “Yeah, I’m 30 now. Crazy,” Glatch said recently, one day after returning from Charleston, S.C., where she won two qualifying matches and upset the No. 5 seed in a USTA $60,000 women’s Pro Circuit event. “I’m playing better tennis than I ever have in my life. It’s just getting the matches in and getting the confidence back.

“I’ve had some good wins. I feel like I can still play at a high level. It’s also exciting to see some new faces and different players. Just taking it one week at a time but it can be tough out there out there physically and mentally.”

In the second round in Charleston, Glatch won the first set against unseeded Anna Danilina of Kazakhstan before falling down 3-5 in the second, breaking back for 5-all before losing in three sets. “It was very, very hot and humid and on clay,” Glatch said. “I had some good matches and so I was happy. In the third set I kind of ran out of gas and she played a little bit better than me.”

For Glatch, who grew up in Newport Beach playing SoCal junior tournaments, returning to tennis after four hip and two knee surgeries is as close to a miracle as you can come.

“I mean, I’ve wanted to give up many times,” said Glatch, who has won 10 ITF singles titles and reached a career-high singles ranking of No. 102 in 2009. “I really love competing and playing, I always have. I love tennis more than anything. I just didn’t want to go out like that. I’ve had so many injuries throughout my career. I turned pro at 15 and I’m 30 now so I’ve been on tour for 15 years and I’ve been injured half of those years. So I really haven’t played a ton of tennis considering my age. Players are playing into their 30s now and I really wanted to give it one last shot. This is my last go-round. I’m glad I did it. I’m having so much fun out there playing.”

Glatch had hip and knee surgery in November of 2017 and sat out a year and a half before returning this past April.

She has had some good results and wins against some recognizable names, including a three-set final opposite Usue Arconada after beating former USTA Nationals champion Ashley Kratzer in the first round, and a big win over world #1 junior Eil Mandlik in the first round at Redding, Calif., before retiring mid-match in the second round.

In that match against Mandlink, Glatch suffered a slight torn quad muscle and was forced to sit out Templeton last week.

Currently ranked No. 467 in the WTA world rankings, Glatch said the goal is to get back to the WTA Tour and play the Grand Slams again. In 2005, Glatch reached the singles and doubles finals at the US Open juniors.

“It’s been really tough being out so long. I lost my ranking and had to start from zero. After this week I’ll be back in the top 450. My goal is to qualify for the Australian and French Open.”

Glatch will have to post some good results in her five remaining tournaments of the year, including a $25,000 Oracle Open series event in Claremont, one in Waco, Texas, two $60,000-level events and a $100,000 Houston tournament to close out the year.

Results matter, but just being on the court is some measure of victory for Glatch. “After my knee and hip surgery it took me a long time to get back and to recover,” she said. “I didn’t really know if I was every going to play again. My knee was just not good. I just feel so lucky that I even have the chance to play again and have another shot at it. I’m just trying to not take anything for granted and just enjoying stepping out on the court.”

Glatch said she still feels pain in her knee and hip, but is managing the pain. “Once you’ve had three surgeries on one body part it’s harder and harder to recover,” she said. “It’s feeling OK now. I know there are certain things I need to do and if I do those things, I’m going to be OK.”

Glatch lived in Delray Beach, Fla., for six years to train, but decided last October to move closer to friends and family in Orange County.

“I want to get back into WTA events and play all the Slams,” said Glatch, who last played in the French Open in in 2015 and went 1-5 at the US Open from 2005-2009. “At first I thought I would give it to the end of the summer and see how I’m playing. Now that that time has come, I’m feeling like I’m playing well enough to keep going.”

When she finally does call it a career, Glatch said she will likely turn to coaching, something she did while she was injured. “I enjoy coaching and helping kids,” she said. “I still enjoy that even now so I’ll most likely do some coaching. I have a lot to give back.”

Of course she missed the competition while sidelined, but also the travel. “I evened missed the airports. I’ve done it my whole life so I missed going places. I would start to go crazy just being in the same place and I was like, ‘I need to just get on a plane and go someplace.’ ”

She added: “I’m so happy to be back playing. I’m really enjoying it and want to do it as long as I can. As long as I’m having fun. I’ll always have time for other things to do in my life so they can wait.”