It’s November so that means it is USTA Junior Team Tennis Nationals time and another trip to the final year-end party for San Gabriel Valley League’s Sunshine B.A.G.E.L.S team and other Sectional winners from around the nation.

In pool play the squad will open against teams from USTA Sections Missouri Valley, Florida and the Midwest. Matches will take place at the McFarlin Tennis Center in San Antonio, Texas, with the finals set to take place Sunday morning.

What makes Lin’s involvement in running the San Gabriel Valley League and coaching multiple teams throughout the season unique is that he is practices Rheumatology, which is a specialty of internal medicine, for Kaiser Permanente. In simple terms, Lin says he treats people with arthritis.

“My kids are grown up and moved on to grad school, so that has allowed me the time to come out and keep working with the kids,” Lin said. “I love tennis so it’s something I want to keep doing.” 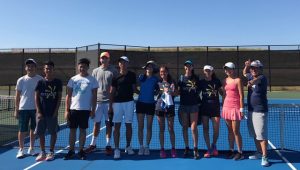 Antony Lin, at right, and his Sunshine team ready for JTT Nationals

“All of them feel this is a very special event and it’s a big encouragement and reward for the kids who work hard and reach their goals to compete at Nationals,” Lin said.

With his numerous trips to Nationals, Lin is still looking for that elusive national title. Three times his teams have come back with third-place bronze medals (2011, 2012 and 2017).

Back in 2016, I had the chance to meet Lin in person while covering the JTT Nationals in Columbia, S.C., for the USTA. You could tell that Lin had a special connection with his players and coaches. It was a season-long dream for those young players to make that trip to Nationals, but Lin had bigger dreams that day, telling me he wasn’t satisfied with playing matches at a public park and middle school.

“We would love to have our own home,” he said. “That’s my dream. I’d pour my entire retirement into it if I could.”