It hasn’t taken long for Jeanette Lee to establish herself as one of Southern California’s top USTA Junior Team Tennis Area League Coordinators. After just one year in that position, in fact, Lee has done nearly the improbable, leading a talented group from her South Bay/Long Beach/South L.A. area all the way to the USTA Junior Tennis Nationals championship match.

Competing in the Under 18 Advanced division at the recent JTT Nationals played in San Antonio, Lee’s Alta Vista Spinners lost to a more experienced team from Austin, Texas, falling in the final match, 59-24. 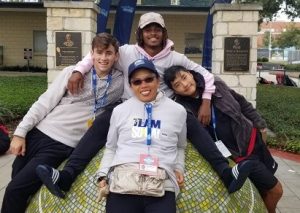 Lee’s Spinners, who play out of Redondo Beach’s Alta Vista Park, went undefeated at 3-0 in Pool Play against the best the Eastern, New England and Northern Sections put out there. In the semifinals, the Spinners beat rival Northern California for the coveted spot in the final.

“It all turned out very good for the kids and we knew we were ready to make a run to the final match,” said Lee, a Torrance resident. “We are a first-year team and they were so experienced and were the defending champions and had been there before.”

The Spinners were met with adversity early on, and overcame it triumphantly from the first match scheduled on Thursday night. Because of the threat of rain, matches were played that evening and a rain delay pushed the match past 11:30 p.m. at night. The Spinners beat a tough New York team and headed back to the hotel and returned the next day on little sleep to compete again.

Lee said one of the things she was proudest of during Nationals was that her No. 1 player Matthew Rowe, a high school senior, was one of just four players selected as a Sportsmanship winner. “Matthew exceeds good behavior and good sportsmanship and really deserved the honor,” Lee said, adding that Rowe is still deciding on what college he will attend and play for next season.