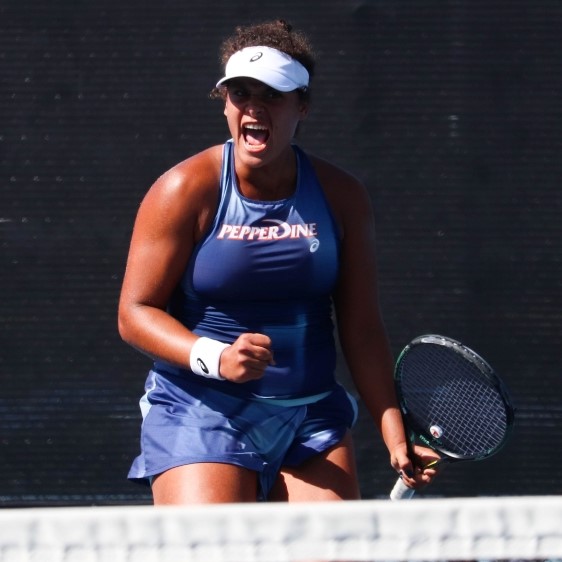 There were admittedly bumps in the road along the way, but Pepperdine women’s tennis coach Per Nilsson thinks his 24-year-old former Waves star Mayar Sherif has figured out what it takes to win on the women’s professional circuit.

All eyes will be on the Cairo-native Sherif next week as she has qualified for her second consecutive Grand Slam. She is currently in Melbourne preparing for the Australian Open, which begins Monday.

Currently ranked No. 128 in the world, Sherif has been on a mini tear since the French Open posting a 10-4 record. She won three qualifying matches in straight sets on the clay to qualify for her first Grand Slam, and then proceeded to take the opening set off world No. 2 Karolina Pliskova, falling 6-4 in the third set in the first round at Roland Garros.

Sherif, who played for Pepperdine in 2017 and 2018, then won the $15,000 USTA Pro Circuit Futures event in Norman, Okla. The calendar flipped and Sherif continued her strong play winning three more Australian Open qualifying matches as she now awaits her draw in the year’s first Grand Slam.

“The sky is really the limit for her,” said Nilsson, in his seventh years as the Waves’ head coach. “We only had her for two years, but her tennis IQ is really high. I had her at No. 3 singles, but I’m thinking she could have played No. 1, but we were loaded when she was here.”

Sherif spent her first two seasons of college tennis at Fresno State following her sister there. Once her sister graduated, Sherif decided to transfer and thought Nilsson and Pepperdine would be the perfect fit for her.

“I emailed her when she was a senior in high school to see if she was interested in college,” Nilsson said. “But I never got a reply.”

Nilsson calls Sherif “really stubborn,” but in a good way. “The first four or five months she was doing things she had never done before and it wasn’t easy for her,” he said. “But we worked things out. We still talk all the time and when she’s in the States she comes back and trains with us.”

Nilsson said Sherif has a big game-style fit for the pros with a heavy forehand and a great serve. “She’s a good athlete and has worked a lot on her movement,” he said. “She has a great kick serve. One thing that stood out in the French Open is that she had a really big first serve. One of her problems was she has always had such a good first serve she didn’t really feel like she needed to work on it. To take that next step and get to top 50 or top 25 she really has to use that first serve when she can.”

Sherif, who was ranked No. 1 in doubles with Christine Maddox in 2018 and advanced to the NCAA singles semifinals her senior year, now travels with a full-time coach and trainer which has elevated her game. “Once she figured out how to train every day, her confidence just grew,” Nilsson said.

As for the 2021 Waves, Pepperdine could have one of the top 1-2 singles lineups in college tennis with fifth-year seniors Jessica Failla and Ashley Lahey both electing to return to school after losing last season because of COVID.

“I think there are teams that are really, really strong on paper and I think we could be one of them,” said Nilsson, whose team already has a win over rival USC this season. “We could be in the mix, and that’s all you ask for. We’re going to give it a shot.”