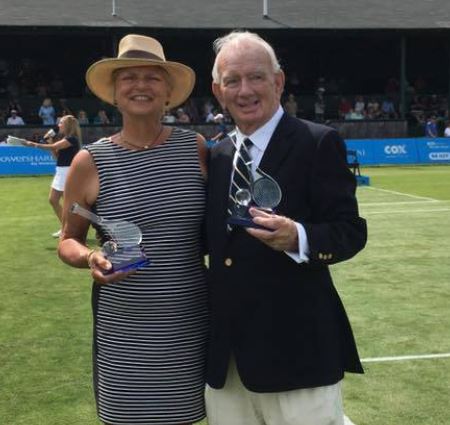 An unfortunate accident nearly a year ago has kept one of Southern California’s top teaching professionals off the court, out of work and in dire financial need, and the tennis community has come together to help in a huge way.

Burbank resident Don Henson could actually be better described as the tennis teacher to the SoCal tennis teachers as the certified USPTA Master Professional has led free monthly workshops to area teaching pros for the past 27 years. With the help of local tennis instructors like Roman Osa, Henson continues teaching through videos on his Tennis Teachers Institute website which can be found at www.tennisteachinst.com.

Last April, then 75-year-old Henson stepped off a ledge in a Northern California home that was steeper than he realized, breaking his femur in four places that required a steel rod and four screws.

Former USC tennis player Sean Brawley started a Go Fund Me page to raise money for Henson’s mounting medical bills and those who would like to help can click here: https://bit.ly/3amuSE3.

“I’m 76 and feeling 76,” Henson said. “When I got hurt I was 75 and feeling 50. I’m a tough guy from the hood, the ghetto actually; an Irish guy from Boston who grew up playing hockey. And I can tell you I’m never been in so much pain as my recent accident.”

Henson is still working with a physical therapist rehabilitating and a few months from getting back on the courts. He said he is thankful for all the contributions and offers to help him during this tough time.

In 1983, Henson became one of the original 18 USPTA certified Master pros. And remains one of only 130 or so in the world today who hold that distinction. I asked him what it’s like to be known as the king of all Southern California teaching professionals.

“I guess I’ve inherited that position, but it wasn’t what I set out to do,” said Henson, a 36-year Southern California resident who played college hockey and tennis at the University of Vermont. “But I care about the quality of teaching. I went into a research project many years ago on how to give more effective lessons. I thought it was a one-year project but it’s still going on.”

Henson’s good friend the late Vic Braden taught the first two teaching seminars in 1993 and Henson’s done them ever since. Originally the seminars that take place on the second Monday of the month (except for July and August) were held at Industry Hills (now Pacific Palms Tennis Center) where Pam Austin is still the director of tennis and also serves on the Advisory Staff of Henson’s Tennis Teaching Institute. Most recently they’ve been held at Los Coyotes Country Club in Buena Park.

Henson said he’s certified more than 7,000 teaching pros over the years and he can’t wait to get back out on the court.

“This man has helped more tennis pros, which has helped more tennis players, than just about anyone,” Osa stated. “Because he hasn’t been able to work for the past 12 months, Don has gone through his savings and continued to give on a regular basis to us the teaching pros. To make matters worse, with this Corona Virus, the clubs have been shut down making it impossible for him to work even in the limited capacity that he may be able to do. I personally have received so much incredible guidance and value from Don over the years. From his Monday get-togethers to his seminars and lessons.”