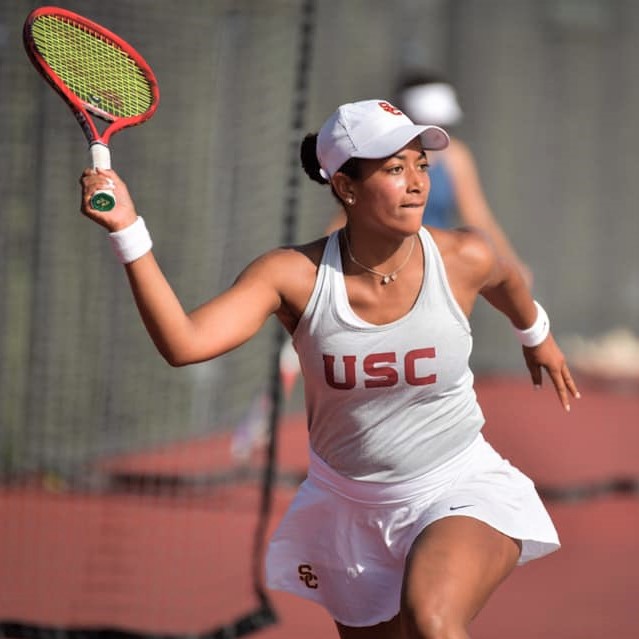 Southern California’s top women’s collegiate teams are kicking into full gear in anticipation of key conference match-ups that will make or break their spring seasons. Locally, teams from UCLA, Pepperdine, and USC are among the nation’s top programs vying for a shot at the NCAA D1 Championship.

The valuable opportunity to excel at the college level is not lost on players who’ve witnessed the roadblocks overcome by their predecessors. In some cases, those obstacles still exist. Black History Month has given these athletes a moment to reflect on the history of tennis in the Black community, and what it means to them as modern ambassadors of a decades-long struggle for racial equality.

At David X. Marks Tennis Stadium on the campus of USC, 20-year-old junior Salma Ewing grew up with the freedom to compete throughout the Southern California Junior and Open circuits, compiling a tennis resume that included prestigious titles at both Open Sectionals and The Ojai in 2017. That same year, she made a 10,000-mile pilgrimage from Los Angeles to South Africa, the place where her mother Reyana was raised under the dark cloud of Apartheid.

Just thirty minutes from where Reyana grew up in Cape Town, then-teenaged Salma Ewing won an ITF Pro Futures event at Stellenbosch. It was a transcendent moment spanning generations of the same family.

“Every day I step onto the court I think about the hardship that black female and male tennis players have gone through, just black people in general,” said Ewing, a Communications major who would like to be a sports broadcaster someday. “For me, it’s important because my mom grew up during Apartheid.”

Unlike Salma, Reyana – who first came to the United States as a tennis recruit for Georgia State University – never experienced the same luxuries in Cape Town that her daughter enjoys at USC today. But the proud mom has watched her daughter blossom through all of her hard fought signature victories.

“Every day I think about the struggles she faced,” said Salma, who slots currently in the Trojans’ #3 singles position. “I just try to be thankful and always gracious, and to work hard and keep my head down. She always tells me how good she was. She was ranked No. 1 in South Africa, but she couldn’t play in the Nationals because of her skin color.”

Asked if her own skin color has ever been a factor, Ewing said she has experienced racism on just a few occasions growing up. The experience proved not to be a deterrent, but a motivator.

“Sometimes it’s hard and I find myself saying this sport would be easier if I was white and had blond hair and blue eyes,” she said. “But that kind of adversity makes me stronger and if any adversity comes my way I can handle it differently than any other player.”

Across town, USC’s rivals show equal regard for the struggles and accomplishments of athletes who broke barriers while still establishing themselves among the game’s all-time greats. Jada Hart, a fifth-year senior at UCLA and one half of the nation’s top-ranked collegiate doubles team, is quick to recognize that today’s young African-American tennis stars are the beneficiaries of those who’ve come before.

“Althea Gibson, Arthur Ashe, Lori McNeil, Venus and Serena Williams have been incredible role models for me in their activism towards social justice as well the level of excellence they brought to the game,” Hart said. “Without their contributions they have made to this sport, we wouldn’t have the representation of Black tennis players we have today. Seeing the young players such as Sloane Stephens, Madison Keys, Naomi Osaka, and Coco Gauff do so well gives me inspiration that I can have a great career after college.”

“Black tennis history is a reminder for me to be grateful for every opportunity I receive,” said Forbes, an ITA All-American in 2020. “People like Arthur Ashe are the reason I am here on this team at UCLA. I am so thankful for the trailblazers that came before me so that I could have the tennis career I have today.”

The Trojans and Bruins will draw the proverbial line on Friday, February 26 when UCLA heads to Marks Stadium for the first regular season meeting of the two. The Trojans drive north on the 405 to the LA Tennis Center on Friday, April 16.