PRATT: UCLA alum pens memoir of his life on the court 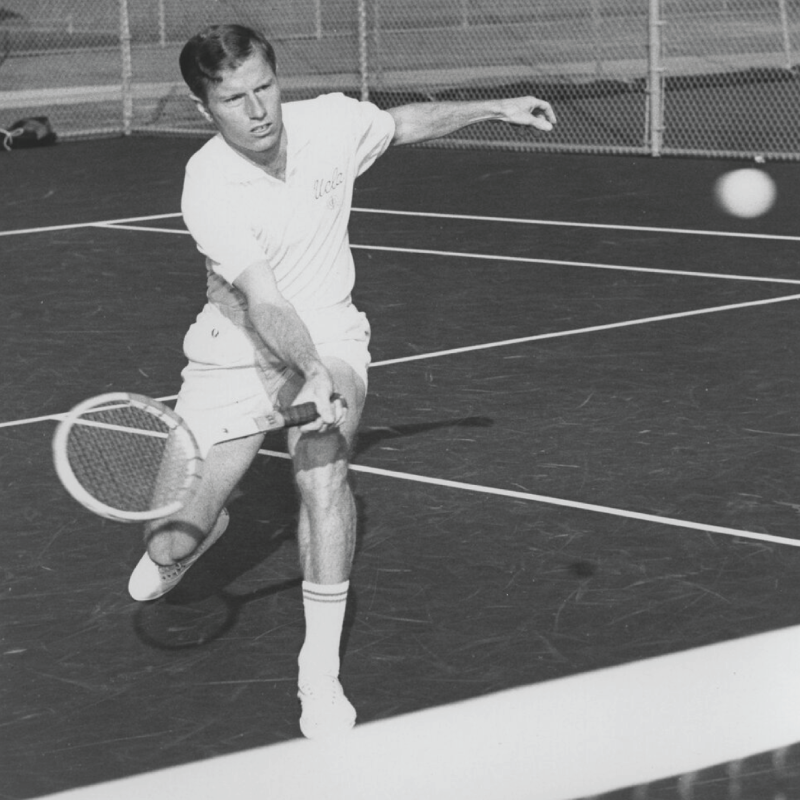 Southern California provides the colorful backdrop for Roy Barth’s newly released book “Point of Impact,” which dives deep into a rich tennis history that includes Barth’s earliest upbringing in San Diego and his experience as a nationally-ranked junior in the early 1960s.

Now settled in South Carolina, Barth was once a top collegiate player and two-time All-American at UCLA before joining the professional circuit at the dawn of the Open era. “Point of Impact” is Barth’s personal story shared through a series of life lessons he learned on the court that fueled his off-court success, a breezy and enjoyable read that includes a foreword from Barth’s longtime friend Billie Jean King.

Barth devotes space in his book and a meticulously memorized account of matches against some of the game’s’ all-time greats, including Stan Smith, Roy Emerson, Jimmy Connors, and Pancho Segura. There’s a chapter on playing with celebrities Johnny Carson, Charlton Heston, Alan King and George Peppard.

“I played competitive matches against the greatest tennis players of my era – and I lost more than I won,” Barth concedes. “But in order to lose to the great players, I had to earn the opportunity to play them in the first place. Which I did. I am fulfilled by that.”

He once held a two sets to love lead against Bjorn Borg at the US Open, had career wins against Tom Okker, Pancho Gonzalez, Vitas Gerulaitis, and Charlie Pasarell. He won sets off the great Rod Laver, but was unable to get the win. “I played Rod three times before I was confident enough in my game to forget I was playing the ‘legendary Rod Laver,’ ” Barth writes. “I finally took him to three sets, twice. My confidence grew.”

Barth said the idea to write the book came after his youngest son Sandon attended a South Carolina Hall of Fame ceremony with him and he heard someone ask what it was like to play Arthur Ashe in the 1970s.

“I was telling them the story of playing Arthur in the second round of the 1970 US Open at Forest Hills,” Barth recalls. “And Sandon said, ‘Dad, I’ve never heard that story. You’re going to have to start writing this stuff down.’ So I started writing down my memories of pro tournaments and that evolved into my memories of junior tournaments in San Diego and L.A. And then more memories of playing college tennis at UCLA.”

Barth said he fell in love with a new craft: writing. “It’d write stories about my first Wimbledon and eventually it evolved into business lessons I’ve learned through the journey of tennis,” Barth said. “I never realized writing was such a challenging thing. I’ve learned a lot.”

Just like he learned a lot from the many teachers growing up in San Diego. Barth’s father played tennis for UCLA in the 1930s but thought his son would be more successful learning from others. It started with Wilbur Folsom at Morley Field, followed by Maureen Connolly, Les Stoefen at the La Jolla Beach & Tennis Club and finally Glenn Bassett at UCLA.

“I learned something from all my coaches,” Barth said. “Les Stoefen taught me how to watch the ball properly and hit angle volleys, which became the best part of my game. Coach Glenn Bassett got me in great shape. He raised my whole level, and I went from a junior level to a high collegiate level just by my conditioning.”

In 1975 Barth made the move to the east coast become the first tennis director at Kiawah Island Resort in South Carolina, which has repeatedly been named the No 1 tennis resort in the world. His son now runs the facility renamed the Roy Barth Tennis Center with Roy serving as Director Emeritus. He is a member of five halls of fame, including the San Diego Tennis Hall of Fame.

To learn more and to purchase the book, visit Barth’s website: www.roybarth.com.