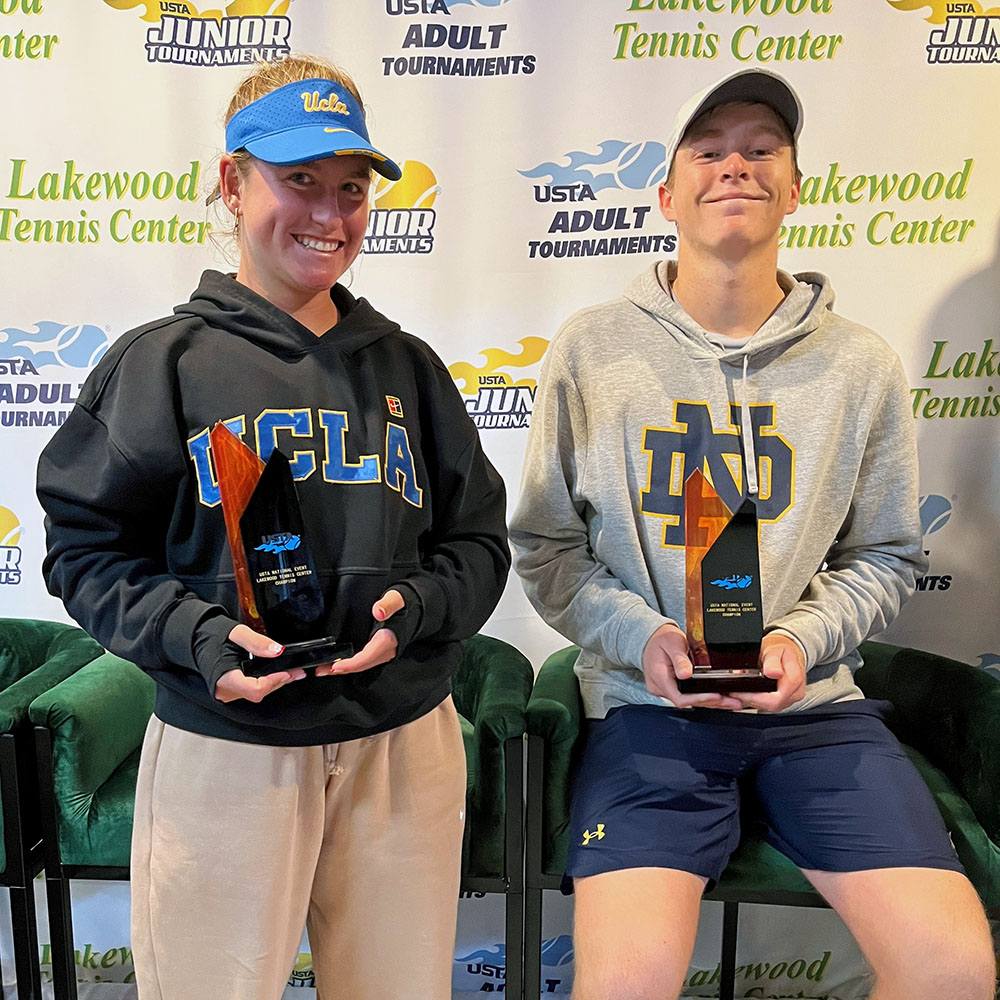 The No. 2-seeded Thompson of Mission Viejo, a senior at Saddlebrook Virtual Academy headed to the University of Notre Dame on a full-ride scholarship, outlasted No. 9 Rudy Quan of Thousand Oaks, 5-7, 6-3, 6-0, while Irvine’s top-seeded Lutkemeyer, a UCLA freshman, downed No. 4 Emily Deming of Fallbrook, 5-7, 6-1, 6-1.

With the win, Thompson and Lutkemeyer earned main-draw wild cards into the SoCal Pro Series first event of the year January 2-8 on the campus of Pepperdine University in Malibu. The SoCal Pro Series is part of the USTA Pro Circuit and ITF World Tour with $25,000 at stake on both the men’s and women’s sides. Quan and Deming will gain a free pass into qualifying.

Thompson said he and Lutkemeyer were always top-seeded at Junior Sectionals when they were entered as a team as far back as the 10-and-unders, but never won a mixed title together at the USTA SoCal’s signature June event. Thompson went on to win three other Sectional doubles titles during his junior career, including two with Kyle Kang in boys’ doubles.

“Rudy’s a tough player and someone who’s always had my number,” said Thompson, who survived a third-set super-tiebreaker in the semifinals against Miles Clark. “He was kind of moving me around a lot in the first set, but I was able to settle down and really get into a rhythm during the later parts of the match.”

The 6-foot-6 lefty Thompson said he’s always been a big hitter, but it’s only been the last three or four months that he’s grown an extra two or three inches taller. “I don’t know if I’ll get to Reilly Opelka or John Isner height (7-footers on tour). My mom’s not that tall so I’m not sure.”

Thompson’s Malibu appearance in a few weeks will be his first at ITF pro level event. “I never really even played any ITF in the juniors,” he said. “This is definitely a new thing for me.”

The decision to play for the Fighting Irish came early for Thompson, who fell in love with South Bend and everything about the school, spurning offers from the likes of UCLA, Michigan and Duke. “It was just the right fit, and I knew it once I got out there,” he said. “I was always a big UCLA guy, wore the hat and everything. Everyone was really shocked I didn’t end up there.”

But Westwood did happen to be the right fit for Lutkemeyer, who said she loves everything about being a Bruin. “UCLA was always my first choice,” said Lutkemeyer, who is living near campus in the dorms.

Lutkemeyer burst onto the junior scene winning the Sectionals Triple Crown in the 12s – singles, doubles, and mixed. Unlike Thompson, she has played four ITF pro-level events, including three on the SoCal Pro Series summer circuit, but only in qualifying with the exception of one main-draw appearance in Cancun.

“I stopped playing juniors at 14 or 15 in SoCal, and wanted to focus more on ITFs,” Lutkemeyer said. “That really got me prepared to face the better players and I’m super excited to get this win and play in the main draw in Malibu next month.”