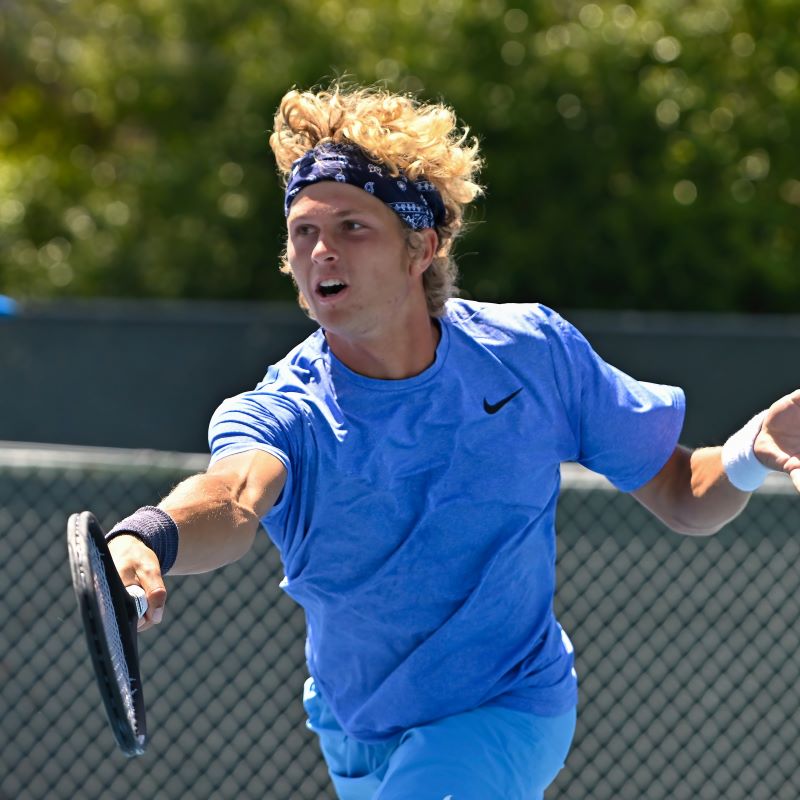 Gage Brymer’s winning streak continued as the Irvine resident won again Friday at the SoCal Pro Circuit ITF-level Rancho Santa Fe Open. It was the eighth consecutive ITF win for the No. 2-seeded Brymer, who defeated qualifier Lucas Gomez of Tijuana, Mexico, 7-5, 7-6 (5) in the quarterfinals. He advances to Saturday’s semifinals where he will face another qualifier in Minnesota high school senior Bjorn Swenson, who is headed to play at the University of Michigan in the fall.

What’s even more impressive is that Brymer has yet to drop a set during his run, winning 16 consecutive sets. The 27-year-old Brymer’s 2022 grind on the ITF World Tennis Tour has been nothing short of miraculous as he has been all over the globe chasing his pro tennis dreams. During the past 19 weeks of 2022, from Jan. 17 to present, Brymer has played 18 tournaments, including the past seven weeks in Monastir, Tunisia, where Brymer pulled out his third career ITF Pro Circuit title with five wins in the final tournament before heading back to the comfortable confines of Southern California.

Brymer has gone 24-15 through his 18 tournaments in 2022. He started the year with five events in Cancun, Mexico, then traveled to the Dominican Republic, Monterrey, Mexico, followed by California stops in Bakersfield and Calabasas, Ecuador, and the seven tournaments in Tunisia.

Last week’s NCAA Division I men’s national singles finalist August Holmgren, of the University of San Diego and Denmark, advanced to the semifinals in overcoming a scare from 18-year-old Rancho Santa Fe resident and high school junior Hudson Rivera. Holmgren came back to win 5-7, 7-5, 6-4. He will next face No. 3 seed Duarte Vale on Saturday at 10 a.m.

Holmgren will do double duty on Saturday as he has advanced to the doubles final along with partner Alexander Cozbinov of Moldova, a small Eastern European country that sits between bordering countries Ukraine and Romania. The pair beat Rancho Santa Fe’s Jacob Brumm and his ex-Baylor teammate, Tadeas Paroulek, in straight sets. Holmgren and Cozbinov will meet Abraham Asaba of Ghana and former Virginia Tech Hokie Mitchell Harper in a championship match to start not before 1 p.m.

Just like Holmgren on the USD men’s team, Solymar Colling is also the No. 1 player on the USD women’s team. The Orange, Calif. native Colling fell in her singles quarterfinal on Friday but did advance to Saturday’s doubles finals with 18-year-old Claudia De Las Heras Armenteras of Spain. The duo will meet unseeded Russian duo Maria Kozyreva and Veronica Miroshnichenko, formerly of Loyola Marymount University by way of Moscow, in a match scheduled not before 1 p.m.

It will be an international affair in the women’s singles semifinals as all four players hail from countries outside of the U.S. In a 10 a.m. finalfour matchup, Ya Yi Yang of Taipei will play No. 4 Kozyreva. In a match to follow the first men’s semis, Bunyawi Thamchaiwat of Thailand will take on No. 2 Talia Gibson of Australia in the other semifinal.

Weekend semifinals and finals matches will be live-streamed and commentating done by Cracked Racquets podcaster Alex Gruskin. To view the live stream, go to: https://www.youtube.com/watch?v=ZIw2WDL4BsY. Tennis Channel has also partnered with the SoCal Pro Circuit and will be providing coverage on their various digital platforms.

The highly anticipated debut of the SoCal Pro Circuit began in earnest Tuesday with the Rancho Santa Fe Open kicking off first-round main draw play in singles and doubles on the heels of concluding its men’s and women’s singles qualifying at Rancho Santa Fe Tennis Club.

McBride, who just completed her sophomore season with West Coast Conference runner-up University of San Diego, was a 6-1, 6-4 winner over Midori Castillo Meza. Keller, who just finished her junior year playing for the University of Arkansas, defeated Isabella Tcherkes Zade, 6-4, 6-3. Aubuchon, a 25-year-old past standout at Loyola Marymount, eked out a 6-3, 5-7, 10-5 (third-set tiebreaker) victory over Juliette Daries.

Fresh off of completing his storied collegiate career at the University of San Diego with a berth in the 2022 NCAA Division I men’s singles championship match in Champaign, Ill. on Saturday, outgoing senior August Holmgren embarked on his professional career on the SoCal Pro Circuit on Tuesday. The USD Toreros No. 1 partnered with Alexander Cozbinov as the No. 2 seed in the men’s doubles event to dispatch San Diego County teenager Trevor Svajda and Zheng Qing Ji, 6-1, 6-1, in the first round. Holmgren-Cozbinov is the highest seed remaining after top-seeded Felix Corwin and Ajeet Rai were knocked off by Abraham Asaba and Mitchell Harper, 6-2, 6-3.

Holmgren opens his singles account today against top-seeded Corwin, and Irvine resident Gage Brymer – a past CIF-Southern Section Individual champion at Irvine University High School who won the CIF Boys championship at the famed Ojai Tennis Tournament three years in a row – is the event’s No. 2 seed in the singles event.

Riding the momentum and confidence of a stellar collegiate season where he came within one set of bringing home a first national collegiate title to USD’s men’s program on Saturday, Holmgren has committed to playing all three San Diego County events within the SoCal Pro Circuit. While he acknowledged he’ll have to get used to coping with more defeat on the pro circuit, he did not hesitate in setting his expectations for the next three weeks.

“I want to win all of them,” Holmgren firmly stated.

For photos from the event, check out our PhotoShelter: https://ustasocal.photoshelter.com/gallery-collection/Rancho-Santa-Fe-Pro-Open/C0000gwZuUgyMLsw.