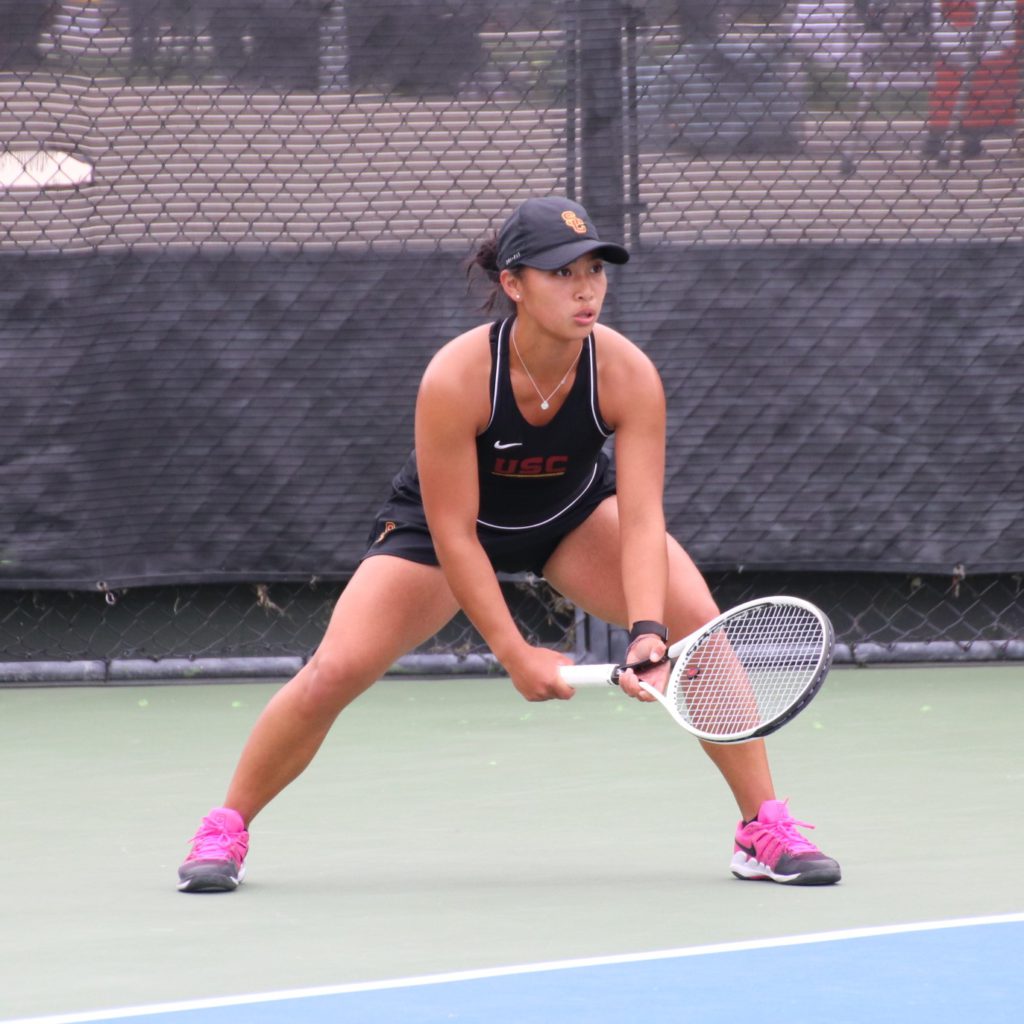 Her long commute days long over, Eryn Cayetano is now just living a short skateboard ride away from her classes and the tennis courts at USC.

A junior and the No. 6-ranked ITA singles player in the country, Cayetano said living in an on-campus apartment – and previously in the dorms at USC – has provided her a stable college experience and a closeness to campus she wasn’t able to have during her high school years.

Cayetano’s family moved from the Long Beach area to the Inland Empire of Corona when she was younger. But since both her parents still worked in Long Beach and wanted her close to them, Cayetano chose to remain at St. Anthony’s School in downtown Long Beach, sometimes dealing with as long as two-hour long commutes to and from. And with her tennis training north of Long Beach in Palos Verdes, that just meant more and more miles racked up.

“It was really from kinder(garten) to my senior year, I was always commuting,” Cayetano said. “Sometimes it would take an hour to get to practice. I would also play a lot in Carson as I was a USTA kid, and then started working with the guys over at First Break Academy.”

Cayetano said she and her siblings would often stay at her aunt and uncle’s house when they were little to avoid all the driving. Before she got her drivers’ license, the bus was also another option to get around, as well as ride sharing apps.

Once Cayetano learned about the six new ITF/USTA Pro Circuit $15,000 slated for six different Southern California locations starting May 30 through June 5 at the Rancho Santa Fe Tennis Club in San Diego County and continuing throughout the summer, she realized she would be spared some of the expensive travel costs associated with becoming an aspiring future professional tennis player.

“I’m very excited for these events and think it will be amazing,” said Cayetano, a two-time defending champion at the USTA SoCal Open Sectional Championships. “Honestly, it seems like most of the time the West Coast players are having to travel to the East Coast or farther places just to get points and find those opportunities. So, I’m glad they are doing these tournament and they are so close to home.”

In order to graduate on time, Cayetano said she is considering juggling a few summer school classes, which makes the close proximity to the SoCal tournament event that more attractive to her.

Cayetano, who began the 2021-22 college season as the top-ranked female in the nation, said there have been some hiccups along the way this college season as the Trojans have lost several close matches to teams they feel they should have beaten. The headed into the final month of the season with an even 10-10 overall record, 3-3 in the Pac-12.

“We have struggled, but we recently had a team meeting where we all just said we have to turn this around and know we can be the ones left standing at the end of the Pac-12 Tournament holding that trophy up,” she said.

Those Pac-12 Championships will take place at The Ojai starting April 20 with the finals in storied Libbey Park on April 23. It will be the first time Cayetano will play The Ojai as a Trojan.

“It’s honestly one of my favorite tournaments ever,” said Cayetano, a singles finalist in The Ojai junior 16s in 2017, a winner in the 18s in 2018, and finalist in the last women’s open finals held in 2019 before the two-year shutdown. “I can remember just sitting there when I was little watching the Pac-12 matches and thinking someday I will play Ojai in college. Honestly, the first thing I thought about in 2019 when they decided to cancel the season was, ‘Oh my goodness, I’m not going to get to play Ojai.’ ”

Cayetano failed to qualify for the NCAAs as an individual last year in singles and doubles but knows her high ranking will finally allow her to compete against the best college tennis has to offer.

“I’m just taking it one step at a time,” she said. “I try to have underdog mentality and mamba mentality at the same time. I know that my ranking is just a number. I have a lot to improve on. I feel like every year I’ve grown as a person and a player.”