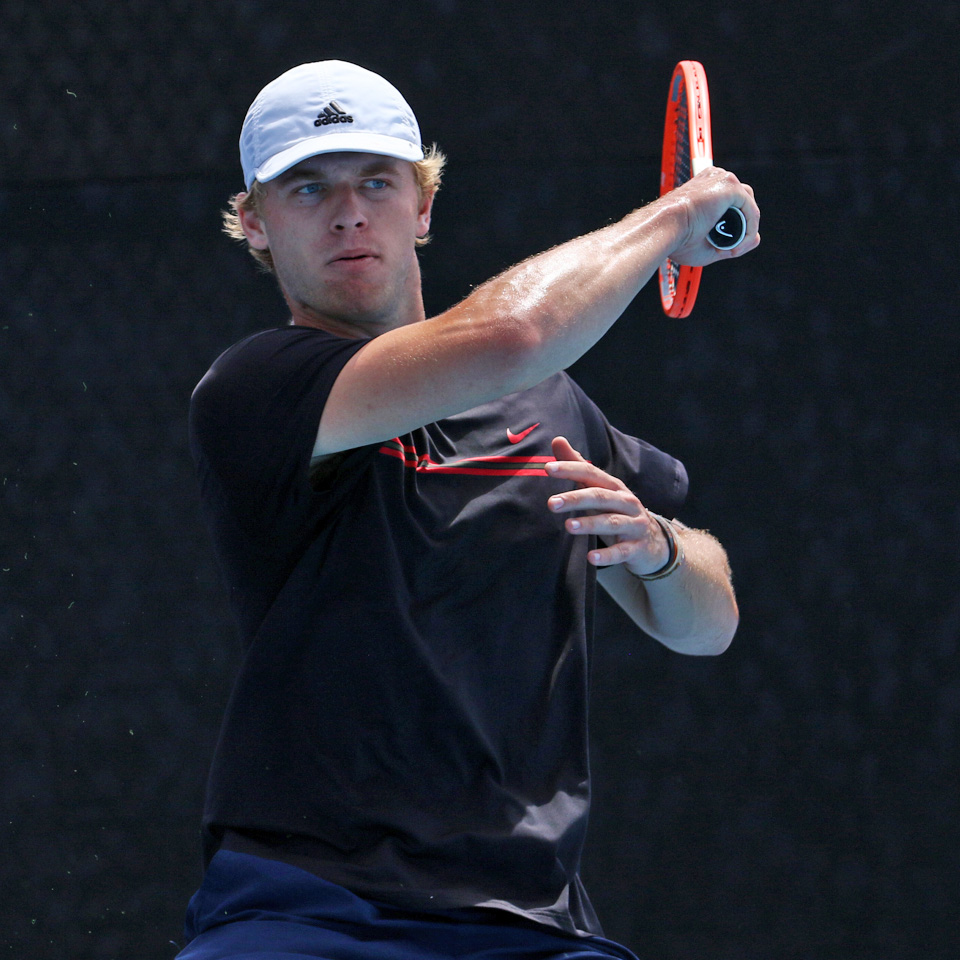 The women’s half of Super Saturday for Southern California was completed when UCLA freshman and Torrance resident Kimmi Hance, 19, and 24-year-old Makenna Jones, a University of North Carolina product and 2021 NCAA Division I women’s doubles national champion, combined for their first ITF title in capturing the women’s doubles final, 6-3, 6-3, over Russians Maria Kozyreva and Veronica Miroshnichenko.

It was the second overall ITF pro doubles title for Brumm, who won in Tunisia with the University of San Diego’s August Holmgren in 2021. Brumm, who played the 2021-22 NCAA season at Baylor as a graduate student after four years of tennis and an astrophysics degree earned at California (UC Berkeley), garnered 15 ATP Tour ranking points and shared the $930 first-place prize with Paroulek.

In what was the weekend’s most dramatic final, Vale, who captained the University of Florida to a 2021 NCAA Division I national championship and completed his collegiate career with the Gators in May, ended a three-hour, 45-minute marathon of a match by capitalizing on his fifth match point to down sixth-seeded Scottsdale, Ariz. resident and former Arizona State product Nathan Ponwith, 4-6, 7-6 (7), 7-5.

“It feels amazing. It’s something that I’ve wanted to do for quite a while,” said Vale, who doesn’t remember ever playing a longer best-of-three-sets match in any competition. “I’m so tired … I do feel like it couldn’t have been any other way for me. These types of matches always seem to come my way a little too often. I think this is a very typical match for me to have to win my first pro tournament.”

Vale lost the first set and was down 5-2 in the second set, where he eventually fought off five match points against on the way to forcing, and winning, a tiebreaker.

“Digging a big hole in the second (set) … I’m not going to give up. I’m going to try to make it as hard as possible on him and fight for every single point and see what happens. And in the end, when you do that, you give yourself a chance. You have to have courage and a little luck, and I think I had both today. It fell to my side, but it could have easily gone his way.”

Han, who will be a returning sophomore to USC’s women’s tennis team next season and has past competed in Junior Wimbledon and Junior US Open and won seven ITF Junior singles titles, broke through for her first ITF crown on the USTA Pro Circuit with a 6-2, 4-6, 6-4 triumph over 18–year-old Ya Yi Yang, of Chinese Taipei.

“Oh my God, I was so nervous. I feel more relieved than happy … the pressure,” Han said. “I just fight on the court, fight for every ball. Fight on!”

Monday begins the final San Diego County stop on the SoCal Pro Circuit, at Barnes Tennis Center in San Diego. The event features men’s and women’s main draws of 32 singles players and 16 doubles teams and is open to the public, with free admission. Doubles finals will take place on Saturday, June 18 with singles finals to follow on Sunday, June 19.

The dawn of the SoCal Pro Circuit has afforded Coronado resident Ryan Seggerman and Ramona native Jessica Failla the opportunity to come home with a chance to win their first singles titles on the ITF World Tennis Tour. Both are two weekend wins away from achieving these significant career milestones at the University of San Diego Open.

Seggerman, 22, has taken his wildcard berth all the way to the semifinals after powering past the USTA’s top-ranked Junior in the nation, Irvine’s 16-year-old sensation Learner Tien, 6-3, 6-4, on Friday. The Coronado High School alum will face sixth-seeded Nathan Ponwith, a Scottsdale, Ariz. resident and former Arizona State product, in the first men’s singles semifinal at 10 a.m. Saturday.

Ponwith recorded a 6-4, 6-4 triumph over Irvine resident and top seed Gage Brymer, who was runner-up in Rancho Santa Fe and won in Tunisia on the ITF Tour the past two weeks.

In the second men’s singles semifinal, China’s second-seeded Zhe Li – the tournament’s oldest player at 35 – takes on Portugal’s third-seeded Duarte Vale, who captained the University of Florida to a 2021 NCAA Division I national championship and completed his collegiate career with the Gators in May.

Failla, 24, was equally impressive as the top seed in the women’s singles draw. The Ramona High School graduate and 2014 CIF-San Diego Section Individual singles champion breezed past Mexico’s Midori Castillo Meza, 6-2, 6-2, to set up a semifinal matchup against No. 5 seed Ya Yi Yang of Chinese Taipei.

Seggerman and Failla have yet to drop a set this week. Seggerman was named First-Team All-Ivy League and reached the 2022 NCAA Division I Men’s Doubles Tournament Round of 16 as a senior at Princeton. Out of playing eligibility at Princeton, he will play as a fifth-year senior at North Carolina next season.

Failla, who won her only ITF doubles title in 2021, played collegiately at USC from 2015-17 and at Pepperdine her junior and senior years, leading the Waves to the 2021 NCAA Division I national championship match. Ironically, Failla is looking to claim her first ITF singles title on the courts at USD, her West Coast Conference rival as recent as a year ago.

Kozyreva, 23, recently completed her collegiate career at St. Mary’s College (Calif.) by advancing to the Round of 16 at the 2022 NCAA Division I Women’s Singles Championships and gaining NCAA Division I All-American status. She reached the singles final and won the doubles title at last week’s SoCal Pro Circuit opener in Rancho Santa Fe and again finds herself playing both draws entering the weekend.

Kozyreva and her Russian teammate, Veronica Miroshnichenko, won their doubles semifinal on Friday, 6-3, 6-1, and will play for the championship on Saturday against UCLA’s Hance and Makenna Jones (No. 3 seed), a 6-4, 3-6, 10-5 (third-set tiebreaker) winner over American Makenna Thiel and Chia Yi Tsao, of Chinese Taipei.

Fresh off of his first ITF professional singles title at last week’s SoCal Pro Circuit opener (Rancho Santa Fe Open), 2022 NCAA Division I men’s singles national runner-up August Holmgren (University of San Diego) returned to his collegiate home court (Court 1) and was extended to three sets in the first round before holding off Rancho Santa Fe resident Jacob Brumm, 6-4, 1-6, 6-3. However, Holmgren and partner Nathan Ponwith (No. 3 seed) were upset by La Mesa resident, Helix High School graduate and University of Texas sophomore SIem Woldeab and Eshan Talluri , 6-4, 6-4, in the first round of men’s doubles. Siem Woldeab also advanced through the first round of men’s singles, 6-3, 7-6 (4), over Baylor University product Tadeas Paroulek, of the Czech Republic.

In a duel between the tournament’s top two male Juniors, 16-year-old Irvine resident Learner Tien – the No. 1 (USTA) Junior in the country – made his SoCal Pro Circuit debut and rallied to defeat 18-year-old Rancho Santa Fe resident Hudson Rivera, 3-6, 6-4, 6-3, in the first round. Tien plays No. 4 seed Alexander Cozbinov, of Moldova, in Thursday’s second round.

Back in the fall of 2016, Ryan Seggerman was a 16-year-old Coronado High School junior who took advantage of a USTA wild card alongside his buddy Timmy Sah to advance all the way to the Irvine ITF Pro Futures doubles final falling to current Top 50 ATP player Mackie McDonald and Deiton Baughman.

Fast forward six and a half years and Seggerman once again cashed in on his wild card fortunes, this time in singles and at the inaugural SoCal Pro Circuit’s second tournament being played this week on the campus of the University of San Diego.

Now 22-years-old and a recent Princeton University graduate, Seggerman on Tuesday defeated rising Ohio State sophomore Jack Anthrop of Florida, 7-6 (1), 6-3, for his first ATP point in singles advancing to the second round where he will face Rancho Santa Fe’s Kalman Boyd on Thursday.

“I am really happy to get the win and my first ATP point in singles,” said Seggerman, wearing a Princeton Tennis t-shirt. “I really wanted that one. It was tough and close and just came down to a few big points in each set. I’m glad it went my way.”

Seggerman held the No. 1 ranking as a junior in Southern California in the 12s, 14s, 16s, and 18s. He studied operations research and financial engineering at one of the country’s most elite Ivy League schools. He has enrolled at the University of North Carolina in the fall and will play his fifth-year Covid season for the Tar Heels next season.

In what could be the match of the first round, two highly touted SoCal teenagers will battle it out on Wednesday as Irvine’s Learner Tien plays Rancho Santa Fe qualifier Hudson Rivera. Men’s top-seeded Gage Brymer, who advanced to the singles final at last week’s event, will open play Wednesday against unseeded Fletcher Scott at 10 a.m. Denmark’s August Holmgen, who beat Brymer in last week’s final and also won the doubles title, takes on qualifier Jacob Brumm of Rancho Santa Fe in his first round also at 10 a.m. Holmgren has been on fire the past few weeks having advanced to the NCAA Division I Singles final playing for USD.

On the women’s side, top-seeded Jessica Fallia of Ramona will take on fellow San Diego County player and wild-card Megan McCray of Oceanside. Both won first-round matches on Tuesday. In the only main draw women’s match played, Torrance’s Kimmi Hance of UCLA took out Katja Wiersholm in three sets. San Diego 17-year-old Katherine Hui fought her way through to the main draw winning her second qualifying match Tuesday.

The is the second week of the SoCal Pro Circuit with last week’s tournaments taking place at Rancho Santa Fe Tennis Club. Next week the circuit heads to Barnes Tennis Center in San Diego. Each tournament features men’s and women’s main draws of 32 singles players and 16 doubles teams. Each tournament is open to the public, with free admission.

Weekend semifinals and finals matches will be live-streamed and commentating will be done by Cracked Racquets and podcaster Alex Gruskin.

You can follow the men’s and women’s player field lists/draws/order of play for the USD event all week at the links below:

For photos from the event, check out our PhotoShelter: https://ustasocal.photoshelter.com/gallery-collection/USD-Pro-Open/C0000Hu5cxyAqs_U.