Pro Circuit: USD's Holmgren has more to give before moving on from San Diego - USTA Southern California
College News

Pro Circuit: USD’s Holmgren has more to give before moving on from San Diego 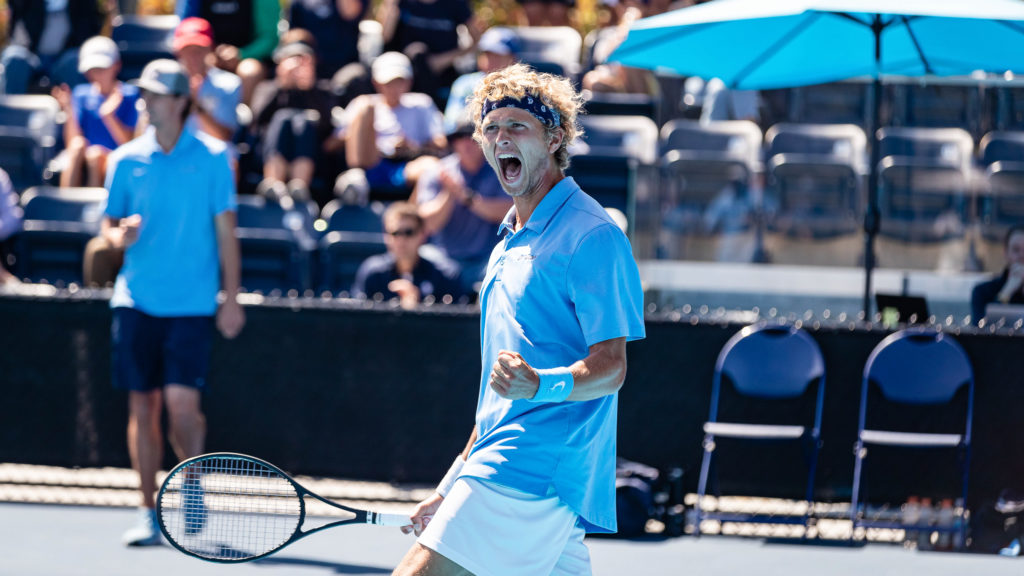 The most successful player in University of San Diego tennis history, August Holmgren was looking for a way to extend his five-year stay in his adopted hometown following the upcoming completion of his final semester.

With the addition of three USTA/ITF Pro Circuit $15,000 events in San Diego – the first leg of a new six-stop Southern California Pro Circuit starting May 30 in Rancho Santa Fe – the 24-year-old from Denmark’s wish was granted.

Two weeks after leading the Toreros to their seventh consecutive West Coast Conference Tournament Championship thanks to a gripping 4-3 win over rival Pepperdine in a match Holmgren called the “greatest college tennis match I’ve ever been a part of,” echoing the same statement head coach Ryan Keckley had made following the win in Ojai, Holmgren recently reflected on his spectacular career at USD.

“I can look back on my career and think about all the great matches we had as a team,” Holmgren said. “Looking at the big picture, we had new guys on the team, and everyone just came together and enhanced our team culture. We were a very together team and we were hoping to make it a little farther.”

Following the WCC title in which Holmgren faced a match point but rallied to win leading to the clinching victory at No. 2 by Gui Osorio, San Diego downed UC Irvine before falling to USC in the second round of the NCAA Regionals and ended the dual-match season with a 23-4 record, advancing to the NCAA second round for the eighth time in the last 11 years.

Taking a few well-deserved days off, Holmgren will next set his sights on the NCAA Individuals as he has qualified in both the singles and doubles competition to be conducted May 23-28 at the Khan Outdoor Tennis Complex in Champaign, Ill., after the conclusion of the team championship, which runs from May 19-22.

Holmgren was named WCC Player of the Year for the second consecutive season and was riding a 28-4 record in singles play, including 18 straight wins, heading into the USC match, where he fell in straight set to fellow Top 10 nationally ranked Stefan Dostanic. Holmgren was 7-0 in WCC singles matchups and was named to the All-WCC First Team. He won the ITA Fall National Championship and began the spring season as the No. 1 singles player in the nation.

There’s no doubt in Holmgren’s mind he can come back to San Diego an NCAA champion – in singles and possibly in doubles with partner Osorio. “Gui and I play very well together,” Holmgren said. “We both serve and return well. Especially when we are making a lot of returns, we are tough to beat.”

It was always Holmgren’s plan to return to his native Denmark to be closer to his parents and three older siblings and begin life as a pro tennis player following college. That’s until the SoCal Pro Circuit events extended his stay.

“I want to go back,” he said. “I have a good setup up there with Danish guys around my level who I will train and travel with and get support from the Federation. I’m confident that’s the right path for me and just happy to be starting it out with these ITF Pro Circuit at places I’ve played at like Ranch Santa Fe Country Club and my home courts at USD and at Barnes Tennis Center, where I’ve had some success.”

He said he hopes to return to San Diego someday and knows events like the upcoming SoCal Pro Circuit could lure him back in the future. “I’m going to miss San Diego – a lot,” he said. “I’ll have to come back for sure. Of course, I’ll miss the weather, but it’s the people and the relationships and lifetime friendships I’ve made that I will really miss.”