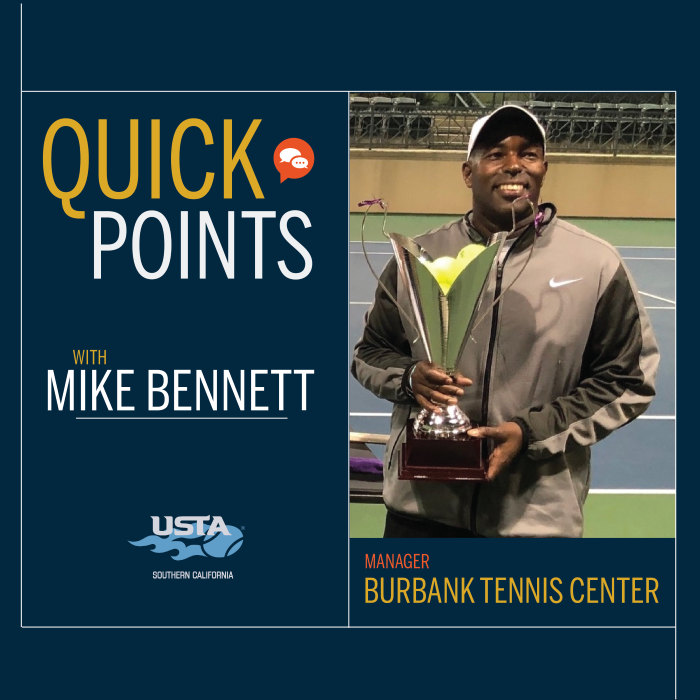 It’s been a long road to the corner office for Mike Bennett, who manages Burbank Tennis Center (BTC) in the heart of the Media Capital of the World. In 2009, Mike worked the front desk at BTC, a jack of all trades who could be found stringing racquets in the shop and slinging lemonade in the cafe. Bennett, who played tennis for Cal State Northridge before the program was dissolved, became part of the fabric of Burbank tennis by leading Live Ball activities and providing opportunities for underprivileged youth in the community. When the offer arose, Bennett moved into a management position with the club.  We asked Mike about the long spring of 2020, his average day on the job, and which Tinseltown celebrities he’s encountered in the valley.

Q: This has been a wild time for facilities and clubs that were mostly empty for the entire spring season. What’s the scene like in Burbank as players get the itch to return to tennis?

As you know it’s been a very weird 3 1/2 months. EVERYONE is anxious to play! While we were closed we got about ten voicemails a day asking if we were open, when we would open and why weren’t we open! We just reopened (in late May) and even though there are plenty of restrictions, everything has gone pretty smoothly. It’s good to be back!

Q: You’re on the court as much as you’re in the office. What’s an average day for you?

I wear several hats! I run several clinics, host tournaments and teach both group and private lessons throughout the year. I also design and implement promotions when we have them, manage our website, burbanktenniscenter.com, and contribute to the social media, @TennisInBurbank.

Q: Tennis has worked to provide unique play opportunities outside of standard tournaments. What are the best innovative play options that your members enjoy?

We’ve had a great relationship with the USTA and they’re always coming up with exciting special events for us to try! We’re also very lucky to have one of USTA Southern California’s Tennis Service Representatives as part of our teaching staff! We’ve had several meetings with (USTA) regarding new programs and they’ve always been extremely supportive! Last year we had great success with the Sip ’N Serve clinic series and this year we plan on running several Fast Four tournaments! Our TSR always provides us with opportunities to get in on the latest new events like last year’s Glowball, glow in the dark tennis!

Q: There’s a lot of star power in Burbank. Any memorable celebrity encounters?

I remember one year Redfoo from the group LMFAO was on a mission to get a wild card into the US Open so he spent the summer training with one of our coaches! Whenever he was spotted by the kids in the park they swarmed him and followed him onto the outside courts to watch him play! Over the years that I’ve been here the Bryan Brothers have showed up to film a commercial, Jelena Ostapenko has dropped by for a few days of practice, there was a reality show, Real Chance of Love filmed here as well as an episode of The New Adventures of Old Christine with Julia Louis-Dreyfus! We’ve had several social media stars film here and there was also a rumor that Matthew Perry from Friends used to stop in for our drop in tennis!

Q: A casting director stops by Burbank Tennis looking for tennis players for an upcoming movie. How are your acting chops? How many takes until your serve and volley are good to print?

Haha!! Actually just before the pandemic started Will Smith was here practicing for a movie he was filming! The production actually had a rather large, all day, casting call looking for players which was a lot of fun! My friends and relatives were saying “Get in there and audition!!” but they were looking for younger players from 8-20 years old I believe, so I missed the cut!