Fresh off Sectional win, Rivera has greater things in mind 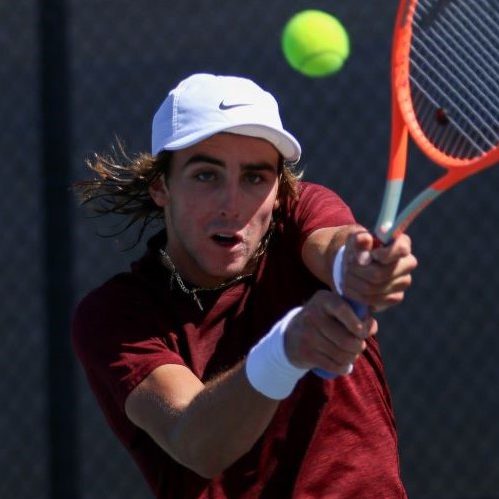 There was never a moment during Hudson Rivera’s recent long three-set quarterfinal match against August Holmgren that he didn’t feel like he had a chance to upset one of the best players in all of college tennis.

Just days after winning his first ATP ranking points and two rounds of singles as a wild-card entry at the SoCal Pro Circuit event being played at his home club the Rancho Santa Fe Tennis Club, Rivera found himself staring down the eventual champion and 6-foot-5 tall Holmgren’s booming serve, not to mention his rocket groundstrokes from both sides. He knew he belonged on the same court with Holmgren.

“I feel like my level is high enough to play with anyone, so I just went into the match preparing myself to win and I didn’t think he was any better than me,” said the recently turned 18-year-old Rivera, who eventually fell 6-4 in the third set against the University of San Diego’s premier All-American. “There were opportunities for both of us. Overall, it was a good experience, but I know my level. All it did was prove to me that I could play with the best of the best, which is pretty special. I’m pumped about that.”

Rivera has received another wild card into this week’s Jack Kramer Club SoCal Pro Circuit event and plans to play the next three tournaments of the inaugural circuit just weeks after winning the top prize in all of Southern California junior tennis – the Boys’ 18s Junior Sectionals title.

The entire Sectionals week – including the three-set finals win over Santa Barbara’s Masato Perera in the final – gave Rivera a chance to reflect back on the Boys’ 10s Sectionals title he won way back in 2014, needing a 10-7 third-set super breaker to win the crown over current rising sophomore at UC Irvine Lawee Sherif.

“I remember I won the 10s winning in the breaker, and I lost in the finals of the 14s,” said Rivera, who grew up in Las Vegas and Seal Beach before his family relocated to San Diego when he was 10. “I was hurt in the 16s but came in as the favorite this year so there wasn’t too much stress on me.”

A rising high school senior, Rivera came back from a severe elbow injury and eight months off the court to play the International Spring Championships and Easter Bowl ITFs in April, but didn’t fare well. He can’t wait to see what the next three weeks holds for him on the SoCal Pro Circuit before heading to Kalamazoo for the USTA Boys’ 18s Hardcourt Nationals.

“I’m playing the next three ITFs here and then Kalamazoo and going to slow it down a bit,” Rivera said. “Just to train and get better. These next few weeks are such a great opportunity for more. It’s very special to be granted a wild card and to be able to compete without having to go to Tunisia and be an alternate because I had no points. Now, I’m on the board and my professional career is off and running and I can take advantage of this. Without the points you can’t get far, and that’s what this SoCal Pro Circuit has given me.”

Rivera, who as a young child hit with Andre Agassi in Las Vegas, befriended another former top five ATP player in Rancho Santa Fe and has been a frequent hitting partner to local San Diego resident James Blake. “He has been kind of a mentor of mine,” said Rivera. “It’s so nice to get to hit with him and talk with him.”

Blake doesn’t miss a chance to give his college Harvard a nod when discussing Rivera’s future plans. As one of the nation’s top recruits, Rivera said he is currently weighing offers from the likes of Harvard, USC, UCLA, Stanford and Baylor. “I’m definitely going to college and hoping to make my decision very soon,” he said.

Because of his injuries and the Covid layoff, Rivera said he knows he’s not as well-known as other top SoCal players like Easter Bowl winner Alex Michelson and Top 40 ITF world-ranked Learner Tien.

“We’ve got a real good group and I play with them all the time,” he said. “We go back and forth. It’s great that they’ve been able to go over to Paris and to play Wimbledon. It’s unfortunate I’m not there, but I know I can play with the top 10 juniors in the world. I’m happy to be home and playing these events. My time will come.”